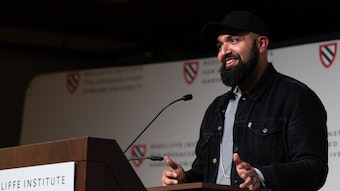 Play video
. . . first in thought, then in action. New Poems Diary of a Tap Dancer

Director and screenwriter Deepa Mehta will discuss her recent work with Salman Rushdie to adapt his 1981 novel Midnight’s Children for the screen—they collaborated closely as he wrote the screenplay—including the challenges of casting 30 principal actors in India and spending days and nights in intensive workshops inspired by the ancient Indian performing arts treatise, the Natya Shastra. Mehta will share her philosophy of filmmaking and how she walks the fine line between conventional storytelling and pure instinct. Following the lecture, she will be joined by Bapsi Sidhwa, who wrote the novel on which Mehta’s 1998 film Earth was based, to discuss the relationship between author and filmmaker and the evolution of story from print to film.

In conjunction with this lecture, the Harvard Film Archive will screen Mehta’s 2005 film Water—which was nominated for an Academy Award—on Sunday, March 4, at 2 pm.

Deepa Mehta began her career in her native India making short documentaries before emigrating to Canada. She made her feature directorial debut in 1991 with the film Sam & Me, which received a Caméra d’Or—Mention d'honneur at the Cannes Film Festival. Mehta is best known for her Elemental Trilogy, Fire (1996), Earth (1998), and Water (2005).

Water also traveled to many international film festivals, won three Genie Awards from the Academy of Canadian Cinema and Television, and was nominated in the Best Foreign Language Film category at the 79th Annual Academy Awards.

Mehta received the Vancouver Film Critics Circle Award for Best Director of a Canadian Film in 2006. Her other films include the documentary Let’s Talk About It (2007) and the features Camilla (1993), Bollywood/Hollywood (2002),The Republic of Love (2003), and Heaven On Earth (2008). Mehta is currently adapting to film Salman Rushdie’s acclaimed novel Midnight’s Children. The film, with a screenplay cowritten by Mehta and Rushdie, will be completed this spring.

The Rama S. Mehta Lecture at the Radcliffe Institute for Advanced Study was established by the late John Kenneth Galbraith and Catherine Atwater Galbraith in memory of Rama S. Mehta, who died in 1978. The purpose of this lectureship is to invite to Radcliffe and Harvard a distinguished woman in public affairs, the sciences, or the arts who has a deep understanding of the problems of women in developing countries.