Accompanied: The Artworks of Marilyn Pappas and Jill Slosburg-Ackerman 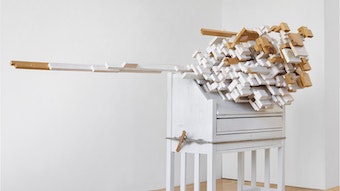 The virtual exhibition Accompanied: The Artworks of Marilyn Pappas and Jill Slosburg-Ackerman presents a pair of artists whose work was transformed by an abiding friendship. Pappas and Slosburg-Ackerman, both fellows at Radcliffe’s Bunting Institute in the 1980s, have sustained a conversation over four decades about artistic endeavor, studio practice, and pedagogy. The artists were members of the founding group of the Brickbottom Artists Building—one of the country’s first artist-developed live-work buildings—and are professors emeriti at the Massachusetts College of Art and Design. They have continued to work in adjoining studios for more than 30 years and have taught generations of artists.

This virtual exhibition, captured from Pappas and Slosburg-Ackerman’s studios, reflects on how their artistic practices were shaped by a decades-long friendship working in close proximity. What are the aesthetic and political possibilities of friendship, particularly in relation to women’s art? In friendship, we see a model of collectivity that is based not in the family or state, but in natural affinities—a mode of mutual reciprocity and exchange that resists easy codification and offers the potential of liberatory politics.

Based in the site of their artistic work and departing from the mythos of the individual (male) artist working in isolation, the exhibition considers the ways in which women's art is shaped by the conditions of its making. Their lives, and work, are deeply embedded in complex infrastructures of support; interdependent systems of responsibility and care. During the online exhibition run, audiences will also learn, through an array of public programs, about how women’s relationships endure during our current time of isolation and upheaval.

Marilyn Pappas (b.1931) is an artist based in Somerville, Massachusetts. Pappas creates large-scale textile works developed from sculptures of ancient goddesses. The three-dimensional figures stand at the intersection of sculpture and garment and imagine ancient artworks as they evolve and survive over centuries. Although broken, faded, and disintegrating, the works are metaphors for the strength and power of women in the #metoo era. Pappas’s work has been exhibited in many galleries and museums during the course of her over-60-year career, including the Currier Museum of Art, the deCordova Sculpture Park and Museum, the de Young Museum, Fuller Craft Museum, the Halsey Institute of Contemporary Art, the HUB-Robeson Galleries at Pennsylvania State University, Krannert Art Museum, the Museum of Arts and Design, the Museum of Fine Arts, Boston, and the Staten Island Museum. Pappas is a professor emerita at the Massachusetts College of Art and Design, where she taught from 1974 to 1994 and was chair of the 3D Fine Arts program for nine years.

Jill Slosburg-Ackerman (b. 1948) is an artist based in Cambridge, Massachusetts. Slosburg-Ackerman’s metaphysical, hybrid wood sculptures, installations, and drawings made from discarded furniture, sawdust, and wood scraps emanate from an examination of natural forms and phenomena. Originally from Omaha, Nebraska, she is inspired by the pragmatism of the pioneers who settled the Great Plains, material culture, and the history of art. Slosburg-Akerman’s work has been exhibited for 50 years in numerous galleries and museums, including at the Cohen Arts Center at Tufts University, Concord Center for the Visual Arts, the Cummings Art Galleries at Connecticut College, the deCordova Sculpture Park and Museum, Fuller Craft Museum, the Museum of Fine Arts, Boston, the Nightingale-Brown House at Brown University, the Rose Art Museum, UMass Dartmouth, and the Worcester Art Museum. She is a professor emerita at the Massachusetts College of Art and Design, where she taught from 1974 to 2018. Her book “Restless Shelves/Pscychophant” is forthcoming.