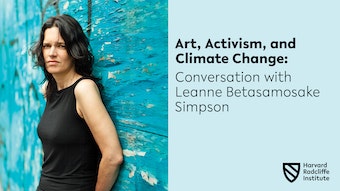 Harvard Radcliffe Institute and the Mahindra Humanities Center at Harvard University present a series of virtual programs focusing on the intersection of art, activism, and climate change. The programs will feature leading figures in the arts and humanities engaging in conversations about their commitment to art and activism as a means to combat climate change, the origins of their interests, and their hopes for the future. With so much at stake for our planet, the work of artists and activists is essential in reaching and moving the public, as well as scientists, policy makers, and journalists. Such cross-disciplinary approaches are central to the multi-year initiatives of both Mahindra and Radcliffe focused on climate change, with a particular emphasis on environmental justice.

The second program in the series will feature Angélique Kidjo in conversation with Vijay Iyer.

Harvard Radcliffe Institute gratefully acknowledges the Ethel and David Jackson Fund for the Future Climate, which is supporting this event.

Five-time Grammy Award winner Angélique Kidjo is one of the leading artists in international music today, with 16 albums to her name. Time Magazine called her "Africa's premier diva," and named her one of the world’s 100 most influential people in 2021. She is the recipient of the 2015 Crystal Award given by the World Economic Forum, the 2016 Amnesty International Ambassador of Conscience Award, the 2018 German Sustainability Award, and the 2023 Vilcek Prize in Music. She advocates on behalf of children as a UNICEF and OXFAM Goodwill Ambassador and has been the spokesperson for the AFAWA (Affirmative Finance Action for Women in Africa) initiative. Kidjo’s charitable foundation, Batonga, supports the education of young girls in Africa.

Kidjo’s latest album, Mother Nature, is rooted in a deep understanding of musical tradition, while at the same time looking forward. “This album is a love letter to Mother Earth and all the values we hold dear: truth, trust, love, connection,” says Kidjo. “For our own survival, we need to recognize the humanity that we all share and learn how to live together. There’s just no other way.” As a performer, Kidjo’s striking voice, stage presence, and fluency in multiple cultures and languages have expanded her following across national borders. She combines the West African traditions of her childhood in Benin with elements of American R&B, funk, and jazz, as well as influences from Europe and Latin America.

Composer and pianist Vijay Iyer is the Franklin D. and Florence Rosenblatt Professor of the Arts in the Department of Music and of African and African American Studies at Harvard University. His musical work is grounded in the traditions of South Asia and West Africa, the African American creative music movement of the 1960s and 70s, and the lineage of composer-pianists from Duke Ellington and Thelonious Monk to Alice Coltrane and Geri Allen. He has released 24 albums, most recently Uneasy (ECM Records, 2021), and composes original works for classical ensembles and soloists.

Iyer was recently named 2022 Pianist of the Year by the Jazz Journalists Association and has been described by the New York Times as a “social conscience, multimedia collaborator, system builder, rhapsodist, historical thinker, and multicultural gateway.” He has received a MacArthur Fellowship, a Doris Duke Performing Artist Award, a United States Artist Fellowship, the Greenfield Prize, a Grammy nomination, the Alpert Award in the Arts, and two German “Echo” awards, and was voted DownBeat Magazine’s Jazz Artist of the Year in 2012, 2015, 2016, and 2018.