The filmmaker on location in Liberty Square. Photo courtesy of Faren Humes

A filmmaker uncovers recurring patterns as she stitches together folklore, dreams, and stories.

For some time, the independent filmmaker Faren Humes, who is the 2021–2022 Radcliffe-Film Study Center Fellow and David and Roberta Logie Fellow, has melded narrative and documentary conventions to illuminate the Black experience in and around Miami. Her award-winning short Liberty (2019) was filmed on location in the Liberty Square neighborhood with local talent, and now she’s expanding this approach in a full-length film. We spoke with her about her filmmaking methods and the increasingly collaborative nature of her work in progress.

Radcliffe Magazine: Your recent and in-progress work lies somewhere between narrative and documentary. Why are you drawn to this approach?

Faren Humes: I’ve observed over the years how film can act as a bonding tool, mobilizing certain intentions or desires of the community members I’m working with. The melding is just a natural progression. Myth exists, fiction exists, and they are not mutually exclusive with the real. I’m working in fiction and documentary—but really what I’m doing is giving myself up to what is there. You know, we make stories for ourselves. That’s a part of cultural production. We have folklore, we have dreams, we tell ourselves stories and lies. All that is real (in that they exist and continue to), and so are we. I’m always reckoning with that interplay and with finding its significance.

RM: Your recent short Liberty and your Radcliffe project, Don’t Stop Get It Get It, are centered around the Liberty Square public housing development in Miami, currently under redevelopment. What attracted you to the neighborhood and its people?

FH: Liberty Square is the largest public housing site in the southeast. It began in the 1930s, and was an offshoot of one of Miami’s original Black towns, Overtown/Coloredtown. Over years and with various extractive policies, it’s been broken up. Liberty City, to me, is the mother root of Black Miami from which surrounding subsidiary Black communities come from, including mine. My father was born in Liberty City, in Liberty Square. His family moved to adjacent West Little River, where I was born, then our family moved to another nearby Black neighborhood, Carol City, where they now reside. It’s a clear away-from-the-core trajectory that’s refracted throughout the county. And if you look at it from overhead, it starts to look like a root system, and at the base is Liberty Square.

I’ve been sitting with this intentional stratification of Black Miami, as I’m seeking out the stories of Liberty City that might lend insight to continuance. Despite policies encouraging surveillance, negligence, and transience, Liberty Square has remained. I’m paying close attention to that. I have an interest in what endures and those who thwart disruption. What are the conditions that cause some communities to shift and pass through and the conditions that lead us to “stay put,” as [the writer] Sharony Green puts it. Through a lens of duration, I want to visually honor Liberty Square for being at the helm of thwarting all along. It’s existed—some would say thrived—for nearly a century, in spite of. And through all of that, it still feeds all of the various portions of Black Miami, so I have a vested interest in seeing to its flourishing. I believe that these themes of the community’s conscious and unconscious reckonings spill over to all of Black Miami. 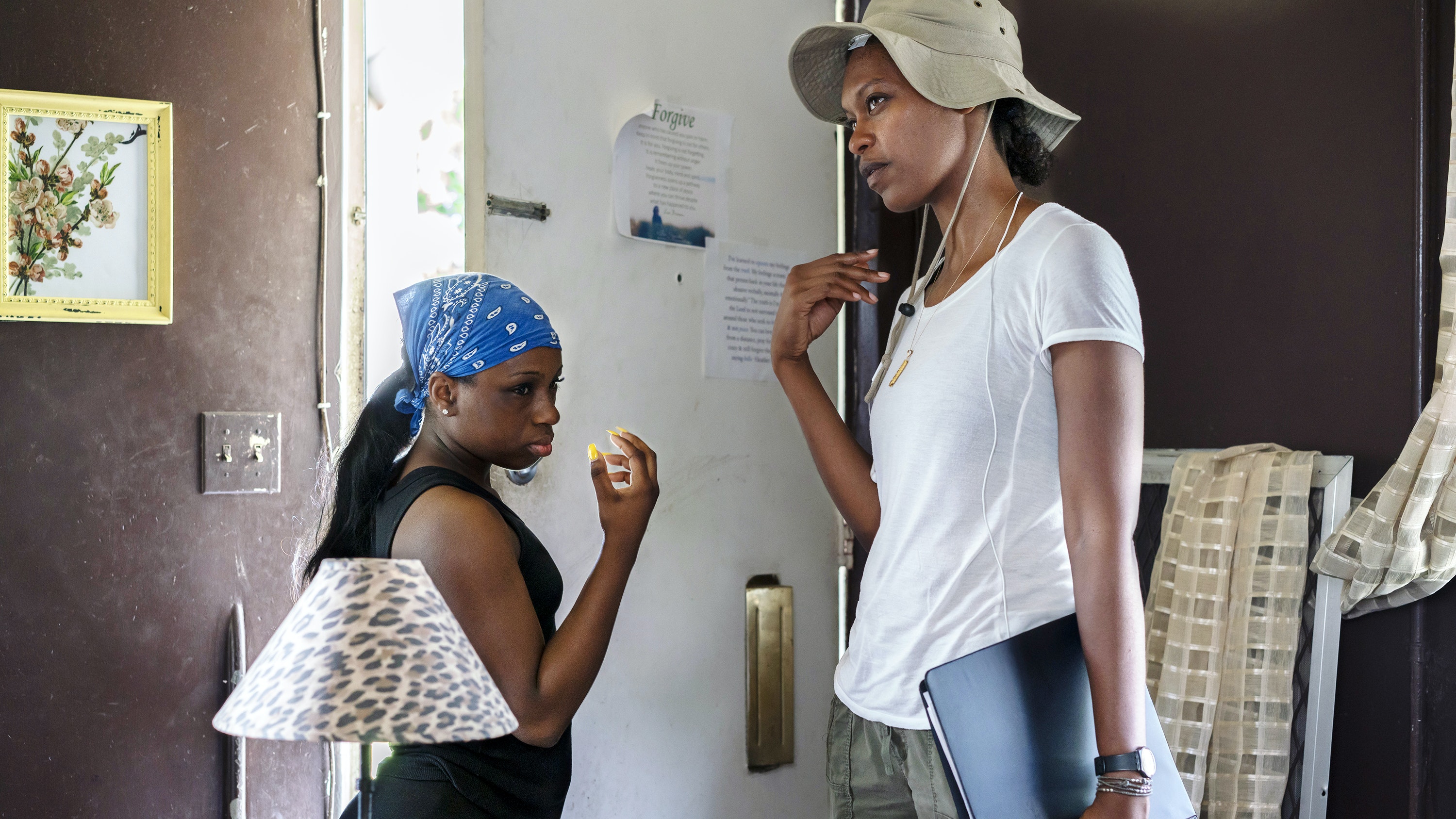 RM: Speaking of that, you go directly to the communities for your actors, so you’ve worked quite a bit with nonprofessionals. What’s that been like, and what does it mean for your process?

FH: I have a lot of gratitude for the residents and community members who work with me. This particular film has gone through so many phases, especially with the pandemic. It started predominantly narrative, but I started realizing that just the process of listening was going to be one of the most critical parts of the film. From that stage, I began interviewing as many residents as possible, setting them up with personal dream diaries and asking them about their days, their memories, and their thoughts about the impending future. The more I did, the more any narrative that I thought these interviews might confirm started to unravel. It’s become a process of looking at Liberty Square, Liberty City, and Black Miami from a materialist framework of the information being offered to me. One person might talk about a dog or their impending move or pest control or anything—it’s one thing to take in the content of what they’re saying and another thing to consider the compositional matter of what they’re saying. From there, I’ve been finding recurring patterns to reconstruct them into a collective narrative that might have something to say about what the community is reckoning with, and about ways to approach the things sitting deeply in our consciousness. Therein lies my interest in dreams, as well.

RM: I’m glad you mentioned your interest in dreams. It seems that dreams figure heavily in the film. Tell us more about that.

FH: A couple of years ago, I came into contact with [the German psychoanalyst] Charlotte Beradt’s book The Third Reich of Dreams, where she collects the dream journals of hundreds of denizens affected by the Nazi regime. In each chapter, she does a synthesis of the dreams and how they might be counterbalancing the preoccupations of these people in their waking lives. I had just finished the short film in Liberty Square, and I was making connections between communities under occupation and those of the dispossessed or displaced communities. For me, the melding of various conscious states featured in Mohammad Malas’s documentary Al-Manam (The Dream) (1987) and in Hussein Shariffe’s documentary short The Dislocation of Amber (1975) opened up ways to value our dream worlds as we address matters of our waking lives.

I believe our dreams work in that way to counterbalance the things that need attending in our waking lives. In communities like Liberty Square where there are so many external forces designed to compromise agency, I’ve found that talking about, illustrating, or visualizing dreams, and incorporating them into a narrative, offer ways to reorient our preoccupations away from those forces while investing in a practice of invoking desired realities and possibilities. Portraying these dreams through a lens of duration is a way to follow an inquiry of our unconsciousness with as little interruption as possible. And I think that is such a vital notion for Black folk: to do our desires without ceasing.

I realize it’s more like a quilt or collage in that the film is communal. It depends on the hands of the community folks invested in it.

RM: You mentioned that your project has changed a lot since its inception. What do you think the final project might look like?

FH: It’s become a more adaptive film by need and nature. I’m thinking of it as a composition as opposed to a linear, this-happens-then-that-happens piece—I don’t even think that’s possible at this point. I realize it’s more like a quilt or collage in that the film is communal. It depends on the hands of the community folks invested in it. It’s working with archival video footage, news clippings and footage, public speeches, interviews, personal diaries, verité capture, and the interpolated fictional narrative built from the dreams and expressed desires of community members. I’m just trying to see how all of these materials that are coming to me speak to each other and form patterns. My care will be dedicated to standing back and trying to stay clear of biases, to look at the compositional nature of all of these components, to find some shared knowledge.

Ivelisse Estrada is the acting editor of Radcliffe Magazine.