Epidemiologists, scientists, and other researchers share their knowledge about how to understand and combat diseases such as Zika and Lyme and social scourges such as the opioid and gun-violence epidemics. 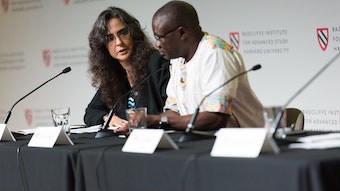 Thanks to advances in medicine during the past century, diseases such as measles, mumps, and smallpox have declined dramatically, along with mortality caused by them. We are still, however, in the grip of contagion: new diseases such as Zika and Lyme, old threats such as malaria and Ebola that affect developing countries, and even social epidemics such as opioid overdose and gun violence.

Responding to the world’s grand challenges—whether delivering clean water to villagers or clean needles to addicts—requires research, collaboration, and cooperation among social institutions.

During a daylong Radcliffe Institute science symposium, titled “Contagion: Exploring Modern Epidemics” and organized by Academic Ventures, a diverse group of scientists, public health professionals, and social scientists discussed the threats that plague our modern world and how the public health community hopes to combat them.

We are living in a new era of epidemics, according to Marcia Castro, an associate professor of demography at the Harvard T.H. Chan School of Public Health, one in which cities in the developing world are growing more densely populated while facing considerable infrastructure challenges and a lack of resources. People, information, goods, and pathogens are moving around the interconnected world faster than ever.

This era has all the ingredients to foster the spread of infectious disease. “There is nothing a pathogen likes more than a densely populated slum,” said Caroline Buckbee, a professor of epidemiology also at the T.H. Chan School. To confront these challenges, especially in the developing world, Buckbee said, local public health efforts need to combine research, surveillance, and capacity building. She pointed out that over the next 30 years the world’s cities will grow by 2.5 billion people, with 90 percent of the growth happening in Asia and Africa, and those public health entities need to prepare.

The importance of bolstering local public-health capacity emerged as a major theme of the conference, and there was no better example of how to do it than in Nigeria during the Ebola outbreak of 2014. Christian T. Happi, a professor of molecular biology and genomics at Redeemer’s University, in Nigeria, recounted his experience during the crisis.

In March of 2012, a remote village in Guinea was plagued by an Ebola outbreak. Happi was concerned that it might spread with devastating effect from the village where it began to more populous areas such as his hometown of Lagos, a city of 22 million. The rest of the world watched and waited while Happi, eager to use new genomics tools to understand and contain transmission, sprang into action. Preparing for the worst, he called on colleagues from as far away as the Broad Institute and Harvard to help strategize and carry out a plan to contain the spread of the virus. He also trained a group of Nigerian epidemiologists on the ground to use genomics tools to diagnose and isolate the newly infected.

In July, when Ebola arrived in Nigeria, Happi’s team members were ready. They implemented a rapid diagnostic test they had developed and worked with the government and health care systems to isolate patients and prevent the spread of the disease. Nigeria was spared the worst. The Ebola outbreak that raged for 12 months across western Africa, claiming 11,000 lives, killed only eight people in Nigeria over a four-month period in 2014. This accurate and rapid response earned Nigeria praise from the World Health Organization for having done “world-class epidemiological detective work.”

Answers in the Data

Detective work and surveillance are key to identifying new health threats, because providing an early warning system can prevent an outbreak. In the modern world, it is easier than ever to gather data, whether through DNA sequencing tools that identify what pathogens are present or the use of cell phone records to track how people are moving around the landscape. Many tools are available for use by public health agencies.

But even with all these tools at our disposal, we have no centralized way of scanning the globe for new outbreaks. “Why isn’t there a National Weather Service for infectious disease?” asked James M. Wilson, the director of the Nevada Medical Intelligence Center. He was referring to the network of sensors throughout the world’s oceans that collect data on ocean surface temperature to strengthen predictions about weather and climate.

C. Jessica E. Metcalf, an assistant professor of ecology and evolutionary biology at Princeton University, shared Wilson’s concern about the lack of centralized health surveillance. Metcalf builds computational models to predict the spread of measles and other infectious diseases, but she is limited by a lack of information about people’s susceptibility to disease. Without knowing how many people have been vaccinated against measles, for example, she can’t predict its spread.

Metcalf thinks there is a wealth of information in serological blood assays—information about diseases to which people have been exposed and to which they are still susceptible. Serology could vastly improve prediction models that would ascertain where epidemics might strike. Just as people in the path of a hurricane protect themselves by evacuating the area, people in the path of an epidemic could get vaccinated.

This idea led Metcalf and several of her colleagues to propose building a global immunological observatory that would serve as a centralized repository of information gathered from blood samples around the world. “Our blood is this unbelievable sensor of all of the things we have been infected by . . . and an incredible window into the future and the likely burden of infections,” she said, admitting that many logistical and ethical challenges remain to be ironed out. But she is optimistic that it will be feasible in the future, through the use of blood from blood banking centers or even through future technology to test saliva samples in national census surveys.

Bodily fluids are not the only source of data being used to head off impending epidemics. Genomic data, increasingly cheaper and faster to obtain, can glean information about the DNA of pathogens. Cell phone data, also widely available, can be used to follow the flow of people (and pathogens) through populations. Traditional data that can be captured in standard public health records—such as on-the-ground epidemiological reporting—is as useful as ever when combined with new modeling techniques.

During the symposium’s final panel of the day, the conversation turned from the biological causes of mortality to those with social roots, such as the opioid epidemic and gun violence. Looking at these problems through the lens of contagion, researchers can identify risk factors in vulnerable populations and stage interventions similar to those used to fight infectious diseases.

In the case of neighborhood gun violence, which accounts for the majority of gun deaths in the United States and disproportionately affects young men of color living in inner cities, researchers can use network science—an analytical tool for studying social connections among populations—to predict how violence may spread through a community.

Andrew V. Papachristos, then a professor in the Department of Sociology at Yale University, presented a body of work that models the high-risk networks in the inner cities of Chicago and Boston. In one high-crime area in Boston, for example, he found that in a network of roughly 700 people deemed to be high risk, 85 percent of all gunshot wounds occurred in only 6 percent of the population. The probability of getting shot was directly related to how many people in one’s inner circle had already been victims—meaning the closer a person was to a gunshot victim, the more likely the person was to be a victim as well. Papachristos also found that the time between gun deaths was predictable—information that could help inform a focused intervention to prevent future attacks.

Papachristos hopes that by modeling how violence spreads like a flu epidemic, authorities can stage interventions more effectively. “We model gun violence like an airborne pathogen, tracking how rates go from one high-crime neighborhood to the next,” he said. He wants to use this information to intervene with community members between bouts of violence. “You catch a bullet like you catch a cold,” he said. Putting gun violence into a public-health framework could help steer interventions that are local, open, and responsive without increasing the number of arrests.

Whether tackling violence or virulence, public health encompasses a vast number of challenges as it enters a new era. These challenges highlight the need for interventions that are local but rooted in collaboration and that take advantage of the latest tools and technologies.

Janet Rich-Edwards, a faculty codirector of the science program at Radcliffe and an associate professor at Harvard Medical School and the T.H. Chan School of Public Health, issued a call to action: “We need to align our academic, government, and industry incentives to do the right thing and demand more from our institutions and our governments,” she said. “We increasingly have the power to combat networks of disease with networks of information, knowledge, communication, collaboration, and shared resources.”

Monique Brouillette is a freelance writer covering science and health.