A timely Radcliffe Institute panel discussion gave attendees a chance to consider the role of women athletes and fans in the still male-dominated realm of professional and college sports. 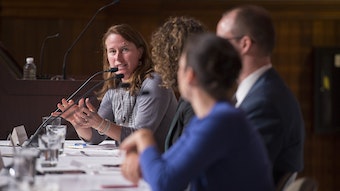 A timely Radcliffe Institute panel discussion held last fall during the Harvard Alumni Association Women’s Weekend gave attendees a chance to consider the role of women athletes and fans in the still male-dominated realm of professional and college sports. Dean Lizabeth Cohen introduced “Hits and Misses: Sports Marketing, Gender, and Society” by noting that despite numerous gains by women athletes over the past few decades, they “continue to face disparities in pay, endorsement deals, and media coverage.”

The moderator, Janet Rich-Edwards ’84, SD ’95, faculty codirector of the Institute’s science program, introduced the panelists. Drawing on his experience as a former ESPN Boston.com writer and editor, Daniel Peterson ’02 suggested that when it comes to winning recognition, respect, and financial rewards in sports, women’s strength can also be a weakness. “There’s a disparity in how we look at athletes’ physical prowess,” he observed. “While we celebrate male athletes’ bodies for their incredible function, female bodies are still judged on attractiveness and sex appeal.”

By coincidence, the long-planned event was held the same day that Harvard announced its men’s soccer season had been canceled after disclosure of the team’s “scouting report” ranking the physical attractiveness of Harvard’s women soccer players. “How sad is it that the focus of the New York Times coverage of Harvard women’s soccer is that they are defending themselves against a juvenile, sexist attack,” Peterson lamented. “We owe them more than that.”

Peterson, a resident scholar in journalism at Harvard’s Lowell House, noted that not even elite female athletes are immune from discrimination based on their appearance. The tennis stars Maria Sharapova and Serena Williams, the only two women on the Forbes list of the 100 highest paid sports figures, “have faced criticism and dismissive attitudes that men in their position haven’t had to deal with,” he observed. “Serena because of her race and body type,” and Sharapova recognized only for her clothing and appearance until her numerous victories in grand slam tourneys forced the issue.

Shira Springer ’97, a columnist on women’s sports at the Boston Globe and a sports and society reporter for NPR, spoke about “the built-in bias against women’s team sports” in newspapers crowded with coverage of men’s professional and college hockey, football, basketball, and baseball. “When you’re dealing with women and sports and marketing, you constantly have to prove that there’s an audience out there,” she said.

Sometimes, Springer added, that requires “coming around from the outside.” Rejected by Globe sports editors, two of her early articles on women’s team sports ran instead in the Sunday magazine section, where they were widely read and generated an extraordinary number of comments and clicks. Noting that the Globe sports editors were male and the magazine editors were women, Springer observed, “When it comes to content, women in the decision-making process make a huge difference. They see underserved markets where we can make a big impact.”

In her work as a data analyst and marketing strategist, the panelist Jessica C. Gelman ’97, MBA ’02 has been looking at one of those underserved markets: female fans of predominately male sports. As CEO of KAGR (Kraft Analytics Group), Gelman has helped the New England Patriots NFL franchise reinvent its approach to women.

“As we started looking at our customers’ clicks, e-mails, ticket buying, and online purchases, we began to get a better idea about who we were and weren’t serving,” Gelman said. Data and focus groups indicated that many women—and a surprising number of men—“didn’t really care if the team had played a nickel defense or a zone defense,” but were instead interested in players’ lives and personalities. This research led to the launch of “Patriots Lifestyle,” offering online coverage of content such as players’ off-field activities. Gelman said that a new shopping venue at the team’s stadium featuring merchandise for women and children has tripled the sales of a pro shop previously in that location. “We are being more welcoming to all our fans, and it has had a positive effect.”