The best science doesn’t always unfold as expected. At a recent Radcliffe symposium, scientists shared their unforeseen paths to discovery. 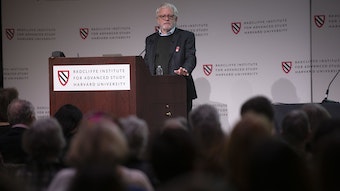 How are scientific discoveries made? We learn about the scientific method as an orderly process, starting with a hypothesis and ending with a result proving it correct (or not). But ask any scientist and you’ll find that science is far messier—and more exciting.

For its 2018 science symposium, the Radcliffe Institute explored how discoveries are actually made. “Science is not solved, it’s not boring, it’s not dry, and most of it is undiscovered,” said Alyssa A. Goodman AM ’86, PhD ’89, RI ’17, a faculty codirector of the Institute’s science program and the Robert Wheeler Willson Professor of Applied Astronomy at Harvard. “The Undiscovered,” held in October in the newly renovated Knafel Center, let scientists from diverse disciplines share the lucky breaks, fresh observations, and intractable puzzles that make the pursuit of science worthwhile.

Moving Away from the Formula

An underlying theme of the event was education: A poster session explored ways to bring the real excitement of the scientific process into schools. And the talks began with the Barnstable High School senior Ceili Magnus, who garnered a standing ovation for the eloquent reading of her poem critiquing typical science education: “The questions that need to be asked can’t come from a formula,” she said. (Read the poem below.)

In his morning keynote, Stuart Firestein made a passionate case that ignorance, doubt, uncertainty, and failure are not the opposite of success but an integral part of it. Science follows a winding path, said Firestein, a professor of biological sciences at Columbia University and the author of Ignorance: How It Drives Science (Oxford University Press, 2012). He called the scientific method “a very wrong idea, because there’s nothing particularly methodical or recipe-like about doing science.”

Scientists don’t begin with a correct answer; they follow mysteries. From Benjamin Franklin to James Maxwell to Marie Curie, scientists and other thinkers have praised the unknown. “Ignorance grows with knowledge,” Firestein said. “The more you know, the more you know what you don’t know.” The point of knowledge is not to get rid of ignorance, he said, but “to pose a better question, a more sophisticated question, a deeper question.”

Scientific discoveries often arise when observations challenge preconceived hypotheses. Robinson (Wally) W. Fulweiler, an associate professor of earth and environment and biology at Boston University, recounted a surprising discovery she made while painstakingly studying plastic bottles of muck collected from the floor of Narragansett Bay, in Rhode Island: a new pattern in the way microbes in ocean sediments process human-caused nitrogen pollution. At talks, other scientists admitted that they had ignored similar patterns because they challenged the working paradigm in the field. “I want to ban ‘working paradigm’ from science,” Fulweiler said.

She urged other budding scientists to follow evidence no matter where it takes them. “It was this tiny plastic bottle that changed my life,” she said. “It’s super nerdy, I know. But embrace that nerd, because we need you.”

Working in a totally different field, medicine, Joel T. Dudley has also allowed data to steer his research in directions that challenge paradigms. Dudley, director of the Next Generation Healthcare Institute at the Icahn School of Medicine at Mount Sinai Medical Center, uses large health-related databases—including genetics, lab test results, and medical records—to categorize diseases in new ways. The approach has shown that type 2 diabetes may actually represent three distinct conditions, and that Alzheimer’s disease may be linked to common viruses in the brain.

In some cases, science itself is clear but society’s responses to it are unpredictable. The most recent report from the Intergovernmental Panel on Climate Change finds overwhelming evidence that humans must make radical changes to stave off catastrophic global warming—“nothing less than a complete shutdown of the fossil fuel system over the next 30 years,” said Nathan E. Hultman, director of the Center for Global Sustainability at the University of Maryland School of Public Policy. Such a transition may seem impossible, but Hultman pointed out that we’re often wrong about how quickly people can change. “When we think about what’s possible, we often think about drawing extrapolations from where we are today,” he said. “We can choose our future.”

The afternoon turned to the ultimate undiscovered territory: space.

Humans have speculated about alien life on distant worlds for hundreds of years, but now it may be possible to actually find it. “Within the next 10 years, we might detect the presence of life on planets orbiting other stars,” said David Charbonneau AM ’99, PhD ’01, a professor of astronomy at Harvard.

Exoplanets—planets outside our solar system—were long deemed too challenging to detect with certainty. But Charbonneau’s finding in 2000 that an exoplanet could be observed as it passed in front of, or transited, its star “was the push that everybody needed,” said Laura Kreidberg, a junior fellow at the Harvard Society of Fellows. After that, she said, “the floodgates opened.”

Close to 4,000 planets orbiting other stars have now been confirmed, with a greater diversity than we could ever have imagined. Even more exciting, “10 to 20 percent of stars host an Earth-sized planet with temperatures appropriate for liquid water on the surface,” Kreidberg said. But she called the search for life on exoplanets “a calculated gamble,” becasue we have no idea which ones might harbor it.

How would we know whether a distant planet harbors life? One telltale sign, said Lisa Kaltenegger, director of the Carl Sagan Institute at Cornell University, is the chemical composition of its atmosphere. “What’s missing in the light that gets to the telescope—that will tell us about the chemical composition of these other worlds,” she said; this spectral fingerprint could reveal levels of gases such as oxygen and methane that indicate a planet teeming with life. But would life in such different worlds have the same chemical signatures as in our own? “As a first step, we can use Earth as a Rosetta stone,” she said, but we also need to look at extreme forms of life on earth that might suggest vastly different ways of living.

A Devotion to the Search

The afternoon keynote speaker, Jill Tarter, who cofounded the SETI Institute in 1984, embodies a commitment to the undiscovered. The inspiration for Carl Sagan’s novel Contact (Simon & Schuster, 1985) and its movie adaptation, Tarter spent decades searching for alien life before exoplanets were observed.

She explained that rather than search for atmospheric signs of life, SETI looks for “technosignatures” of advanced civilizations detectable over long distances of space. Because we see only snapshots in time of other planets, “if we have a success, then we know that on average technological civilizations are long-lived,” Tarter said, which may be reassuring about the longevity of our own.

Devoting a career to such an improbable search requires a fascination with questions rather than answers. Tarter pointed to new telescopes and technologies that are improving our ability to search the skies. When Kaltenegger asked about her motivation, she said, “I get out of bed in the morning not thinking ‘Today’s the day I’m going to get a signal,’ because that’s bound to have a bad result. [I] get out of bed thinking, ‘I’m going to make the search better.’”

Courtney Humphries is a freelance writer whose articles have appeared in the Boston Globe, Harvard Magazine, and other publications.

People have drawn a thick line between art and science,
But what is science without the arts?
The questions that need to be asked can’t come from a formula
When for centuries they’ve been deeply rooted in hearts
Of geniuses and prophets
With brains full of thought
It seems that over time humanity forgot
How to think critically
And to question with care.
In an age of internet access
The answers are always right there.
Schools are so focused on students
Having all the right answers
That they forget that we’re poets,
And designers, and dancers.
They drop facts on young minds
Like piles of heavy bricks,
And expect us to absorb information
Stacked miles thick.
They teach us so much
But now we need to build from it.
They marched with us to base camp,
But our goals are at the summit.
Applying what we know to explore
The unforeseen, the undiscovered,
Is easier said than done when
Curiosities lie dormant and smothered.
Every day I see young minds
Afraid to ask questions.
It cripples the scientific world
At its very foundation.
Research never comes
Without curiosity, without a spark,
And my spark would have died, too,
But I found my light in the dark.
My creativity led me
To ask all the right things.
Now I stand here before you to ask:
“When will you change the tune that you sing?
What will it take for schools
To open their eyes
To a world of unmatched opportunity
That very clearly lies
In the minds of young people
Who still have their fire?
When will you take their thoughts
And lift them up higher?”
Maybe you will be
The one to inspire
Someone’s great questions,
Someone’s desire.
Teach young minds
To fall in love with the unknown.
For every question we ask,
There are many more to go.
Nurture the creativity
We all harbor in our hearts,
And maybe we’ll give way
For a new way of thinking to start.