Hala Zreiqat RI '17 pictures a not-too-distant future in which a patient with a bad fracture—instead of being fitted with metal plates and screws—would receive a custom-made, 3D-printed implant. 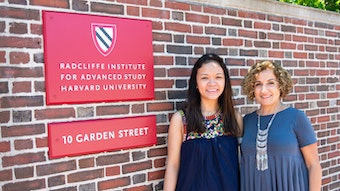 One morning in 2012, the biologist and medical engineer Hala Zreiqat arrived at her University of Sydney office at 7 AM, as was her habit. It had been four weeks since a veterinary orthopedist had surgically implanted a tiny scaffold in a rabbit’s forelimb. Developed by Zreiqat’s research team, the implant looked like a rough-surfaced twig of white coral. It was intended to help mend a break too severe to heal on its own.

Earlier, Zreiqat (pronounced “zree-kat”) had been thrilled to see that human bone cells in petri dishes thrived on the ceramic-based material. She didn’t have funding for an animal study, but she had to see how the material—intended to foster bone growth and break down harmlessly as the body’s own bone replaced it—would react in a living system. Using precious research funds, she sent off samples to a veterinary facility in southern Australia. “I was very anxious to see the results,” she recalled.

That morning, coffee in hand, she clicked on an e-mail with the subject line “This should put a smile on your face.” The attached X-rays showed something remarkable: a gaping defect in the rabbit’s ulna—once a gray shadow on the X-ray—had completely closed, replaced by new white bone.

Zreiqat, a professor of biomedical engineering, the founder and head of the University of Sydney’s Biomaterials and Tissue Engineering Research Unit, and a 2016–2017 Radcliffe fellow, was first drawn to medical research in her native Jordan during her 20s. She now hopes to provide better treatment options for the millions of people worldwide who suffer bone loss owing to injury, infection, disease, or abnormal skeletal development. “There is a huge critical unmet need,” she says, for substitute bone that can seamlessly incorporate itself into the body.

Zreiqat pictures a not-too-distant future in which a patient with a bad fracture or bone defect—instead of being fitted with metal plates and screws—would receive a surgically implanted scaffold made from a single piece or pieces akin to bone Legos, custom-made by a 3D printer according to data from an MRI, to perfectly fill and mend the defect.

Bone is porous, like a stiff sponge, yet surprisingly strong. Its most basic building block—a corkscrew-shaped protein called collagen—is embedded with nanoparticles of mineral. (Another mineralized biological material is mother of pearl, its strength yet to be replicated by a human-made substance.) Bone’s complex structure can propagate shock waves in such a way as to neutralize them.

Zreiqat and her colleagues set out to create an artificial material with bone’s porosity and strength that’s also biologically compatible with living cells. “You can have a material that has brilliant mechanical properties, but if it doesn’t do what you want it to do with cells in the body, what’s the point?” she says.

First, Zreiqat and her team perfected a way to generate a porous core of a novel multicomponent ceramic from a 3D printer. This ceramic composition is infused with trace elements important in bone formation, such as calcium, silicon, strontium, and zinc. It took a year to fine-tune the trace elements—too much of them provoked inflammation; too little failed to promote bone growth.

“The bone substitute my team and I developed is similar in structure and composition to actual bone; mimics the way real bone withstands loads and deflects impacts; and, like real bone, contains pores that allow blood and nutrients to penetrate it,” Zreiqat says in mildly accented English that evokes her Middle Eastern roots.

“The fact that our material actually kick-starts bone regeneration makes it far superior to other available materials,” she says. “Each patient has only a limited amount of bone available for grafting, so the demand for synthetic bone substitutes is high.” Zreiqat holds one patent and has six more in the works. The ceramic is a candidate for spinal fusion surgery that bridges damaged vertebrae, and her team is also exploring materials for substitute tendons and cartilage.

Soon after Zreiqat was born, in Amman, her father’s career took the family 45 miles east to Bethlehem, where she and her brother grew up attending German and French schools. Zreiqat recalls spending lunch breaks mingling with tourists and pilgrims in the ornate grotto of Church of the Nativity, Jesus’s birthplace.

“You’d see troops, but you grew up with that,” she says. Military checkpoints were—and are—a fact of life on the West Bank. When Zreiqat, her parents, and her brother visited Jewish family friends in Jerusalem, Israeli security forces would comb their public bus. It amused Zreiqat that they ignored her blond, blue-eyed father because he did not look Arabic. “I would not change it for the world,” Zreiqat said of her childhood in Palestine. “That made me who I am.”

When Zreiqat finished high school, at 16, her family returned to Jordan, where she found the culture was restrictive compared to how she was raised in occupied Palestine. When her father set out for an early-morning run wearing shorts, the police shadowed him. One couldn’t bike freely on the streets, and women were subject to male harassment, Zreiqat recalls. Access to beaches and swimming pools was limited to those who could afford exclusive hotels and country clubs. Her homeland had become a source of culture shock.

Her father’s lifetime career as an accountant for the Jordanian Armed Forces made her eligible for a scholarship and a coveted slot at the University of Jordan. As long as she could remember, she’d wanted to be an interior designer. She loved the elegance and beauty of fine furnishings and exquisite antiques. But the University of Jordan didn’t then offer a program in interior design, and she understood that it wasn’t practical for her parents to send her to study the subject in the UK.

“You had to be realistic,” she said. “So the next option was medical sciences. Science is a bit of art, I think.”

For much of the 1980s, after graduating with a degree in biology, Zreiqat dressed in the regulation forest-green Jordanian Armed Forces uniform as a first lieutenant in the prestigious King Hussein Medical Centre, where she was working as a scientific officer to pay off a commission tied to the army scholarship. Eventually heading up a cardiac diagnostic lab there, she decided she wanted to pursue her own medical research—a path not readily available to her in Amman.

I can’t stay here, she told her parents. Her father sold property to pay off her army commission, and she moved to Australia, where two of her uncles lived.

Knocking on a random office door at the University of New South Wales Medical School led her, indirectly, to a mentor—Rolfe Howlett, a professor and pathologist who studied skeletal disease. Under Howlett, Zreiqat focused her PhD thesis on making the titanium alloy widely used in hip replacements more biologically compatible by bombarding it with magnesium and zinc ions. As she waited impatiently for a physicist to provide the modified titanium materials, she vowed that her own future laboratory would include a range of specialists under one roof.

On a personal level, Zreiqat found Australia freeing. “Anybody can go anywhere!” she says, still delighted with her adopted country two decades later. “One of the reasons I left the Middle East is because I don’t like to live in a place with restrictions. I am the kind of person who likes to see five years ahead, and I couldn’t see that in the Middle East.” She pauses, looking at me meaningfully, her dark eyes framed by a mass of curls. “And I wasn’t wrong, was I?”

In 2006, the University of Sydney, the oldest university in Australia, not far from the harbor and the iconic opera house, asked Zreiqat to establish its first tissue-engineering lab. True to her vow, she assembled a team of engineers, cell and molecular biologists, and material scientists. She built an international network of scientists, clinicians, and engineers to facilitate collaborations in the US, Europe, China, and Australia. “I’m always one who wanted everything done yesterday,” she says. “It stems from perhaps selfish thinking. But it was what we needed to do to get the field to where it is today.”

Zreiqat’s work has progressed steadily since the rabbit study. Now funded by a $1.6 million grant, she has completed a study on sheep, a precursor to clinical trials in humans. Preliminary results show that the implant is stable, strong, and nontoxic and encourages new bone growth. Zreiqat is working on determining how long the material takes to degrade and exactly how the degradation occurs.

“A once-in-a-lifetime opportunity,” she says of the Radcliffe fellowship. The multidisciplinary focus of the program meshes perfectly with Zreiqat’s longtime goal of immersing herself in a far-ranging intellectual community where no idea is too far-fetched. She seeks out experts in fields such as health economics in the hope of better understanding how to fund her inventions. She plans to tour Harvard’s cross-disciplinary Wyss Institute for Biologically Inspired Engineering, which develops bio-inspired materials and devices for health care, manufacturing, robotics, energy, and sustainable architecture. She hopes to emulate in Sydney a Harvard educational model that cross-pollinates ideas among architects, scientists, medical experts, and engineers in the hope of generating novel solutions to problems such as cleaning polluted oceans in the same way that kidneys clean the blood.

“This is the way of the future; Harvard started it two years ago,” she says of the program. “Why shouldn’t I be able to start it in Sydney? I should be able to, and I will.” Her resolve is infectious; she makes every ambition seem within reach.

In her bare-walled office in Byerly Hall, furnished with only utilitarian, standard-issue aluminum desks and a single upholstered chair, Zreiqat muses that she might one day revisit her old passion for interior design. “If time allows, and I have all the money in the world, I would probably do that,” she says. Meanwhile, in her minimal free time between meetings and flying back to Australia to teach classes, she’s pursuing her latest interest: ballroom and Latin dancing. Zreiqat claims she can’t fathom where these infatuations originated. She only knows she’s compelled to pursue them with almost the same fervor that she brings to medical research.

“I’m very lucky,” Zreiqat says about earning a competitive grant soon after completing her PhD, about the accomplished students in her classes, about having unfettered access to the University of Sydney’s medical institutes, even about her proximity to Sydney’s spectacular beaches. But most of what she describes as luck stems from a razor-sharp intellect, a huge dose of determination, and a relentless work ethic.

Our meeting over, Zreiqat insists on walking me out of Byerly Hall, even though it’s a chilly spring day, not like temperate Sydney or subtropical Amman, and she isn’t wearing a coat. “Oh,” she says, wrapping her arms around herself as frigid air hits us like a wall. “It’s so cold!” A second later, her face brightens. “But it’s a beautiful sunny day,” she declares, rushing down the granite walk and back to her office. Zreiqat would say she’s just lucky that way.

Deborah Halber, a freelance journalist, is the author of The Skeleton Crew: How Amateur Sleuths Are Solving America’s Coldest Cases (Simon & Schuster, 2014).