Race is often at the forefront of American conversation. It has lately emerged with new urgency around discussions of policing, immigration, First Amendment rights, and even professional football. And yet even as we are confronted with dramatic examples of ongoing racial tensions, most white Americans remain convinced that race is no longer central to one’s opportunities in life. Polling data shows that many believe these lingering conflicts represent the actions of a few bad apples and aren’t in sync with the larger trend toward systemic racial equality.

Are these beliefs accurate? What do we know about long-term trends in racial discrimination?

Discrimination, given how it often manifests subtly, is notoriously difficult to measure in any context. And until recently we have not had much information that we could use to reliably assess changes in discrimination over time. However, in our recent study, published in the Proceedings of the National Academy of Sciences, we were able to analyze trends in discrimination by performing a meta-analysis from all available field experiments pertaining to one area: racial discrimination in hiring. We focused on experiments performed since 1990, when field studies became more numerous and their methodologically improved. We analyzed data from 24 field experiments, which included data from more than 54,000 applications across more than 25,000 positions.

We chose field experiments as a sample because they are widely regarded as the most valid method to assess discrimination. They generally come in two major types: Résumé audits, done through the mail or online, submit fictitious résumés with equivalent qualifications and ethnically identifiable names. And in-person audits — done with trained pairs of testers, white and nonwhite — have participants apply for jobs. By examining the rates of callbacks, or invitations to job interviews, for white and nonwhite applicants with equivalent qualifications, these studies provide high-quality measures of rates of discrimination in hiring.

When it comes to Latinos, we found some evidence of a decline in discrimination over the past 25 years. Because of the small number of field experiments including Latinos, however, statistical tests indicate the evidence of decline is inconclusive.

For black applicants we found no change in hiring rates over time. In the figure below, the dots represent results from 21 studies contrasting white and black applicants, based on a total of 42,708 applications for 20,990 positions. The line shows the overall trend. The line slants slightly upward, but it’s statistically indistinguishable from a flat line. 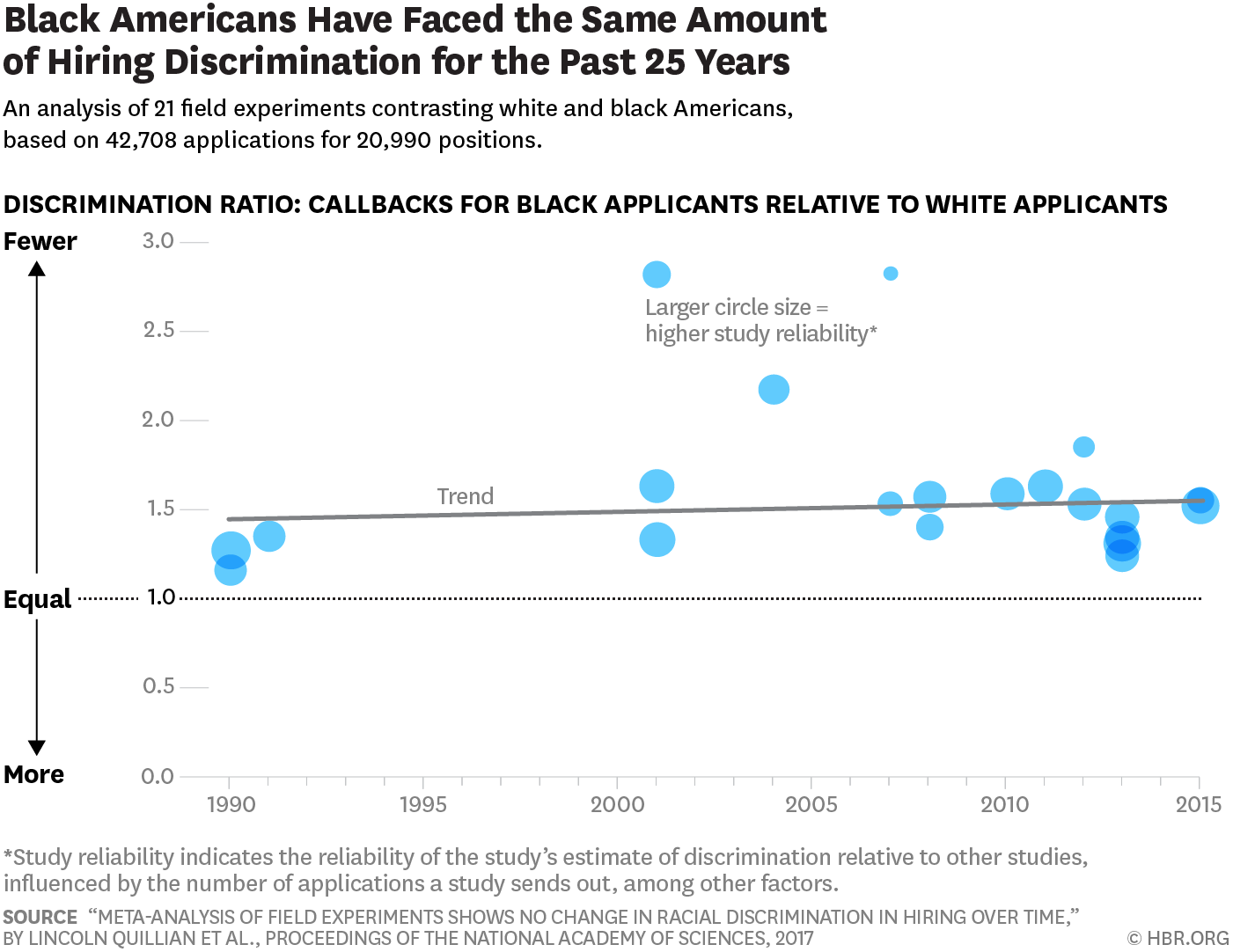 We wondered if this level of discrimination might be influenced by applicant education, applicant gender, study method, occupational groups, and local labor market conditions. When we controlled for these factors, we found that none account for the trend in discrimination. Under these and other adjustments, our results suggest that levels of discrimination against black job applicants hasn’t changed since 1990.

Our results do not address the possibility that hiring discrimination may have substantially dropped in the 1960s or early 1970s, during the civil rights era, when many forms of direct discrimination were outlawed. Further, our results pertain only to discrimination at the point of hire, not at later points in the employment relationship, such as wage setting or promotion decisions. It may be the case, then, that meaningful reductions in discrimination have taken place at other points in the employment relationship. What our results do point to is that at the initial point of entry — hiring decisions — blacks remain substantially disadvantaged relative to equally qualified whites, and we see little indication of progress over time.

What might account for the stubborn persistence of hiring discrimination? At first glance, our findings seem to contradict other trends. Attitude surveys indicate that overtly prejudicial beliefs have declined, and endorsement of the principles of equal treatment regardless of race has increased. Americans appear to have become more concerned with diversity and inclusion and, in a small number of elite firms, affirmative action practices have made meaningful changes in the opportunities available to racial minorities.

At the same time, however, assessments of subtles forms of racial stereotypes and measures of unconscious bias have shown little change over time. The vast majority of hiring is subject to very little oversight, and compensatory policies that address racial bias reach a very small fraction of hiring overall. Together, these trends offer little support for optimism about racial progress in the United States. While some people may assume that discrimination has declined over time, through increasing diversity in institutions along with other cultural changes, it seems as though, at least in terms of hiring, this expectation doesn’t meet with reality.

We believe that our results provide a strong rationale for affirmative action policies and point to the continuing need for the enforcement of antidiscrimination legislation. Even among well-intended employers, racial bias may lurk in hiring decisions. Whether conscious or not, bias continues to affect decision making, and we find little evidence that this pattern will diminish on its own. Instead, more active intervention may be needed to reduce discrimination at the point of hire.

Lincoln Quillian is Professor of Sociology and Faculty Fellow at the Institute for Policy Research at Northwestern University. His current research is involves the study of hiring discrimination through meta-analysis of field experiments and research to understand factors contributing to segregation on the basis of race and income.

Devah Pager is Professor of Sociology and Public Policy at Harvard University and the Susan S. and the Kenneth L. Wallach Professor at the Radcliffe Institute for Advanced Study. Her current research involves the use of field experiments to study hiring discrimination and to evaluate the consequences of legal debt.

Ole Hexel is a PhD student at Northwestern University and Sciences Po Paris. His dissertation examines the importance of family assets in the transmission of status across generations, through a comparison of inter vivos transfers in several western democracies.

Laurence Ralph has used his time as a Radcliffe fellow to study police violence and race. "I wanted to examine the contradiction between the fact that the police are supposed to safeguard citizens and yet they're contributing to an alarming number of violent deaths," he says.

Muhammad advocates that higher-education and local institutions ought to connect more, which will sustain public engagement by providing “the kind of civic literacy we need in order to have a healthier democracy."

From Prison to Poverty

"Just about everyone leaves prison and enters poverty," said Harvard sociologist and Radcliffe fellow Bruce Western, who recently completed a study tracking 122 incarcerated men and women who were released back into society.

The prize-winning Harvard sociologist and past Radcliffe Professor was a scholar, friend, and mentor of "warmth, optimism, curiosity, and inspiration.”

How Should the US Presidential Candidates Think about Criminal Justice Reform?