How Caffeine Changed the World

Photo by Rose Lincoln/Harvard Staff Photographer
Harvard Gazette
How caffeine changed the world
By Colleen Walsh, Harvard Staff Writer
It is the world’s most-used drug, one many of us simply refuse to live without, opting for addiction over the loss of that first, or second, or in some cases third cup that gets us through the day.

And now its seductive powers, its dark history, its health benefits, and its harmful side effects are on full display in best-selling author Michael Pollan’s new audible book “Caffeine: How Coffee and Tea Created the Modern World.”

The Lewis K. Chan Arts Lecturer and Professor of the Practice of Non-Fiction has made a career of writing about how the things we consume affect our lives, our health, and our planet (“The Omnivore’s Dilemma,” “How to Change your Mind: What the New Science of Psychedelics Teaches Us About Consciousness, Dying, Addiction, Depression, and Transcendence”). He discussed his latest effort with Radcliffe Institute for Advanced Study Dean Tomiko Brown-Nagin during a Tuesday Zoom talk.

Pollan, who worked on his psychedelics book while a Radcliffe fellow, said he has been obsessed with “this reciprocal relationship we have with plants” and with certain plants’ ability “to change the textures of our experiences of the world” for years. Crafting a piece on caffeine had long been on his to-do list, he said, but he was unaware it would require a precious sacrifice.

As he has done in his earlier work, Pollan became a human test subject for his art, giving up coffee, or more specifically, caffeine, while he worked on the new book in order to truly appreciate its effects on the human body and mind. He said his story’s narrative “demanded it.” Yet, as anyone who has dropped the stimulant from their diet knows, it wasn’t easy.

In his book Pollan recounts the day he finally decided to forgo his routine morning cup, recalling how the “lovely dispersal of the mental fog that the first hit of caffeine ushers into consciousness never arrived. The fog settled over me and would not budge.” 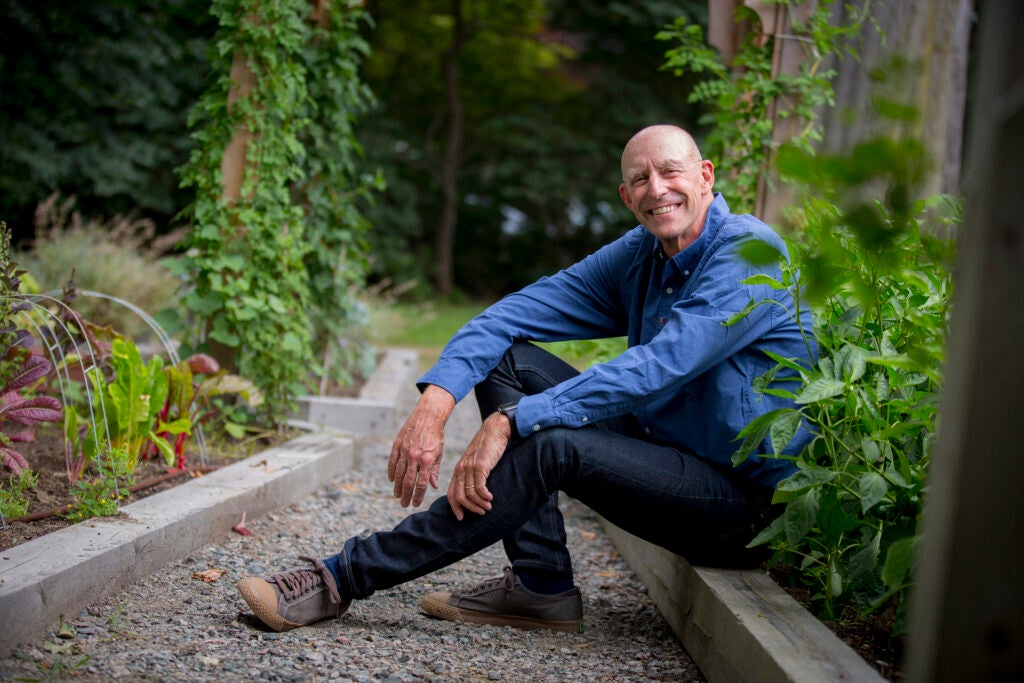 Michael Pollan, who gave up caffeine while writing his book, said he wasn't aware how addicted he was to the drug. Rose Lincoln/Harvard file photo

Pollan said he didn’t fully understand how addicted he was to the drug — also known by its scientific name: 1, 3, 7-trimethylxanthine — until he got off it. All the symptoms of caffeine withdrawal were there, he noted, including headaches, fatigue, and perhaps most insidious for a writer trying to tell a compelling story, difficulty concentrating.

As his work progressed, he also realized that because caffeine is so ubiquitous — more than 90 percent of people on the planet consume it daily, and we even regularly allow children to have the drug in the form of soda ­— constant personal caffeination “has simply become baseline human consciousness.”

During the talk Pollan delved into the science, discussing how the tiny caffeine molecule acts on the central nervous system by suppressing the neuromodulator adenosine that helps make us sleepy. Caffeine, one-quarter of which can stay in your system for up to 12 hours, then becomes the solution to the problem it creates, he said, making people who are sleep-deprived from their caffeine consumption the day before eager for a morning hit to charge them up for the day ahead.

Pollan explains in a section of the audible book on the substance’s origins that caffeine was first discovered in China around 1000 B.C. in the form of tea. The discovery of coffee is traced to Ethiopia around 850 A.D. According to the legend, a herder who noticed how jumpy his goats got after eating the berries of an arabica plant gave some of the berries to a local monk, who used them to concoct the world’s first cup of coffee. As time went on, caffeine’s history took a dark turn. Growers and sellers built the industry on the backs of enslaved people forced to harvest both the coffee beans and the sugar needed to sweeten the bitter drink that had become increasingly popular in the West.

In his work, Pollan addresses the question of whether caffeine has been a boon or bane to human civilization. He concludes that the price has been undeniably high, possibly too high, with its historical connections to a brutal system of production and the back-breaking work involved in growing and harvesting coffee that continues today. Then there is the havoc it wreaks on our sleep — particularly the deep, slow-wave sleep that is critical to memory.

But Pollan highlights the positives as well. He notes that before there were ready supplies of potable water, boiled beverages, like coffee or tea, “were the safest thing a person could drink,” with the most commonly available alternative being alcohol. He also points out the continuing health benefits attributed to caffeine and confirmed by the science. Taken in moderation, coffee and tea can decrease the risk of several cancers, as well cardiovascular disease, Type 2 diabetes, and Parkinson’s disease.

He also suggests that the consumption of caffeinated drinks even might have helped societies that embraced them to thrive. According to Pollan, caffeine drove a kind of “Enlightenment thinking.” The coffee houses that stretched first across the Arab world and eventually Europe became not only the internet of their day, spreading gossip and news, but also centers of discussion that fostered important cultural, political, and scientific exchanges and helped usher in a “new spirit of rationalism.”

And the mental edge provided by caffeine helped transform work, he said, by improving focus and the ability to concentrate ­­— keys to the safety and success of the machine-based labor that powered the Industrial Revolution as well as every generation since. Pollan calls the coffee break, created in the U.S. in the 1940s as a way to increase worker output, “the best evidence of caffeine’s gift to capitalism.”

“It’s amazing that we’ve institutionalized a drug for the express purpose of improving productivity and quality control, but so we have,” said Pollan.

In the end, where did Pollan finally land on his own caffeine intake? He made a compromise with himself, he said, only having coffee on Saturdays, or when he is in real need of that mental boost. He acknowledges it is “not an addiction that troubles me.”

The author also encouraged his listeners to try to kick their caffeine habit, if only temporarily, by tapering down slowly to avoid withdrawal symptoms. “The first cup after you’ve been off is the best way to reacquaint yourself with what a powerful drug it is,” said Pollan, who plans to include his work on caffeine in a print book featuring three psychoactive plants. It is tentatively titled “This Is Your Brain on Plants.”

And we just might have to get used to having less caffeine in our lives in the future. According to some estimates, said Pollan, because of climate change, by the middle of the century 50 percent of the land currently growing coffee plants will “no longer be suitable for coffee production.”

From Fresh Food to Magic Mushrooms

Radcliffe fellow Michael Pollan is exploring a budding rebirth of psychedelic drugs, all but banned since the 1960s. “This has been a different kind of reporting for me. Interviewing people with cancer diagnoses—who are thinking about death—and talking about death with them,” Pollan said.

Of the Bean I Sing

Venezuelan musician and composer Paul Desenne says coffee's rise in the world was operalike—full of conflict, tension, and romance. At Radcliffe, Desenne was hard at work on an opera about coffee﻿.

Where the Wild Things Are—Now That Humans Are Locked Down

A white stork with a solar GPS tag. Photo by Renate Herz (C)

Christian Rutz RI '20 and other researchers are examining human impact on wildlife using data collected during the pandemic quarantine.

We asked members of the 2020–2021 fellowship class to introduce themselves by way of a recent preoccupation. Their answers suggest minds rarely at rest, even in summer.