Where the Wild Things Are—Now That Humans Are Locked Down

A white stork with a solar GPS tag. Photo by Renate Herz (C)
Harvard Gazette
Where the wild things are — now that humans are locked down

As COVID-19 lockdowns forced billions indoors, wildlife came out to play in many parts of the world. Sightings have been reported of coyotes roaming through San Francisco, dolphins frolicking along Istanbul’s shores, and wild goats wandering the streets of a North Wales town.

And researchers have been watching. One group of experts recently coined the term “anthropause” to describe the global slowdown of human activity during the pandemic and noted the conditions could produce critical insights into human-wildlife interactions.

“Coordinated global wildlife research during the anthropause will make contributions that go well beyond informing conservation science — it will challenge humanity to reconsider our future on Earth,” wrote the team of researchers led by Christian Rutz, 2019–2020 Grass Fellow at the Radcliffe Institute for Advanced Study, in a recent article published in Nature Ecology & Evolution. The paper amounts to a call to study humankind’s impact on wildlife using data collected during the pandemic, and suggests such research could yield “opportunities to reinvent the way we live our lives, and to forge a mutually beneficial coexistence with other species.”

Rutz, a biology professor at the University of St. Andrews and a leading expert on animal tool behavior and crows, co-launched the global research initiative this spring during a Radcliffe fellowship. Shortly after returning to his home in Scotland in March (several months earlier than planned due to the pandemic) Rutz and several fellow biologists began discussing via email how they could take advantage of the pause in human movement to study its effects on avian, marine, and terrestrial wildlife. 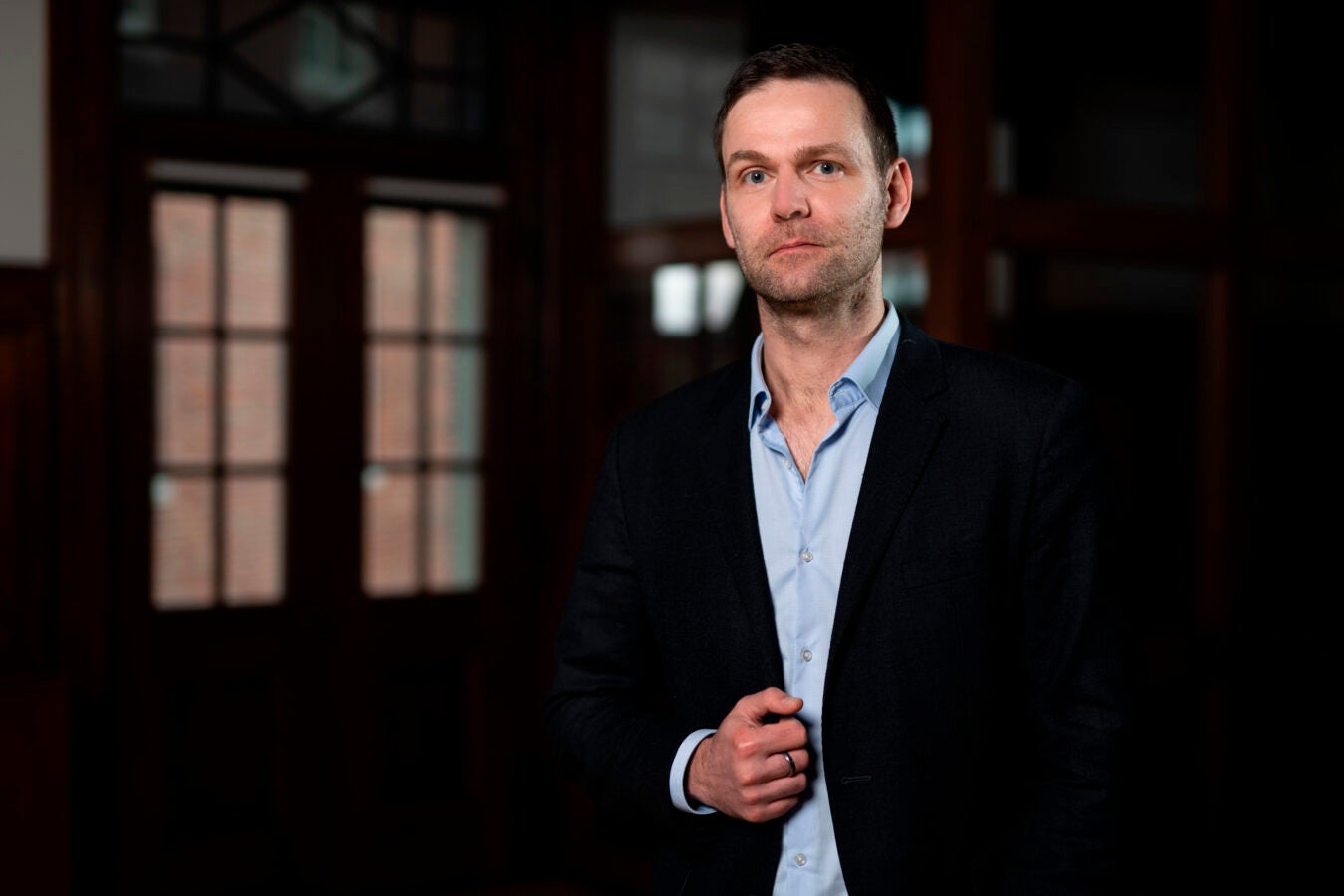 Christian Rutz said scientists have long studied human-wildlife interactions but have struggled to understand whether animals have been most affected by human infrastructure. Photo by Kevin Grady/Radcliffe Institute

As the president of the International Bio-Logging Society, a group of wildlife biologists from around the world who track animal movements and activity patterns using tiny attachable electronic tags (so-called “bio-loggers”), Rutz knew he and his colleagues had a unique chance to gather key data, so they made an appeal to the society’s roughly 1,000 international members.

“We went into lockdown, but all the while these little tracking devices kept recording data for a large number of animals,” he said. “We realized that there was an opportunity to use these tracking data from before, during, and after lockdown to gain unprecedented insights into human-wildlife interactions.”

In their article, Rutz’s team defined their plan, urged relevant authorities to allow scientists to continue their research during lockdown, and encouraged leaders of local animal tracking projects and owners of high-quality human mobility data to join their global collaboration.

Soon they had more than 300 responses from colleagues tracking everything from small garden birds to massive whales. “The last numbers I’ve seen indicate that we’ve been offered data for 180 species across 279 populations from all around the globe,” Rutz said. “This provides an opportunity to go beyond anecdotal observations and to look at broader patterns across species, ecosystems, and geographic regions.”

Images have flooded social media in recent weeks offering glimpses of how animals are responding to having fewer humans around. Dolphins have been seen swimming in Italy’s Gulf of Trieste; pumas on the streets of Santiago, Chile; and jackals in parks in Tel Aviv, Israel, in broad daylight. But other animals appear to be facing serious threats due to the lockdowns. According to reports, monkeys and seagulls that survive on scraps of human food in some parts of the world are going hungry, and the temporary shutdown of wildlife reserves has heightened the poaching threat to endangered animals such as rhinoceroses and elephants.

Rutz said scientists have long studied human-wildlife interactions but have struggled to understand whether animals have been most affected by human infrastructure, such as buildings and roads, the physical presence of humans in their midst, or a combination of both. The anthropause has given scientists the chance “to get precisely at that question because, for the most tragic reasons, humans were briefly taken out of the equation,” said Rutz.

The current closure of large parts of society has returned the world to levels of human mobility observed only a few decades ago, added Rutz, allowing researchers to study how even small shifts in human behavior might have a dramatic beneficial impact on species around the globe. 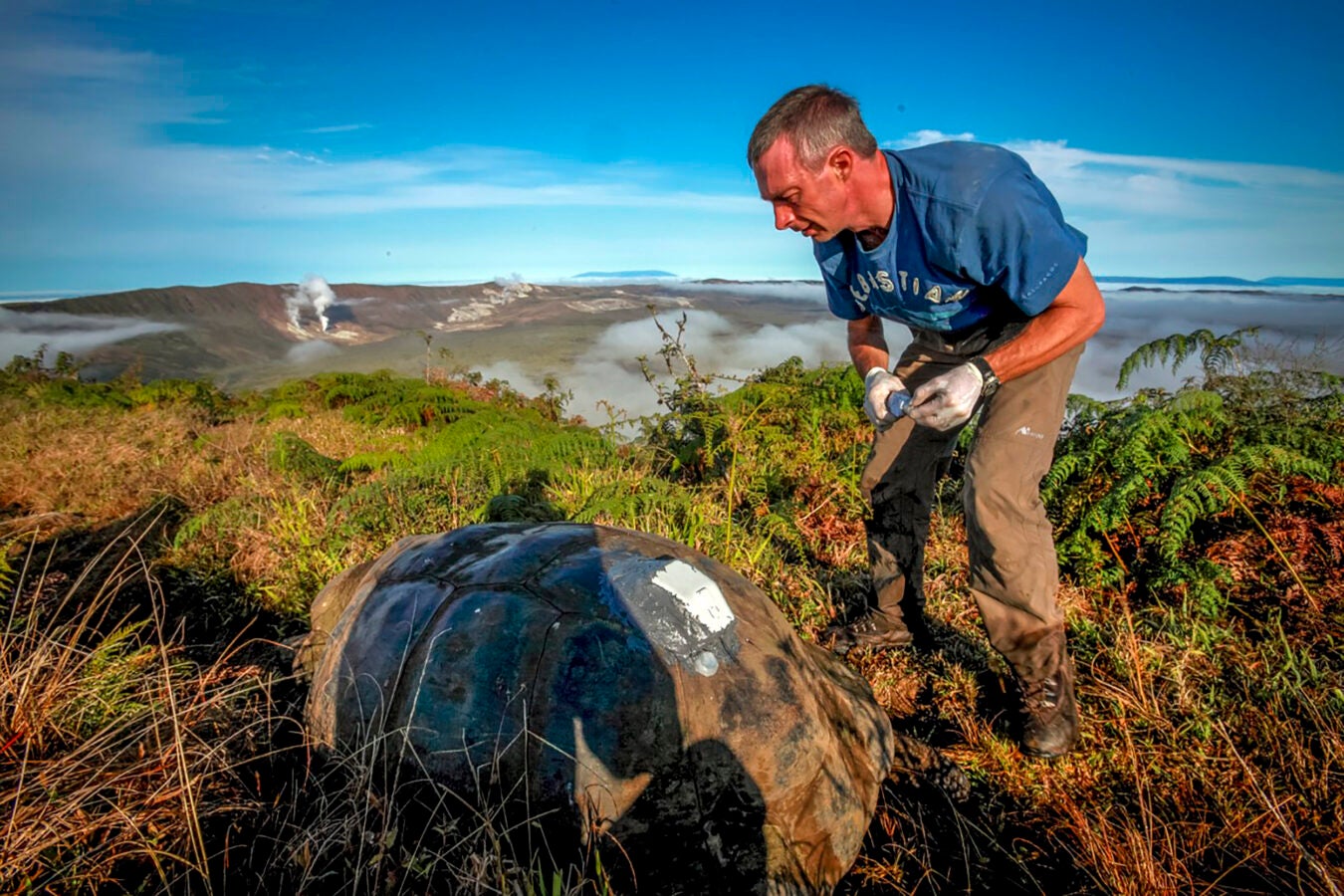 A Galapagos giant tortoise with a solar GPS tag. Tracking wildlife during the COVID-19 lockdown has given researchers new insights on animal movements. Photo by Christian Ziegler (C) 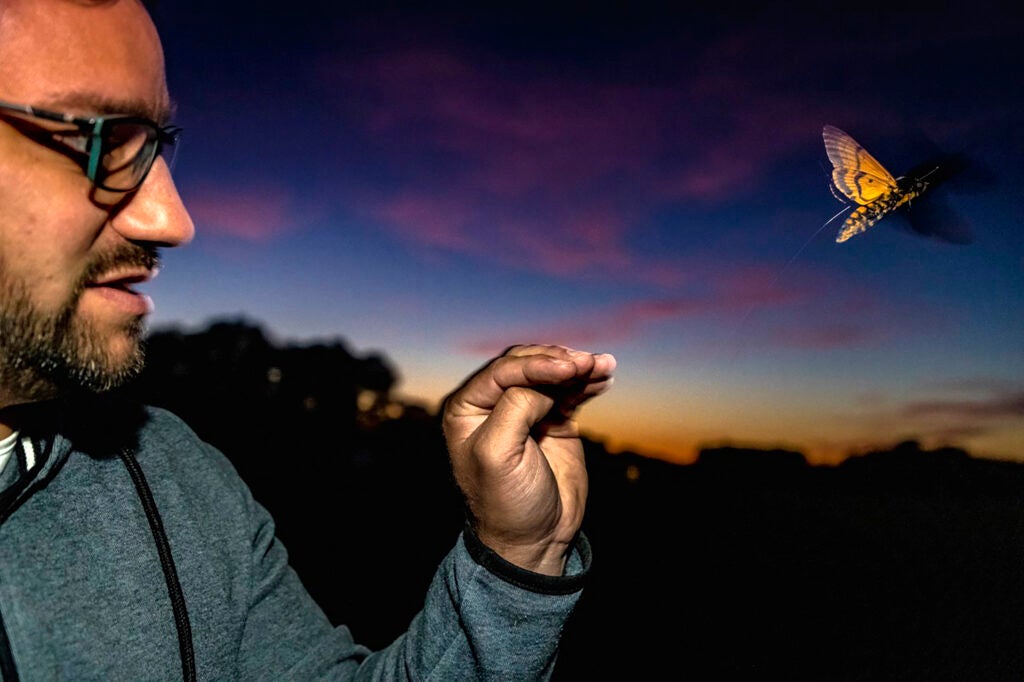 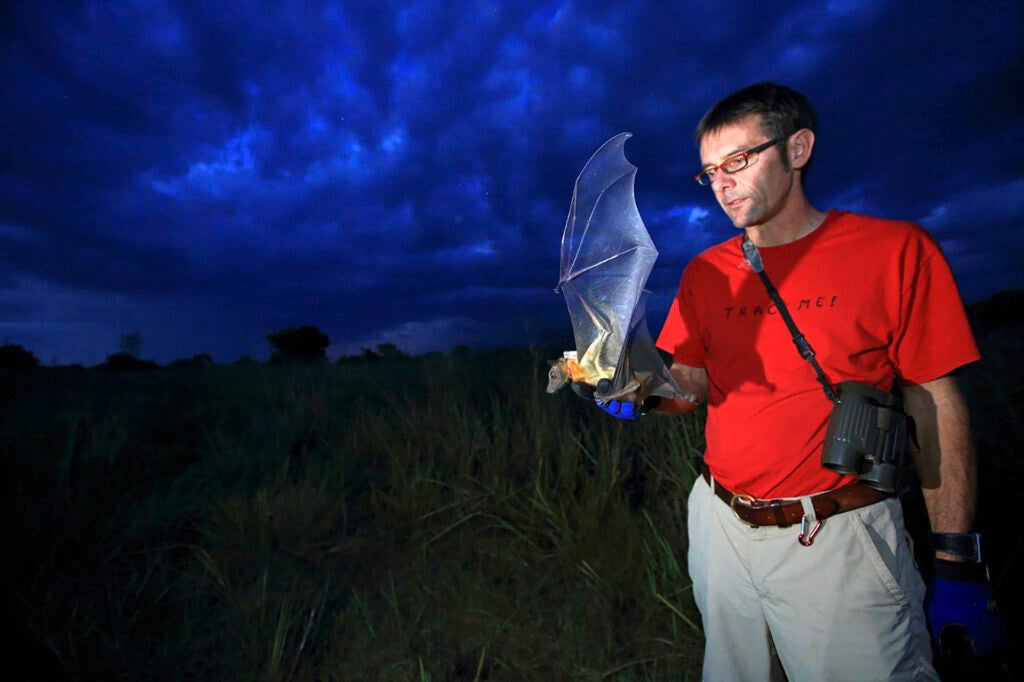 “Nobody is asking for humans to stay in a state of permanent lockdown,” said Rutz. “Humans will go about their lives. They will want to travel, and they should travel. But we anticipate that there will be opportunities to make relatively minor changes that have significant impact to, for example, how we lay out and operate our transport networks — roads on land and vessel routes at sea. If we find through our replicated analyses, across different species and regions, that a particular way of arranging traffic routes is really bad for animals, we can make concrete proposals for improvements.”

The research could also have dramatic implications for a world battling a deadly virus that likely originated in bats before spreading to people. Rutz thinks the project could help shed light on the transmission of viruses from animals to humans.

“I definitely think that the more we understand about the movements and activity patterns of wild animals, especially across species and habitats, the more informed models will be that describe the potential spread of diseases,” said Rutz. “Our project gets at the heart of what happens at that human wildlife interface, which is, of course, key to understanding how diseases may jump from animals to humans.”

Although the global impact of COVID-19 is unprecedented in modern times, the Chernobyl Nuclear Power Plant disaster and its effects on the surrounding wildlife hint at the kind of results Rutz and his team might find. For years, scientists studied wild animal populations from the exclusion zone, the approximately 1,600-square-mile area around the plant in northern Ukraine that was permanently evacuated of its more than 100,000 residents after one of the plant’s reactors melted down in April 1986. In a 2015 study, researchers reported finding an “an abundant mammal community after nearly three decades of chronic radiation exposures” and suggested that prior to the accident, “mammal population densities were likely depressed due to hunting, forestry and agriculture.”

“This is a research opportunity that has come about through the most tragic circumstances due to COVID-19,” said Rutz. “But we feel, as a research community, that it is an opportunity we cannot afford to miss. We will be able to learn some important lessons going forward, not just for wildlife conservation, but also for planning our own future on this increasingly crowded planet.”

Some Crows Are Birds, Others Are Artists

In New Caledonia, Christian Rutz found a match for his adventurous mind.

How Caffeine Changed the World

Teaching Children to Be Antiracist

Scholar Ibram X. Kendi, an incoming Radcliffe Institute fellow, talks about his new picture book and how to start conversations about racism with children.

The Radcliffe Institute hosted an online discussion with Mary T. Bassett and Khalil Gibran Muhammad about the disproportionate toll of COVID-19 on poorer Americans and communities of color.

The history of our present moment is taking shape in journals and drawings. “Diaries and correspondences are a gold standard,” says Jane Kamensky of the Schlesinger Library. “They’re among the best evidence we have of people’s inner worlds.”

In Prisons, a Looming Coronavirus Crisis

Historian Liette Gidlow RI '20 speaks on the tension between in-person voting and public health as American states scramble to adapt during the COVID-19 pandemic.

How to Build a Better World

Esra Akcan RI '20, a professor in Cornell's Department of Architecture, answers questions as part of a series on the wide-ranging effects of COVID-19.

The Fraught Promise of Digital Remedies

As the COVID-19 pandemic has thrust many of our activities into cyberspace, Fran Berman RI ’20 discusses the need for comprehensive privacy protections, better security standards, and a national discussion about when surveillance is acceptable.

They're Used to Tapping. Now They're Talking.

In Ayodele Casel's video series, "Diary of a Tap Dancer, v. 6: Us," performers talk about what's on their minds—and dance a little too.

We asked members of the 2020–2021 fellowship class to introduce themselves by way of a recent preoccupation. Their answers suggest minds rarely at rest, even in summer.