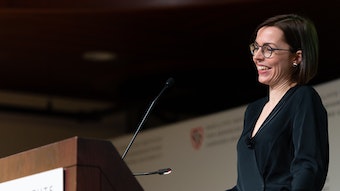 Play video
Birth and the Nation: A Fictional History of Immigration

Stephanie DeGooyer is an assistant professor of English at Willamette University. Her research focuses on intersections between transatlantic literature, law, and political philosophy, especially with regards to citizenship and immigration.

At the Radcliffe Institute, DeGooyer is completing “Acts of Naturalization: Immigration and the Early Transnational Novel,” a book that investigates naturalization as a legal and literary form and explains its significance for negotiating the settlement of foreigners and refugees in Europe and its colonies in the early 18th century. Arguing that naturalization is an aesthetic act that both facilitates and complicates political personhood, this project advances the 18th century as a progressive place from which to rethink immigration criteria today.

DeGooyer earned her PhD in English literature from Cornell University. Her research has been supported by grants and fellowships from the Andrew W. Mellon Foundation, the Center for Religion, Law and Democracy, and the William Andrews Clark Memorial Library. With Alastair Hunt, Lida Maxwell, and Samuel Moyn, she coauthored The Right to Have Rights (Verso Books, 2018). She has published or has forthcoming articles in ELH, Humanity, and The Cambridge Companion to the Eighteenth-Century Novel (Cambridge University Press, forthcoming). From 2010 to 2013, DeGooyer was codirector of Moonlighter Presents, a lecture series based in Brooklyn, New York. She writes about literature, politics, and gender for venues such as frieze, the Los Angeles Review of Books, and Public Books.