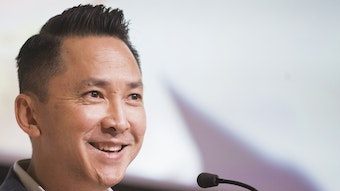 Viet Thanh Nguyen is an associate professor of English and American studies and ethnicity at the University of Southern California. His current research is a comparative study of how Vietnamese and Americans have remembered and represented the American war in Viet Nam, particularly through the arts. He is also at work on a collection of short fiction.

While at Radcliffe, Nguyen will delve more deeply into the various places where memories of the war are fashioned, including novels, memoirs, films, photographs, memorials, monuments, and museums. His book shows how nationalist practices of commemoration in all these places regulate both gender and empathy by privileging the experiences of men. In addition to looking at nationalist works, he examines the literary and visual work of many antinationalist writers and artists from the United States and Viet Nam, who in different ways articulate an ethics of empathy that challenges audiences to remember the dead of both sides.

Nguyen is the author of Race and Resistance: Literature and Politics in Asian America (Oxford University Press, 2002). He has also published numerous academic articles in books and journals including American Literary History, PMLA, and positions: east asia cultures critique. His short fiction has been published in a variety of venues, including Best New American Voices 2007, Gulf Coast, and Narrative Magazine. He has received fellowships from the Andrew W. Mellon Foundation and the Huntington Library and has held residencies at the Fine Arts Work Center in Provincetown and the Djerassi Resident Artists Program.