Naked Body Language—Dance Is Time and Gesture Is Meaningless 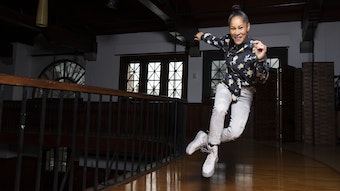 Play video
Diary of a Tap Dancer Beyond Words: Gender and the Aesthetics of Communication Karole Armitage

Through dialogue, video, dance, and discussion, Karole Armitage RI '16 will explore how meaning is made in dance without words, plot, or story to explore material from theoretical physics to a personal search for meaning.

Karole Armitage is the Artistic Director of the New York-based Armitage Gone! Dance Company, founded in 2004. She was rigorously trained in classical ballet and began her professional career as a member of the Ballet du Grand Théâtre de Genève, Switzerland (1973–1975), a company devoted exclusively to the repertory of George Balanchine. In 1976, she was invited to join Merce Cunningham's company, where she remained for five years, performing leading roles in Cunningham's landmark works. Through her unique and acute knowledge of the aesthetic values of Balanchine and Cunningham, Armitage has created her own "voice" in the dichotomy of classical and modern dance and is seen by some critics as the true choreographic heir to the two masters of 20th century American dance.

Known as the "punk ballerina," Armitage created her first piece in 1978, followed by the iconic Drastic-Classicism in 1981. Throughout the 1980s, she led her own New York-based dance company, The Armitage Ballet. Commissions from the Paris Opera Ballet and American Ballet Theatre led to an array of choreographic commissions for companies around the world, including the Bolshoi Ballet in Moscow, the Ballet de Monte Carlo, Ballet Nacional de Cuba, The Washington Ballet, and Alvin Ailey American Dance Theater. Armitage served as Director of the 45-member MaggioDanza, the Ballet of Florence, Italy (1996–2000), the Biennale of Contemporary Dance in Venice (2004), and as resident choreographer for the Ballet de Lorrine in France (2000–2004). After her company's successful season at the Joyce in 2004, Armitage's focus shifted to creating her New York-based company, Armitage Gone! Dance.

Armitage is renowned for pushing boundaries to create contemporary works that blend dance, music, and art to engage in philosophical questions about the search for meaning. She is the Mildred Londa Weisman Fellow at the Radcliffe Institute in 2015–2016.

She will be joined in conversation with Richard Colton, who founded and directs, with Amy Spencer, Summer Stages Dance at The Institute of Contemporary Art/Boston, a nationally renowned dance workshop and performance series that takes place each summer at the ICA. As a performer, his professional career began in New York City in the 1970s. Colton was a member of Twyla Tharp Dance, where he served as Rehearsal Director for Tharp, and the White Oak Dance Project, under the direction of Mikhail Baryshnikov. In addition, Colton was a member of American Ballet Theatre, Joffrey Ballet, and James Waring Dance Company at Judson Memorial Church.

This event at the Radcliffe Institute is part of the Initiative on Native and Indigenous Peoples.