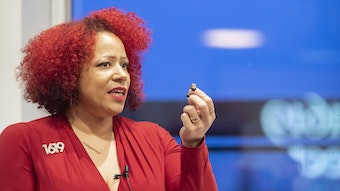 Play video
Perfecters of This Democracy: A Conversation with Nikole Hannah-Jones Is Now the Time to Build a Better System? K–12 Education and Systemic Racism in the Era of COVID-19 Global “Vision”

“Vision & Justice” is a two-day creative convening that will consider the role of the arts in understanding the nexus of art, race, and justice.

This public event, conceived by Sarah Lewis, an assistant professor of history of art and architecture and of African and African American studies at Harvard University, grows out of the award-winning "Vision & Justice" issue of the photography journal Aperture (May 2016), which she guest edited. The convening is organized around three guiding questions: How is the foundational right of representation in a democracy—the right to be recognized justly—tied to the work of images in the public realm? What is the role of the arts for justice? How have narratives created by culture—the arts, performances, and images—both limited and liberated our definition of national belonging in this digital age?

The convening takes its conceptual inspiration from Frederick Douglass’s landmark Civil War speech “Pictures and Progress,” about the transformative power of pictures to create a new vision for the nation. In this long-understudied speech, Douglass described a vision of race, citizenship, and image making that he stated might take a century or more to be understood. This “Vision & Justice” convening will focus on both the historic roots and contemporary realities of visual literacy for justice in American—and particularly African American—civic life.

The event is hosted by the Radcliffe Institute for Advanced Study, with additional major funding from the Ford Foundation, and is cosponsored by the Hutchins Center for African & African American Research, the Harvard Art Museums, and the American Repertory Theater.

The program will emphasize short presentations with the goal of outlining and catalyzing ideas for future work in art and justice around the country and the world. The sessions will focus on a wide variety of related topics, from “Race, Justice, and the Environment” to “Cultural Narratives and Media.” The program incorporates a range of dynamic speakers and events, including a performance by Carrie Mae Weems; a conversation about Central Park Five, the forthcoming miniseries by Ava DuVernay and Bradford Young, with Henry Louis Gates Jr.; and a performance by Wynton Marsalis. Mona Hanna-Attisha, who discovered the Flint, Michigan, water crisis, will exchange ideas with Chelsea Clinton, and LaToya Ruby Frazier, who used her camera to highlight the injustice on the ground, will show one of her videos. The event culminates on Thursday with the conferral of the inaugural Gordon Parks Foundation Essay Prize and a keynote by the social justice activist Bryan Stevenson on Friday evening.

“Gordon Parks: Selections from the Dean Collection” opens at the Hutchins Center’s Ethelbert Cooper Gallery of African & African American Art in tandem with the convening. A public reception takes place on April 26, and the exhibition runs through July 19, 2019.

This public-facing event will convene a large group of prominent activists, academics, artists, and public servants. The event will be streamed live and recorded for later posting online as part of the Radcliffe Institute’s commitment to bringing its programming to audiences around the world.

REMARKS ABOUT THE GORDON PARKS FOUNDATION

RACE, JUSTICE, AND THE ENVIRONMENT

RACE, CHILDHOOD, AND INEQUALITY IN THE POLITICAL REALM

Sarah Lewis, assistant professor of history of art and architecture and of African and African American studies, Harvard University

Race, Childhood, and Inequality in the Political Realm

Introduced by Claudine Gay, Edgerley Family Dean of the Faculty of Arts and Sciences and Wilbur A. Cowett Professor of Government and of African and African American Studies, Harvard University