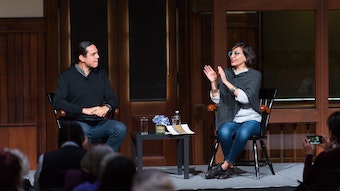 Play video
WHEREAS: A Poetry Reading and Discussion with Layli Long Soldier . . . first in thought, then in action. Diary of a Tap Dancer

Clint Smith is a doctoral candidate at Harvard University and an Emerson Fellow at New America. He has received fellowships from the Art For Justice Fund, Cave Canem, and the National Science Foundation, while his writing has been published in the New Yorker, the New York Times Magazine, the Atlantic, Poetry Magazine, the Paris Review, and elsewhere. His first full-length collection of poetry, Counting Descent, was published in 2016. It won the 2017 Literary Award for Best Poetry Book from the Black Caucus of the American Library Association and was a finalist for an NAACP Image Award. Smith teaches writing and literature at the D.C. Central Detention Facility in Washington, D.C. His debut nonfiction book, How the Word Is Passed, which explores how different historical sites reckon with—or fail to reckon with—their relationship to the history of slavery, is forthcoming from Little, Brown.

Introduction by Amanda Gorman, a Harvard College senior studying sociology and the inaugural National Youth Poet Laureate of the United States. She has written for the New York Times and performed several times on CBS This Morning. She has two books forthcoming from Viking.

The reading will be followed by a Q&A session with the speaker.