Angela Davis—scholar, author, and black feminist philosopher—is one of the most recognized political activists in the United States. 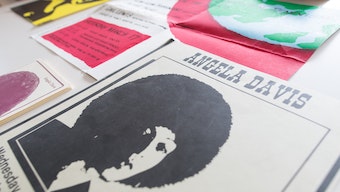 She writes and lectures on social injustice, social movements, the intersections of race, gender, and class, the prison-industrial complex, and prison abolition. She has published many books, including Angela Davis: An Autobiography (1974); Women, Race, and Class (1983); Blues Legacies and Black Feminism: Gertrude "Ma" Rainey, Bessie Smith and Billie Holiday (1999); and Abolition Democracy: Beyond Prisons, Torture, and Empire (2005).

In 1970, Davis was charged as an accomplice to conspiracy, kidnapping, and murder. Her arrest sparked an international campaign to gain her release. In 1972, after a high-profile trial, she was acquitted of all charges. Davis is an advocate for prisoners' rights and a founding member of Critical Resistance, a national organization dedicated to abolishing the prison industrial complex.