A World Wide Telescope image of the Radcliffe Wave set over an artist's illustration of the Milky Way. Courtesy of Alyssa Goodman/Harvard University 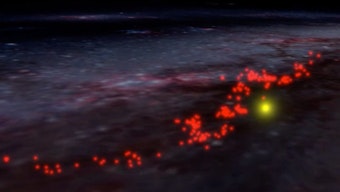 One and a half million kilometers from Earth, the Gaia space observatory is carefully plotting the position, brightness, distance, and motion of a billion stars, giving us a new way of seeing and knowing our galaxy. Far from the glare and pull of our planet, its gaze is helping scientists redraw the map of the Milky Way and revealing giants hidden in plain sight.

In a practical sense, the cornucopia of data flowing from Gaia is what motivated João Alves, a professor at the University of Vienna, to apply for a fellowship at Radcliffe, where he could collaborate more easily with fellow astronomers at the Harvard-Smithsonian Center for Astrophysics. But a year at the Institute is about finding inspiration outside your comfort zone. At Radcliffe, it was the visual arts that ignited Alves’s imagination and guided him to a new astronomical discovery.

“I came to Radcliffe to make a map of the galaxy, but I found many things I didn’t know I was looking for,” said Alves, who was the 2018–2019 Edward, Frances, and Shirley B. Daniels Fellow. “When I first arrived, I attended an exhibition of Anna Von Mertens’s work. She was talking about how the women ‘computers’ [at Harvard] had opened up the universe by measuring distances in the galaxy—a story astronomers know well. But she was telling this story with a quilt, which had these trails of stars. It brought me right back to when I was six, when I first saw those long-exposure images of stars going over the horizon and leaving trails.

“I got to meet the artist, and we started talking more and more, looking together at the scientific astronomical images I was working with. What blew my mind was how differently she looked at the image. She would talk about how the universe opens up, and ask all these questions no one else would ask. I realized that if I started thinking like a visual artist, I could see much more in my own work. That was a very important moment.”

As Alves and his colleagues worked on drafting a new map of the stars, they were drawn to a particular set of dust clouds—star-forming regions—in the Milky Way. The scientists explored whether these clouds might be connected, perhaps in a ramp shape between Orion and the Milky Way plane. But as he thought about it, Alves kept returning to the stitching Von Mertens used in her work. Looking at the galaxy through the eyes of an artist, he wondered whether the ramp might be something more: an arc, a wave, or even a series of waves and ripples, just like a stitch on the Milky Way plane.

Harvard GSAS student Catherine Zucker was at the heart of the collaboration, working with Alyssa Goodman, an astronomer and a faculty codirector of Radcliffe’s science program, to expand statistical tools so that they could crunch the immense data set from Gaia.

The team’s discovery of the “Radcliffe Wave,” with Alves as lead author, was published in Nature on Tuesday. The findings provide a new 3-D map of our galactic neighborhood, giving scientists a revised view of the Milky Way and opening the door to other major discoveries.

“Catherine made this heroic effort to run a compute-intensive calculation and bang, it was there,” said Alves. “An arc, right where we expected it to be. At a certain point, we were finding clouds on the other side of the galactic plane that could match the giant galactic stitch idea—but where was the link? The plane can be confusing, as too many clouds align along the same line-of-sight. But with the idea of a galactic stitch, we kept searching and found the linking clouds. The arc became a wave, and our view of the sun’s galactic neighborhood changed. We are all so surprised—we’ve been sitting next to a giant for millions of years, and never realized it.”

The research intersected perfectly with Von Mertens’s exhibition, which emerged from her study of Harvard’s Astronomical Photographic Plate Collection at the invitation of Jennifer Roberts, the Johnson-Kulukundis Family Faculty Director of the Arts at Radcliffe and Elizabeth Cary Agassiz Professor of the Humanities in the Harvard Faculty of Arts and Sciences. The glass plates are among the oldest recordings of the night sky, some dating back to the mid-1800s.

“I met João when I was focusing on Henrietta Leavitt, who was hired along with her fellow ‘computers’ at a particular historical moment when a new technology [dry plate photography] was producing a huge volume of data to be processed,” said Von Mertens.

“Henrietta’s work was about noticing,” said Von Mertens. “Seeing clearly is not as easy as it sounds—we either don’t have the technology or we have a set belief in place that you have to see against. So, the idea that seeing is the primary action of a scientist—that’s just like an artist. Another thing João and I share is that we both use fundamental, elemental tools in our work. For João that tool is parallax, the original way to measure distance to the stars, only now he’s using it at a new volume. For me, it’s the simple element of the hand stitch or the making of a mark. Through volume and repetition, it builds into something.”

“Astronomers should learn from visual artists,” said Alves. “We’re trained in ways that are optimized for instrumentation and technology, and that can narrow our horizons. By collaborating with artists, whether it’s music, textiles, or poetry, we have still another new way of seeing the universe.”

For both the artist and the astrophysicist, their time at Radcliffe—a chance to share ideas with people in science, art, and humanities—was a defining experience.

“What I loved about it was the first time we set up a meeting there wasn’t an agenda—it was just exploratory,” said Von Mertens. “We met several times throughout the year without having a set idea of what we were going to get at. That feeling was particular to Radcliffe.”

“You never know where inspiration will come from,” said Alves. “If I had stayed in my usual place in Vienna, we would have found little connections here and there, and I would have been content with finding an arc. Instead, I started to see things I wouldn’t have looked for, and we discovered the Radcliffe Wave.”

Mary Todd Bergman is the senior communications officer for science in Harvard Public Affairs and Communications.