I can tolerate disorder for a short while as long as I recognize it for what it is—the bedroom door that won’t latch, the grinding noise from the icemaker, the funky smell from the shower drain.

Something in the recognition itself soothes me. It tells me that my give-a-fuck remains intact. And as long as that’s the case, I will not descend into chaos, at least not yet. I know that chaos is coming for me and everyone I love, regardless. I understand that there is no way around it, no compromise to be made. For all I know, the inevitable triumph of chaos may be divine, but I will settle for painless. I will settle for a suspension of loss. In the meantime, I make the bed every morning. I wind the cuckoo clock and set its pendulum in motion. If I am feeling tolerant of the disorder that surrounds me, I sit at my desk and write. If not, I start fixing stuff.

One thing that needs frequent fixing is my old Toyota 4Runner. The first time it blew a head gasket, I rebuilt the engine. The second time it blew a head gasket, I removed the old engine and installed a remanufactured one. When the crankshaft in that engine broke, I pulled the engine, palletized/shrink-wrapped it, and shipped it off for repairs. Months later, I reinstalled the now re-remanufactured engine. It ran fine up until January, when the heater core burst, dumping steaming radiator fluid into the passenger-side footwell.

As its name suggests, the heater core is central to the vehicle’s production of heat. Hot antifreeze from the engine passes through its coiled tubes, warming the surrounding air, which can then be piped into the cabin through the vents. With months of winter remaining, I ordered a new part and got to work removing the old one.

The heater core is buried deep inside the dashboard behind pretty much everything: radio, airbags, steering wheel, glove box, speedometer, each of which I unbolted, pried free, disentangled, disconnected, and removed. Along the way, I banged my head and skinned my knuckles many times, and used just about every tool that I own: mirror, headlamp, swivel joint, impact extensions, deep sockets, gear wrench, needle-nose pliers, mallet, tweezers, hacksaw. Looking at the ever-growing pile of ducts, wires, brackets, switches, and dials accumulating on the garage floor, I had no idea how I’d get it all back together. Finally, I used a monkey wrench to yank the damaged heater core from its rusty bed, then I held it up to the sky as if it were Excalibur.

The pandemic arrived soon thereafter. The resulting shutdown gave me no reason to drive, let alone finish repairing the heater core. Eventually, I moved the pile of dashboard parts from the garage floor into the 4Runner, which was parked in the driveway, and I locked the doors on the entire mess. There it sat for the remainder of the New Mexican winter, covered in ice and snow. Spring winds brought dirt from the nearby desert, rain turned the dirt into mud. Summer baked the mud into a hard coat of grime. Spiders took up residence in the wheel wells. Entropy continued apace, and my tolerance for it grew. News from the outside world worsened every day, and the denials, lies, and anger provoked by the news seemed even worse. I worried that no amount of give-a-fuck could counteract the approaching chaos.

One morning, as I was writing, the doorbell rang. I opened the door to watch the UPS truck drive away. On the step was a large rectangular box addressed to me. I carried the box, which felt lighter than air, into the kitchen. I cut the box open with a steak knife and started removing wads of paper. I wondered if the box contained nothing but wadded-up paper, if the whole thing was some kind of joke. Then I saw it, the new heater core. It looked just like the old heater core only shinier, like a bright and functional message from the future. I’d long since forgotten the steps I’d taken to remove the old heater core. There was, however, a hole where it used to be. I’d start there and work my way back.

Will Mackin is the 2020–2021 Perrin Moorhead Grayson and Bruns Grayson Fellow at Radcliffe. A 23-year veteran of the US Navy and a fiction writer, he is currently working on a follow-up to Bring Out the Dog (Random House, 2018), which won the PEN/Robert W. Bingham Prize for Debut Short Story Collection. 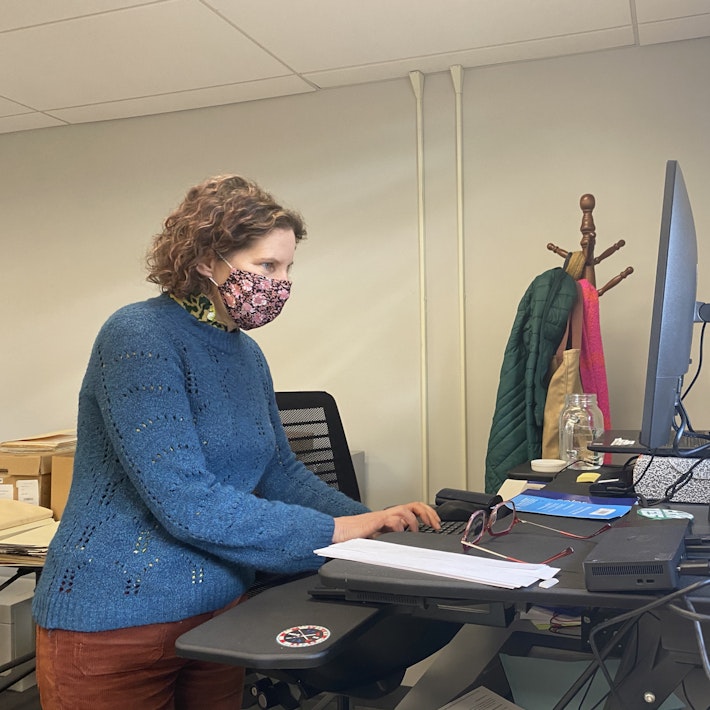