A rendering of student-designed public art to be installed this April in Harvard's Old Yard as part of this spring's Harvard & the Legacy of Slavery events. Rendering by Luke Reeve MDE '23

What must we now do, and how can we ensure that the revelation of this history can inspire renewed commitment to institutional reform, to community engagement, and to our highest aspirations as a community of learning? 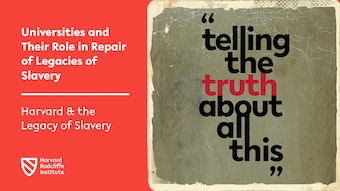 Play video
Telling the Truth about All This: Reckoning with Slavery and Its Legacies at Harvard and Beyond Inclusions: Envisioning Justice on Harvard’s Campus

Harvard University President Lawrence Bacow launched the Presidential Initiative on Harvard & the Legacy of Slavery (H&LS) in 2019. Since that time, in addition to public programming and grants that have supported student research and creative projects, much of the work of the initiative—including many months of painstaking research and writing—has taken place behind the scenes.

This spring, the initiative, led by Harvard Radcliffe Institute Dean Tomiko Brown-Nagin, will present its findings about Harvard’s entanglement with slavery and its legacies, as well as recommendations for reckoning and repair.

Through the release of the faculty committee’s report and recommendations along with a series of major events, H&LS will ask: what must we now do, and how can we ensure that the revelation of this history can inspire renewed commitment to institutional reform, to community engagement, and to our highest aspirations as a community of learning?

The following are some of the events scheduled for this spring, culminating in a marquee conference on April 29, titled “‘Telling the Truth About All This’: Reckoning with Slavery and Its Legacies at Harvard and Beyond.” Expected to draw community members, scholars, leaders, and advocates from around the world, the conference will grapple with the unique role and obligations of institutions of higher education.

“The goal of the conference,” says Brown-Nagin, “is to ask, ‘What must we do to reckon with the history that Harvard and other institutions have revealed? And how can we engage a broad community in genuine, lasting partnership as we undertake this work?’”

Planned panels will address universities and their role in the repair of legacies of slavery, sites of memory and repositories of knowledge, and innovative approaches to public engagement with history.

The initiative will also release a new film in which scholars and students talk frankly about the history examined by the initiative and call the Harvard community to action. The film was conceived by the H&LS Subcommittee on Curriculum led by Martha Minow, the 300th Anniversary University Professor and a former dean of Harvard Law School, and Meira Levinson, the Juliana W. and William Foss Thompson Professor of Education and Society at the Harvard Graduate School of Education. It is both an introduction to the committee’s findings and an invitation to the Harvard community to join in shaping a better future.

H&LS spring events kick off a month before the conference, on March 24, when Michael Twitty, a historical interpreter and scholar of African American foodways and their legacies, will discuss his influential work in a program offered jointly with the Royall House and Slave Quarters in Medford, Massachusetts.

On April 8, the Aeolians of Oakwood University will perform at Harvard’s Sanders Theater, together with Harvard College choral ensembles. The world-renowned Aeolians, a noted exponent of Negro spirituals and work songs with a vast repertoire from the Baroque era to the 20th century, will premiere compositions by Marques L.A. Garrett and Rosephanye Powell, which were commissioned for the event by Harvard’s Department of Music. The choir was founded by Eva B. Dykes, the first Black woman to earn a doctorate at Radcliffe College and one of the first three Black women to earn PhDs in the United States, all in 1921. The performance will be preceded by a panel discussion reframing the racialized history of American choral music and is offered in partnership with the Eileen Southern Initiative.

In April, the Harvard Office for the Arts, with support from the initiative, will unveil a student-designed temporary art installation in Harvard’s Old Yard (see lead image).

Also planned for this spring is a ceremony of remembrance and healing. Details are to come.

In addition, a virtual walking tour exploring the history of slavery, its legacies at Harvard, as well as Black resistance and resilience in and around the University will be available as a free app and online. And a new digital archive will feature the stories and struggles of several early Black graduates of Harvard and Radcliffe.

The initiative and its researchers are also examining the ways in which the past continues to shape the present at Harvard and beyond.

Anthony Abraham Jack, a Shutzer Assistant Professor at Harvard Radcliffe Institute, a current Radcliffe fellow, and an assistant professor of education at the Graduate School of Education, is leading a new study supported by the initiative examining the impact of the recent convergence of a reckoning over long-standing racial inequalities, a global pandemic, and, for many, an economic crisis. Jack and his research team have interviewed 120 Black, white, Latinx, Asian, and Native undergraduates, with particular emphasis on understanding the experiences of generational African American students at Harvard—those whose families trace their ancestry to the era of enslavement in the United States. Jack’s findings are informing the recommendations of the H&LS faculty committee and will be the basis of an important new book, tentatively titled “That False Sense of Security.”

Finally, a new Harvard Graduate School of Education course taught by Levinson will invite graduate and undergraduate students from across Harvard to collaborate on developing a series of normative case studies and accompanying teaching guides that focus on the complicated and ambiguous ethical choices facing individuals, departments, and institutions as they reckon with the report’s findings.

Through the course, students will learn how to research, write, and teach normative case studies that encourage deep and thoughtful exploration of difficult ethical decisions, creating pathways to engage communities across the University and in classrooms, homes, streets, and parliaments around the globe.