History Comes Alive through the Archives

During a class, a student looks at one of the many photographs pulled by librarian's from the Schlesinger's archives. Photo by Tony Rinaldo

Professor Laurel Thatcher Ulrich's class, Well-Behaved Women Seldom Make History, is “a hands-on introduction to history making in its many forms,” and the Schlesinger’s manuscripts and artifacts are the means.

On a recent afternoon, 11 Harvard students gathered in the light-filled Radcliffe Room of the Schlesinger Library for a research seminar taught by the historian Laurel Thatcher Ulrich AM ’95. Half of the two-hour class was spent discussing the reading—pretty standard for a college class—but it’s the second hour that set it apart.

Displayed on carts and tables around the room was a wealth of materials pulled by the three librarians on hand, including Ellen Shea, the head of research services and Ulrich’s primary collaborator for the course. Tiny hinged frames rested on foam cradles, open file boxes beckoned, and clean white cotton gloves lay at the ready.

“It’s going to be a very visual day,” declared Ulrich, a historian of the United States and Harvard’s 300th Anniversary University Professor. For class that day, the librarians had pulled myriad photographs out of the archives—from daguerreotypes to Polaroids—dating as far back as the Civil War.

Over the next two classes, the students would discuss autobiography, fiction, and the history of the Civil War—after reading Hannah Crafts’s The Bondswoman’s Narrative (Warner, 2003), believed to be the first novel written by an African American woman, and then watching the documentary film Rebel (2013), directed by María Agui Carter ’86, which recounts the story of Cuban-born Loreta Janeta Velazquez, who fought in the Civil War as a Confederate officer and a Union spy. By the end of the course, they will have considered questions of gender, identity, and authenticity—and also learned about and explored primary sources. Ulrich and the Schlesinger are bringing the archives alive for these undergraduates in a unique way.

Nora C. Garry ’14, a concentrator in studies of women, gender, and sexuality, notes the importance of archival research to humanities scholarship. But Ulrich’s class also offers “something we can’t re-create by visiting the Schlesinger on our own time,” she says. “It models proper archival engagement and promotes communal scholarship.” Garry appreciates being able to share her findings with classmates as she encounters them, and she believes that the course’s value is enhanced by its communal nature.

Shea agrees that the course offers a singular experience. “While doing research, you’re in the reading room, alone and in a controlled environment,” she says. “You often don’t get to share your eureka moments like these students do.” 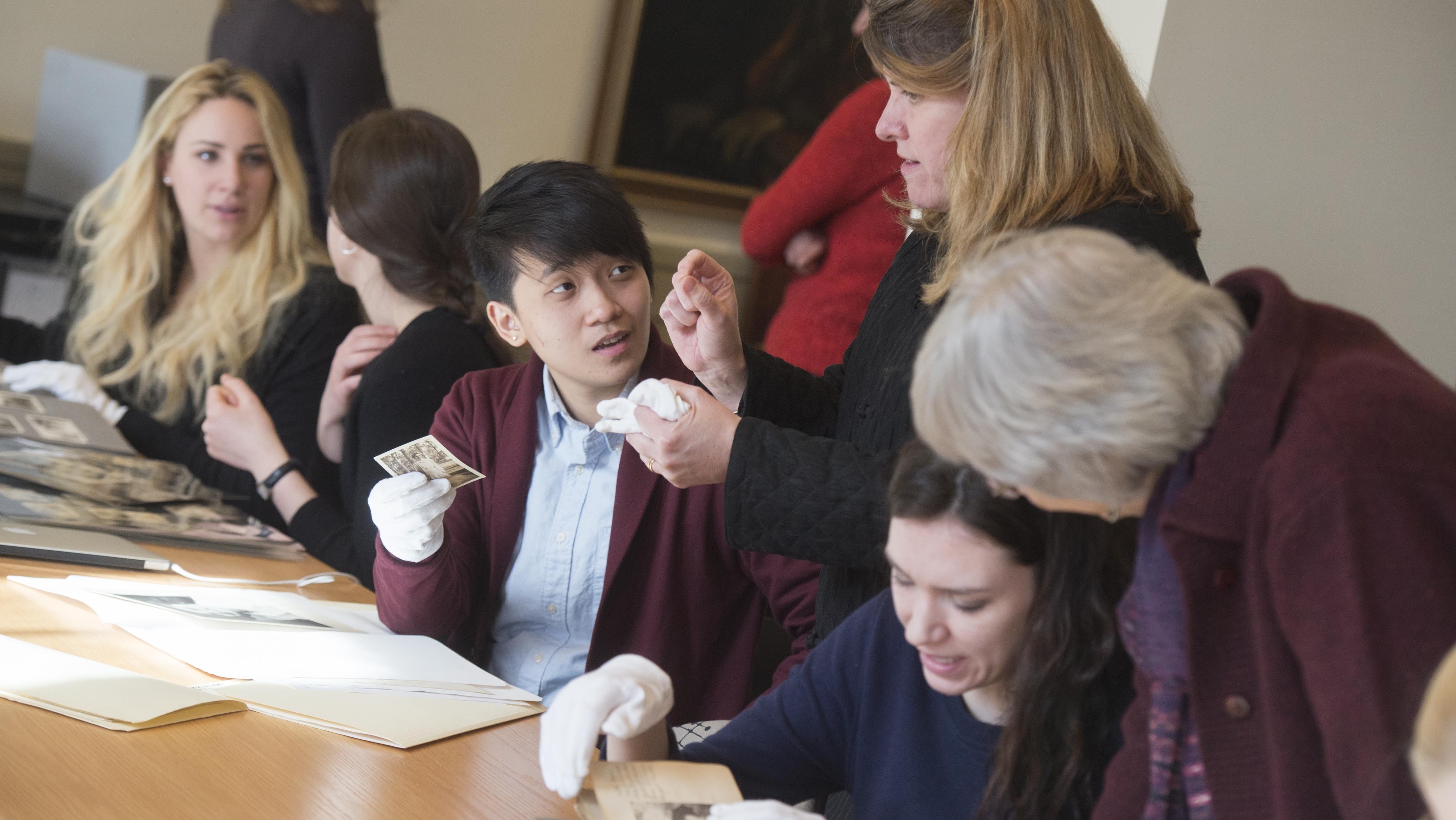 Documents and Other Tangible Materials

Inspired by and named for Ulrich’s 2007 book Well-Behaved Women Seldom Make History (Knopf, 2007), the course (WGS 1442) is described as “a hands-on introduction to history making in its many forms,” and the Schlesinger’s manuscripts and artifacts are the means. For some time, Ulrich taught classes in which students worked with museum artifacts. “It occurred to me: documents,” she says. “Documents are artifacts, and something happens when students are connected to real stuff.”

For Talia Weisberg ’17, a first-year student considering a concentration in studies of women, gender, and sexuality, the direct connections to history are key. “I have never before been able to work with primary sources in a library or class,” she says. “I find it really exciting just to work with these original documents, since I know that they meant a lot to their original owners.”

“Coming up close and personal with manuscripts and correspondence forces you to realize the humanity of your subject,” Garry adds.

Ulrich previously collaborated with staff members while developing a course and related exhibit titled Tangible Things, which highlighted treasures and curiosities housed in University collections by displaying them in unusual locations. For that collaboration, the Schlesinger displayed a document from a different Harvard library (a guest object) and lent materials of its own to the central exhibit. 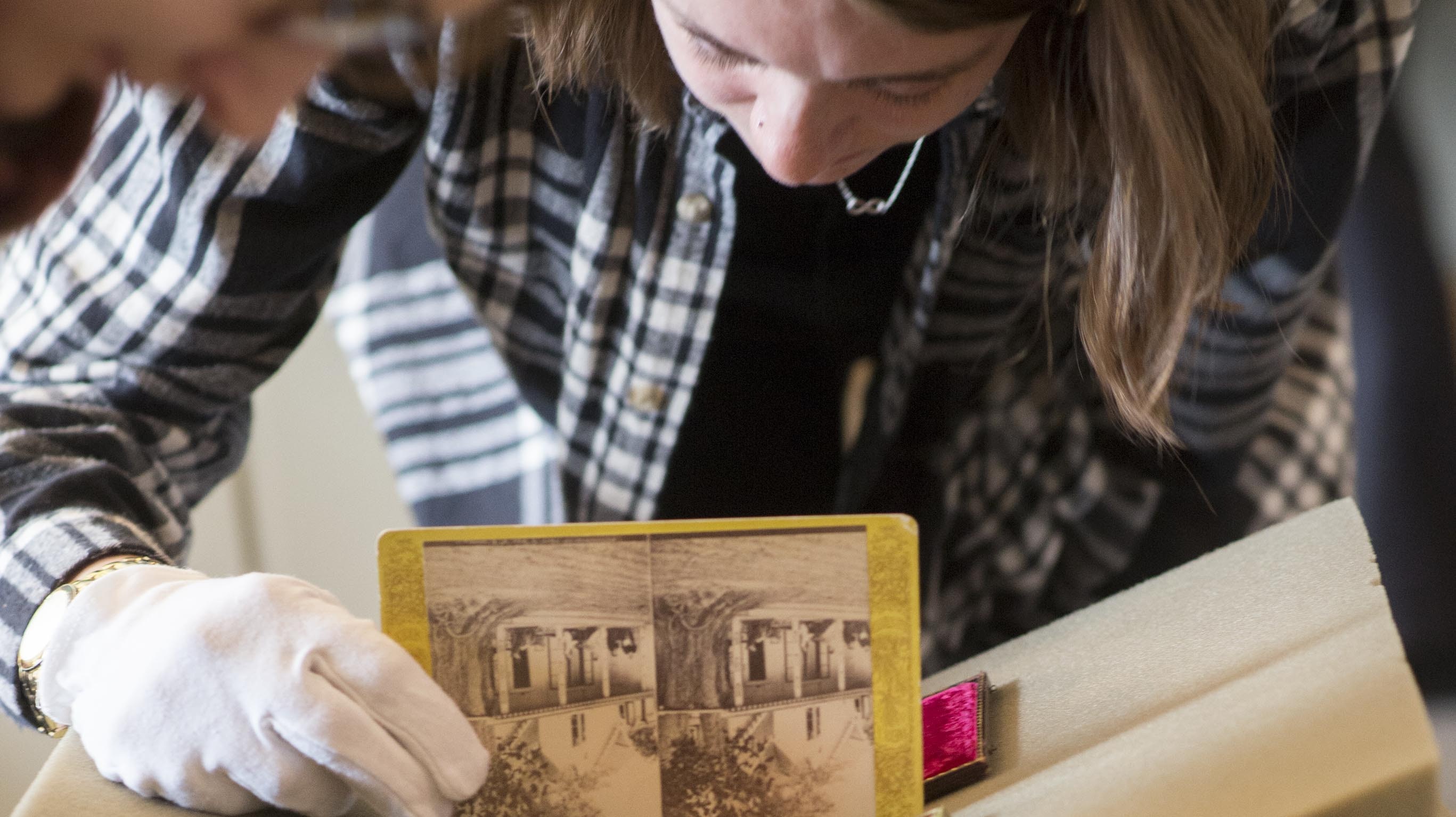 Although the Library often hosts single classes during which librarians discuss collections specifically relevant to a course, Shea says that in her 20 years at the Schlesinger, no one course has drawn from its collections to the extent that Well-Behaved Women does.

After consulting with Ulrich about what types of materials might best illustrate the week’s themes, Shea gets feedback from the archivists. “I know the collections very well and have had my hands in many of them over the years,” she says. “But the archivists may remember something from processing that I’ve never seen before.” She aims for items that will excite students with a “wow factor.” In a recent class, for example, students read letters and diaries written by Radcliffe students from the 1890s, 1920s, and 1950s. The current students found them surprisingly relevant. “One of the students said the only thing that had changed was the taxi fare from Logan to Harvard Square,” Shea says.

Ulrich’s students have considerable freedom for their final projects—they can produce a scholarly essay or a creative project, among other options—but they must undertake original research at the Schlesinger.

These 11 students will have spent an entire semester surrounded by the riches of the Schlesinger, but they’re not the only beneficiaries of Ulrich’s course. “It would be great if there were a class like this every year,” says Shea. “It’s energizing for the staff and a great use of our resources.”