As Suzanne Mettler followed the events at the Capitol on January 6—“one of the most shocking and horrifying days of my life,” she says—the violence, chaos, and Confederate nostalgia of one insurrection conjured the spirits of another.

“When I was looking at what was happening on January 6, I was thinking about that coup d’état in Wilmington,” Mettler, a 2019–2020 Katherine Hampson Bessell Fellow and Cornell political scientist, recalls.

The 19th-century North Carolina insurrection is brought to chilling life in Mettler’s 2020 book, Four Threats: The Recurring Crises of American Democracy, coauthored with Robert C. Lieberman. On November 10, 1898, the Democratic elite of Wilmington, enraged by African Americans’ cultural, economic, and political progress in the years since the Civil War, conspired with white supremacist paramilitary groups to terrorize Black neighborhoods and savagely dismantle a model of biracial government. Hundreds were killed; the African American police chief and several other municipal officials, including white Republicans, were driven from the city at gunpoint; and the Daily Record, a Black-owned newspaper, was burned to the ground. Threatened into submission, the state’s Republican governor rejected calls to request federal help, and President William McKinley was not otherwise moved to intervene. The rampage promised “permanent good government by the party of the White Man,” a leading insurrectionist wrote. His message quickly spread, burying the hopes of his victims under decades of racist policies and brutality.

Wilmington is a turning point in Four Threats, a historical narrative in which Mettler and her coauthor foreground the effects of polarization, racism, economic inequality, and expansions of executive power on American democracy, building to the convergence of those threats in recent years. We talked to her about white supremacy, democratic norms, and more. The interview was edited for clarity and length.

Radcliffe: Can you describe some of the parallels between January 6 and the 19th-century insurrection in Wilmington?

Mettler: There are a couple of similarities. One is that you have white supremacy out in the open, motivating people who are determined to keep political power or take back power, and to do so by force. But then, also, you zoom out a little bit, and you ask “Why are they there?” It’s not just a bottom-up phenomenon; rather, they are there because political leaders told them to be there. President Donald Trump called his followers to come. He kept telling them for two months that the election was stolen, despite officials of both parties and at the state and local level who said that it was a fair election, and despite the courts throwing out the cases that the Trump campaign was bringing forward. Trump kept telling his supporters that in fact he’d won the election and that they should come and fight for his victory. That’s what they did. And that’s in some ways reminiscent of what was happening in the 1890s, although back then it happened in states across the South, not at the seat of national government. In North Carolina, the leaders of the Democratic Party knew that their way back to power was to stoke white supremacy and resentment, and that that would motivate their supporters to resort to violence and help them reverse the result of democratic elections. 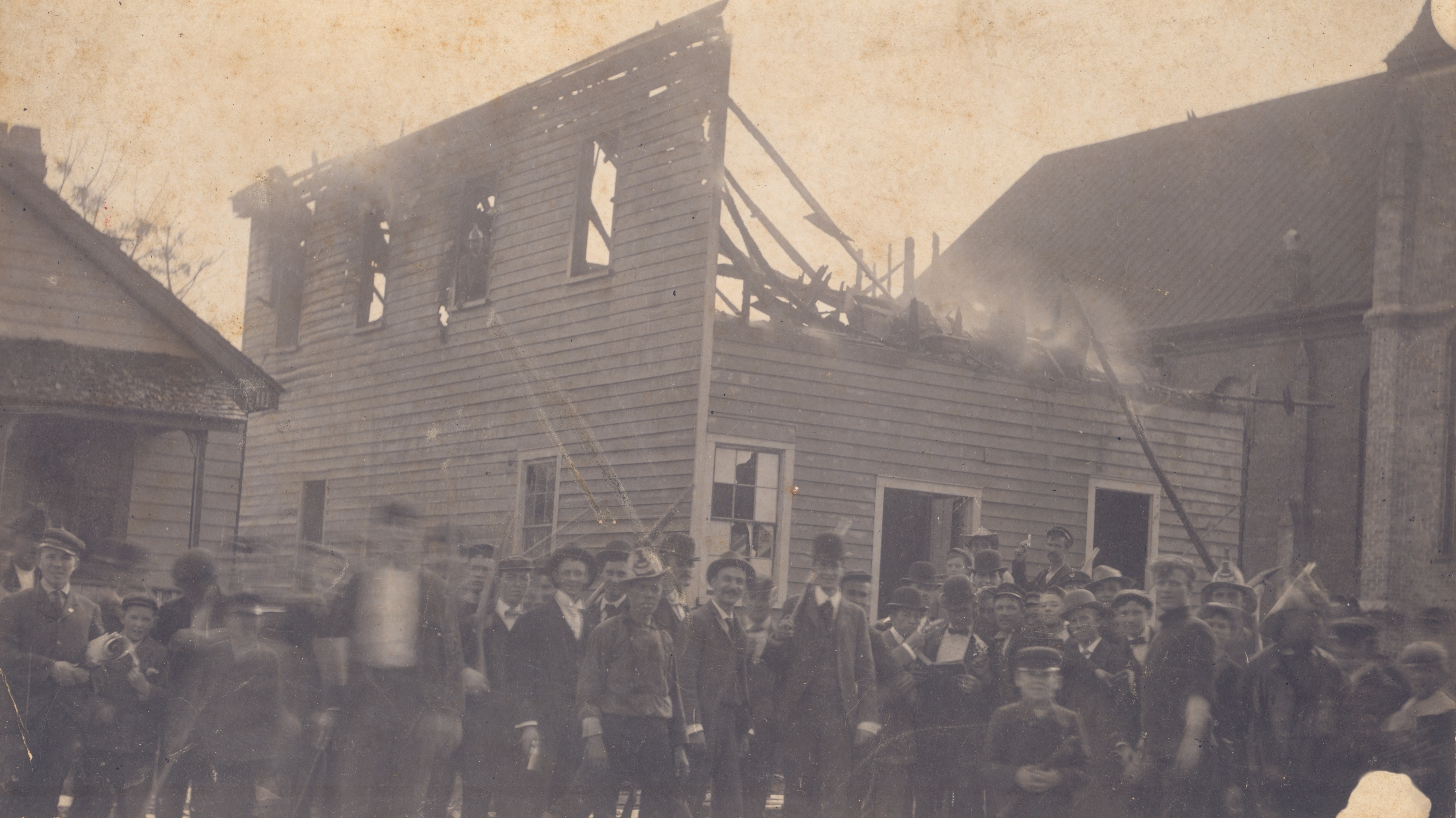 Radcliffe: I wonder about your reaction to the idea of January 6 as an aberration in US history. After reading your book, it seems like the attack was less an aberration than an extreme example, or a recurrence, of forces that have been with us since the country’s birth.

Mettler: When Joe Biden went on the air and spoke that night, he said something that he’s often said in his speeches the last couple years: “This is not who we are.” The trouble with his statement is that it’s actually wrong. I think what Biden means is, “This is not who we want to be.” But sadly, what happened on January 6 reflects much of who we have been in the American past. Writing Four Threats was very sobering to me—it was a big eye-opener. Trends that we’re seeing right now in American politics have roots that go way back in American history, including a long history of white supremacy being used politically and being the source of ardent political polarization and violence.

Polarization becomes particularly strident when it combines with what Rob and I call conflict over who belongs as a member of the political community. And in the periods that we study, conflict over race becomes crucial. Racism and white supremacy become the rallying cry of one side in that conflict particularly when the other side is seeking greater equality. That can really drive polarization. That happened in the 1850s and the 1890s, and it’s happening again today.

Radcliffe: How much trouble are we in, compared with crises of the past?

Mettler: Elections are the most fundamental act of what makes a country democratic. Elections produce both winners and losers, and what’s crucial is how the losers behave. Those competing for public office must agree in advance that win or lose, they will abide by the rules. The candidates who lose elections must be willing to face it and to step aside. If a party refuses to abide by that basic principle, democracy’s over.

We are at a very bad point right now. Arguably we are in the worst state we’ve been in since sometime in the 19th century surrounding the Civil War. Polarization keeps deepening.

Radcliffe: Newt Gingrich, the Republican speaker of the House from 1995 to 1999, emerges in Four Threats as an important figure, both for his belief in the power of conflict and the overlap of that belief with a changing media environment. The book includes a passage in which he tells a group of conservative activists about the media: “You have to give them confrontations. When you give them confrontations, you get attention; when you get attention, you can educate.” How much of a factor is Gingrich’s legacy in today’s politics?

Mettler: I don’t want to give all the credit to Gingrich and congressional leaders. There were grassroots changes that were leading to a new kind of partisan sorting; you have this long, gradual process that happens over many decades. But meanwhile, starting in the late 1970s, you have Gingrich and Dick Cheney and a few other new Republicans in Congress, the young guns of their era—and they’re brash. They say, “We’re tired of our party being the minority around here; we want to find ways to start winning elections.” Their strategy is to stop compromising, basically. And to stop focusing on trying to create public policy. Republicans had been the minority in Congress, but many of them had played very instrumental roles in creating public policies along with the Democrats; they were partners in policy making. Gingrich’s strategy was to stop doing that, and instead, to play a much more hostile politics game, using the media.

From 1980 to the present, we’ve moved into a new historical period, very different from the middle of the 20th century because elections are much more competitive. In any given year, either party stands to win the majority in the House and often in the Senate, depending on which seats are up. The way both parties have responded to that—and here I’m referring to the work of a political scientist named Frances Lee—is that, instead of devoting their resources to policy making, they’ve shifted their funds to public relations. They try to have a lot of symbolic votes that cater to their base. Even if it’s not legislation that’s going to pass—it communicates well to their base.

“I’m doubtful that democracy can endure unless our two major parties are both willing to support it.”

Radcliffe: Are there any lessons from recent events, in terms of the health of our democracy, that the country seems poised to act on?

Mettler: I wish I could say that we’ve learned, but I’m not so sure. What, really, these last few months have revealed is how divided we are as a country—the polarization is really stark, and it’s combined with this conflict over who belongs. That’s going to be with us for some time and may get in the way of big reform. But we have to at least try to do smaller reforms. I have to believe that members of Congress on both sides of the aisle recognize the needs for those smaller reforms.

Radcliffe: Was there anything about January 6—in the institutional response, for example—that you found encouraging?

Mettler: The fact that members of Congress came back into session that night and finished their work, and certified the election—that was a triumph for democracy. But the fact that 139 members of the House, and several in the Senate, voted against accepting results from key states—that was extremely disturbing. The trouble is that the Republican Party seems to have become what political scientists call an anti-system party; it’s increasingly willing to part ways with the basic rules of democracy. When you’re not willing to concede an election, for example, and you tell your supporters that the results are wrong—that’s fundamentally problematic. That means that it falls to the other party alone to try to protect democracy. The Democratic Party has been trying to do that these past four years. But I’m doubtful that democracy can endure unless our two major parties are both willing to support it. On the bright side, after the election we saw many state and local officials nationwide who really did their job, regardless of which party they were in—they played by the rules.

Radcliffe: Do you worry about wider civil conflict in the United States?

Mettler: There are scholars of political behavior who are finding that a not-insignificant portion of the American public thinks that it’s appropriate to use violence to win elections or to gain back power to preserve what they value. That’s really disturbing. Right now we are not sectionally divided, as we were in the Civil War—it’s not North vs. South. We have political divisions in every state, and there’s a gaping rural-urban divide. We have now witnessed the violence at the Capitol, and I do worry that we’re going to be seeing more violence going forward. I’m heartened that the Biden administration is trying to act quickly to take right-wing extremism, domestic terrorism, really seriously. That had been lacking for many years, and we ignore it at our peril.