How to Write What You Don’t Know

Even imaginary worlds are governed by rules, some more entrenched than others. “Write what you know,” counseled Mark Twain—or was it Ernest Hemingway?—and ever since, both aspiring and accomplished authors have treated this advice as an article of faith, mapping their fiction inside boundaries drawn by direct experience. But some minds can’t help but stray. 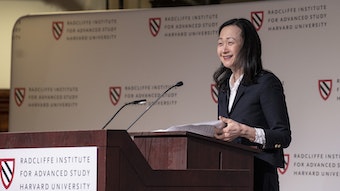 Play video
Are Koreans Human? Our Survival Powers, the Quest for Superpowers, and the Problem of Invulnerability

Kaitlyn Greenidge RI ’19, Lauren Groff RI ’19, and Min Jin Lee RI ’19 are in the latter group. The three novelists have made a point of pursuing topics they know scarcely or not at all, beginning each project with a research plan that a historian or biographer might find familiar. The book starts with archival work and oral interviews. It might include a trip to a local museum, a dive into a century-old novel, or a journey to a distant city. In one instance, submitting an application to Harvard Business School provided valuable insight (more on this later).

The authors have developed unique methods of producing fiction, even in the face of common challenges. For all three, the creative process is labyrinthine, lengthy, and fraught: one unexpected turn can throw a project completely off track. But for writer and reader, the results have rewarded the effort. In the work of Greenidge, Groff, and Lee, the stuff of dreams and the sweep of history give life to each other.

Kaitlyn Greenidge’s knowledge of subjects such as The Negro Motorist Green-Book and American Sign Language is so extensive, you might wonder how she finds time to write. The Massachusetts-born novelist included research on these topics and others in her first novel, We Love You, Charlie Freeman (Algonquin Books, 2016), which told a story shadowed by American eugenics movements and animated by conversations on family, language, and race.

Given the depth of research her writing requires, Greenidge could easily transition to a career in nonfiction, which she recognizes as the larger market. But her reasons for sticking with fiction run deeper.

“The types of stories I want to tell are very rarely popular in nonfiction,” she says. “Most of mass market nonfiction history is white-men-of-history stuff, which I’m definitely not interested in.”

In her time as the 2018–2019 Carl and Lily Pforzheimer Foundation Fellow, Greenidge made progress on her next project, which revolves around Susan Smith McKinney Steward, the first black female physician in New York State. Steward lived in Weeksville, a free black settlement in central Brooklyn, in the late 19th century. In her novel, Greenidge will also focus on Steward’s daughter, Anna, who moved to Haiti after marrying the son of the country’s Episcopal archbishop.

A lack of scholarship on life in 19th-century Haiti has frustrated Greenidge at times. She’s also mindful of the challenge of persuading readers to buy research-based books. “The difficulty is getting a casual reader who is not particularly interested in 19th-century geopolitics to care and to understand the complexity,” she says.

With so much information to keep straight, not to mention a story to tell, Greenidge finds that her thoughts sometimes wander to the future critic who will note any creative detour from the factual record. But she accepts that critic as part of the job. A writer who draws material and inspiration from history is constantly balancing fact with fiction—and managing the delicate convergence of the two.

“The point of researching fiction is to help you make something that stands up in a fictional world,” she says.

As a fiction writer, Greenidge appreciates the chance to identify and elevate smaller dramas nested inside her larger project, such as the life of the first American woman to own a mortuary. Henrietta Duterte, an African American whom Greenidge encountered in the course of her Radcliffe research, used coffins to smuggle escaped slaves on the Underground Railroad.

“That is way too good an image to not put in a novel,” she says. “Historians know they can’t write a whole history book about this type of detail because they can’t figure out how to fit it into a narrative. But many people would probably want to read about it, and it can fit into something like fiction.”

Rewriting can be a daunting task, but Lauren Groff seems to embrace it. She writes early drafts by hand, in a messy scrawl doomed to oblivion, since she can’t read her own writing.

“I would love to have a book that just comes to me intact, but it’s never happened,” says Groff, the author of three novels and two story collections. “It has to be destroyed and rebuilt multiple times.”

The Florida-based author always starts with research. At first, it’s disparate and disorganized. As she starts to write, the background work continues. Much of this labor never makes the page, and yet the reader would notice its absence. “The research is in the book in almost a ghostly form,” Groff says. “It’s like a phantom shadow throughout. Only I know it’s there, giving resonance to what is on the page, but I think that the reader can feel it under the surface.”

Groff, the 2018–2019 Suzanne Young Murray Fellow, planned to spend her semester at Radcliffe completing her current project, “The Vaster Wilds.” The novel-in-progress emerged from a collision of ideas and influences, including early American captivity narratives and Robinson Crusoe. But instead of applying the finishing touches, Groff decided she needed to rewrite yet again.

“I realized that the scope of the project was different than what I thought it was,” she says.

The lectures she attended at the Institute, along with the time to dig deeper into the stories behind her story, helped her envision the book she hopes to produce. “Radcliffe gave me beautiful avenues of research and incredible ways of seeing the larger project,” Groff says.

Her intensive research is a factor in all her work, although sometimes in stealth form. For her third novel, Fates and Furies (Riverhead Books, 2015), this was especially true. The novel, which was a National Book Award finalist and a favorite of President Obama, tells the story of a marriage from the perspectives of husband and wife.

“I wanted to write a book where the research was so hidden that you would just assume that it wasn’t there,” Groff says. “But I really did a great deal of research. I read at least 400 books and plays for that novel.”

Groff recognizes that her process is not the fastest route to a finished novel. But without the setbacks and surprises along the way, the work would most likely suffer. Over many drafts, the past—personal or topical— can inform a story in ways she never imagined. Back in 2006, as part of a book project, she began to acquaint herself with the life of the 19th-century writer Guy de Maupassant. Not until last year did that research surface, in the concluding novella of her most recent story collection, Florida (Riverhead Books, 2018).

Still, even as her thoughts roam, a natural stopping point awaits.

“After you’ve done as much research as you can, the things that remain in your mind are the things that really speak to the book at hand,” Groff says. “They’re the living details, the elements that hold a current of energy. There’s a moment where the electricity tells you that you’ve done enough research. Now it’s time to write.”

The Art of Conversations

Like any good researcher, Min Jin Lee, the 2018–2019 Catherine A. and Mary C. Gellert Fellow, begins each work with a thesis statement. What follows, however, is fiction.

Lee, who was born in Seoul and grew up in New York City, is the author of two novels and spent her fellowship working on a third, currently titled “American Hagwon.” The new work is focused on the role of education in the lives of Koreans around the world, and will complete her diaspora trilogy, The Koreans. Like the first two books in the series—Free Food for Millionaires (Grand Central Publishing, 2007) and Pachinko (Grand Central Publishing, 2017)—“American Hagwon” began with hours (and hours) of meticulous research.

That research takes many forms, including interviews, in which Lee has uncovered invaluable material. “People always disrupt your expectations, which is a great thing,” she says. “I find interpersonal relationships to be so important because we don’t really know each other until we spend time with each other.”

In-person conversations were crucial to Pachinko, the story of a Korean family living in Japan over four generations. Lee wrote the first draft of the novel, destined to be a National Book Award finalist, more than 15 years ago. Dissatisfied with the results, she set it aside until moving to Japan in 2007. There she conducted interviews with Korean Japanese people, which transformed her narrative. The timeline was stretched and details were corrected. Accuracy wins the reader’s trust, Lee notes.

“I’m building a world, and it has to be as real as the world you know. If I get it wrong, the reader won’t stay with me.”

Along with interviews, Lee immerses herself in everyday lives, seeking inspiration and guidance for her fiction in real-life people and situations. While researching Free Food for Millionaires, her debut novel about a young Korean American woman navigating life in Manhattan, Lee applied to Harvard Business School, which allowed her to attend an orientation session for prospective students. In a day of interacting with candidates to attend one of the world’s most prestigious business schools, she noticed a confidence she had never seen before. It was an experience that proved formative for Lee’s fictional creatures of Wall Street.

“All the feelings that I have when I meet people, I try to give to my characters,” she says.

Lee has maintained this approach in her current project. At the Institute, she took advantage of the Radcliffe Research Partnership program, through which students work to expand the scope of fellows’ knowledge. The author’s four undergraduate partners connected with international students at Harvard, asking about their experiences in different educational systems. In the end, Lee gained 40 additional interviews.

Research has made Lee an expert in topics ranging from hagwons to pachinko parlors. But fiction gives her room to explore in ways that nonfiction wouldn’t allow, she says. “You and I talking about [issues] in a political, socioeconomic way is very different than reading fiction,” she says. “I really enjoy the questions that I have. If I didn’t have really interesting, weird questions, I wouldn’t want to write fiction.”

Greenidge, Groff, and Lee agree that they could write more books if not for all the behind-the-scenes work. Although readers might welcome more titles, the authors have no plans to change their ways. Exploring new topics ignites their curiosity and excitement—feelings essential to compelling storytelling. For now, the novelists and Radcliffe fellows are happy to stick to what they don’t know (yet).

Casey Campbell is a senior communications specialist at Radcliffe.