Ruth Bader Ginsburg Tells Young Women: 'Fight For The Things You Care About' 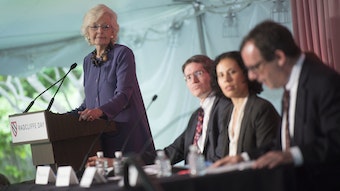 “We are here today to honor how one person—our honoree, Ruth Bader Ginsburg—knocked on closed doors, opened them and held them open for others.”

That's how the Dean of Harvard's Radcliffe Institute for Advanced Study, Lizabeth Cohen, introduced Supreme Court Justice Ruth Bader Ginsburg at a luncheon at Harvard University on May 29. Ginsburg, who was given the Radcliffe Medal, took the stage and had some powerful advice for the young women in the crowd.

“Fight for the things that you care about, but do it in a way that will lead others to join you," the 82-year-old said, in response to a question regarding the advice she would give young women today.

Ginsburg reflected on landmark women's rights cases that she worked on when she first became a Justice in the 1970s. "The object was to get at a stereotype that held women back from doing whatever their talent would allow them to do," she said. "The notion was that there were separate spheres for the sexes. Men were the doers in the world and women were the stay-at-home types."

She later added that now is a better time than any for women to go after what they want. "Young women today have a great advantage, and it is that there are no more closed doors," Ginsburg said. "That was basically what the '70s was all about. Opening doors that had been closed to women."

Thanks for holding those doors open, RBG.