Roberto Zariquiey wants to reframe the discussion around languages with few speakers. 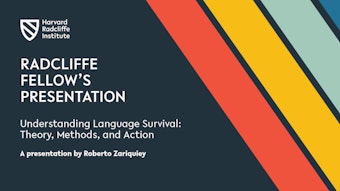 The linguist and 2022–2023 Hilles Bush Fellow Roberto Zariquiey studies Iskonawa, a language with only four living native speakers whose home is in the Peruvian Amazon. When I first sat down with Zariquiey, I thought we would be discussing dying languages, also called obsolescing, moribund, or nearly extinct languages. However, as he explained, this pessimistic framing implies any rare language’s trajectory is irreversible; that it is impossible to revitalize the language. Yet even languages with no living speakers might be brought back if certain conditions are met. “If we have enough data, enough materials, and a community that ethnically identifies with the language, we might revitalize the language,” says Zariquiey.

The death metaphor has already been abandoned for languages with no living speakers, which are no longer called dead languages, but rather dormant or sleeping languages; it’s reasonable and necessary to extend this same approach to languages that are still alive.

We might instead refer to languages like Iskonawa as “surviving” or “resilient” languages to emphasize that, despite modern obstacles, they are still spoken. These languages should be seen and spoken of as miracles rather than tragedies.

Radcliffe Magazine: You’ve said that one of the places where you feel most happy is in the Amazon. Would you describe what makes the Amazon so special to you, and what sparked your interest in linguistics?

Roberto Zariquiey: The first time I went to the Amazon, I was 17 years old, and I went to volunteer in a Shipibo-Konibo community. It was the first time I heard an Indigenous language directly. I played with the kids, swam in the river, went fishing, and played soccer. I shared all these experiences with the Shipibo-Konibo people and learned a little bit of their language, even though I was not thinking about becoming a linguist at that time.

Several years later, when I was a very young lecturer, I met Emilio Estrella, who became like my second father. My father passed away when I was a baby, and with Emilio I learned so much about myself, about the Kakataibo culture, and about linguistics. It was unexplainable love.

Some of my happiest moments were in the Amazon. Talking to people there, learning about linguistics, working on workshops for Indigenous speakers, creating organizations for female artists—doing things that I never expected to do. I became a different person because my perspective on things, the way I decide what I think is fair or unfair, good or bad, is deeply based on my experiences in the Amazon, particularly with Emilio and his family. When I had to choose a career, I decided to pursue linguistics because I found that was a good strategy to have the access to the Amazon. 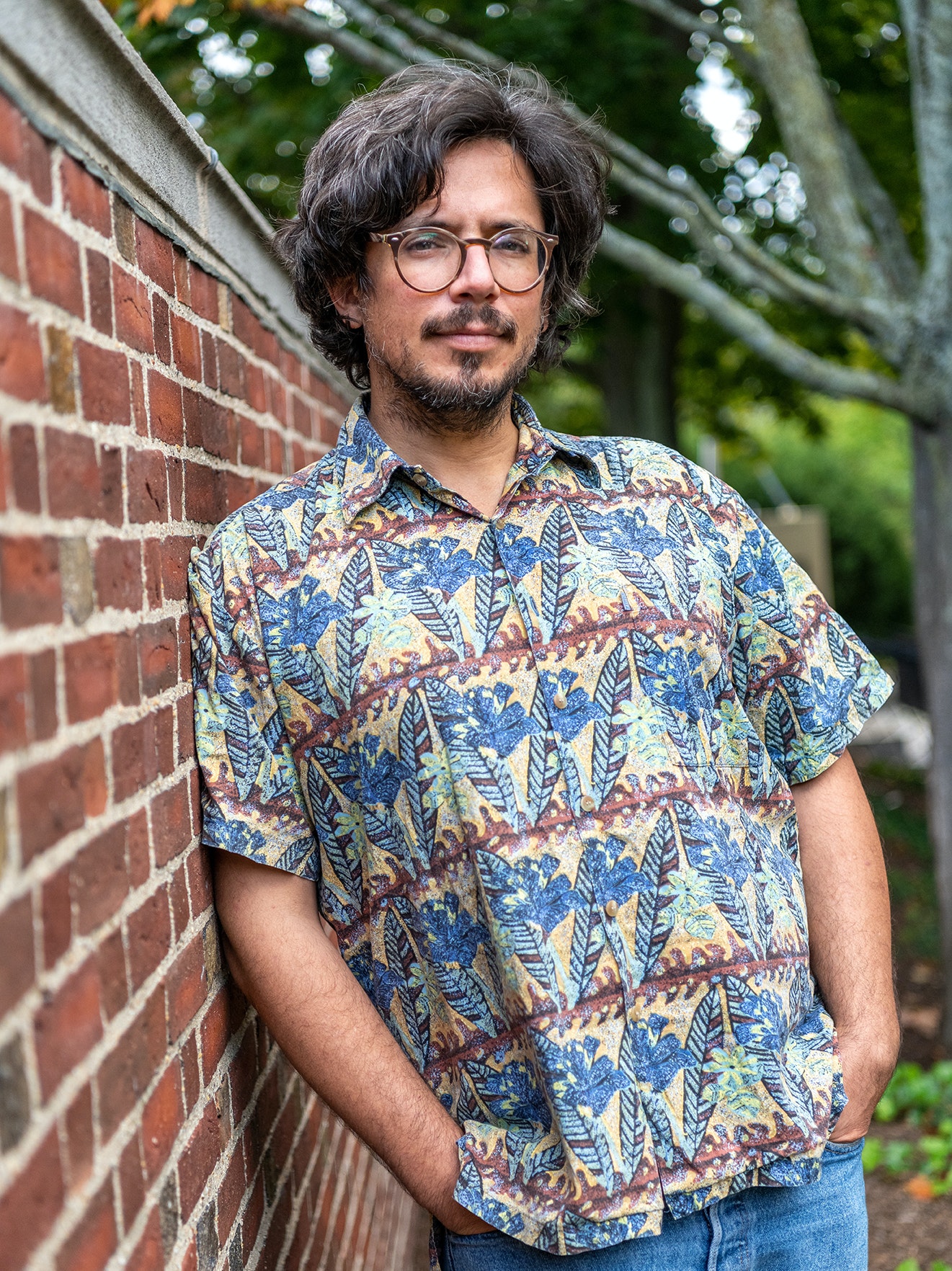 RM: What are some of the challenges of studying a language that has very few speakers?

RZ: When a linguist goes to a linguistically vital community and stays there, they can listen to the language all the time and learn a lot passively. That information will help the linguist build intuitions about the language, learn how to speak the language, and will have a big impact on the analysis of the language’s structure. On the other hand, languages like Iskonawa are not used on a regular basis. So I met and lived with the speakers, but they communicated with me in Shipibo [the dominant Indigenous language in the region] and a little bit of Spanish. So that poses challenges because access to the data is very limited.

In addition, I am working with people who have not used their language for a long time, and they are likely to be very old. So, the data is chaotic, because the speakers don’t remember how to use the language very well, and they mix languages.

Studying Iskonawa poses a particular challenge because Shipibo and Iskonawa are both Panoan languages, which means they share structures, words, and grammatical patterns. Consequently, it was very difficult to tell if someone was talking to me in Iskonawa or in Shipibo.

If surviving languages like Iskonawa disappear, this will have consequences not only for global linguistic diversity, but for Indigenous people. Right now, there are around 200 languages in the world—out of about 7,000 languages—with fewer than 10 speakers. In Peru, there are 10 languages out of 48 with fewer than 10 speakers. Iskonawa has only four speakers who speak it as a first language. Given these statistics, it’s unethical to approach a community with a language in that situation and not try to revitalize it. Yet, the universities and funding sources that support linguistic research don’t value linguistic revitalization in the same way that they value documentation.

RM: What about theoretical challenges? Has studying surviving languages shifted your perspective on linguistics more generally?

RZ: I was trained as a functional linguist. Functionalists believe that the way a language is used impacts the structure of the language. So, what happens when communication is erased from the picture? That question has not been answered yet, but I’m working on it.

My own polemical position is that this hypothesis is not only wrong, it’s unethical. Linguists are basically telling speakers of surviving languages that their languages are messy and don’t have any linguistic value. We need to acknowledge that diversity or that variability as language structure. But the challenge is that we need to rethink some of our very basic postulates about language understood as a system.

“Linguists are basically telling speakers of surviving languages that their languages are messy and don’t have any linguistic value. We need to acknowledge that diversity or that variability as language structure. But the challenge is that we need to rethink some of our very basic postulates about language understood as a system.”

RM: You’ve talked about the importance of giving something back to the groups you study and considering their needs and wants. When working with human subjects in your research, what are some of the most important ethical considerations?

RZ: The most important thing is that we should not be parachute linguists. It’s not enough to satisfy official ethical requirements outlined by universities but then never show up again. Indigenous peoples in countries like Peru are searching for allies. I am a professor at a university, and I need to publish things to keep a record for my own career. I also want to contribute to the body of knowledge about languages in the world. But at the same time, I am fully accessible to the people I collaborate with, and carry out projects that don’t have anything to do with linguistics.

In Peru, collaboration with the Indigenous community is very important. Research questions should be generated through collaborative discussion. We also need Indigenous researchers, and to include Indigenous people as authors of the research that we generate together. Along those same lines, it’s important to include a social component, like language revitalization, in any research project.

We need to make contributions to the communities we study. And it’s important to be transparent throughout the process. We must show the results to the community after the project concludes, acknowledge their ownership of the data they gave us, and ask if they want it to be published or not.

RM: What are some of the strategies you use to revitalize a language? Could you describe the work you do at the Escuelita Iskonawa?

RZ: The Escuelita Iskonawa is like a little school. The children also go to a regular school (a national school), but at the Escuelita, we meet for three days each month with children and their families. One weekend, from Friday to Sunday, we conduct structured and nonstructured learning sessions, and every night, we share dinner.

We teach Iskonawa, but we also teach other subjects, like math, art, and music, because that’s what the parents wanted. We try to create a lot of social interaction around the Escuelita because it’s a community project and the social aspect is as important as the pedagogical one. We try to foster diversity as well, by for example, making the school open to the Shipibo-Konibo children. At the beginning, that was a very difficult decision because the Iskonawa had faced discrimination from the Shipibo-Konibo in the past and didn’t want Shipibo children to attend the school. But eventually, the Iskonawa realized that bringing the children together was a way to break down barriers and avoid discrimination in the future.

To open the school, first, we needed an interdisciplinary team. I am a linguist, but I needed people from the education world—people who know how to conduct a pedagogical session. We also needed technology, and I am part of a research group that develops language technologies for Indigenous languages. We are working on developing digital dictionaries, applications, and some basic Natural Language Processing (NLP) tools. And finally, we needed to have an engaged community. Because we might have very beautiful technology, but we also needed to create spaces for this technology to be used.

RZ: In Peru, there is a strong correlation between being an Indigenous person and being poor and lacking access to basic services. This connection is internalized to the point that people start to think that being Indigenous is in some way wrong. A psychological causative association is established between the economic situation and the fact of being an Indigenous person. As a result, many Indigenous groups think “we should stop living like this, because it is the reason we are undergoing these social and economic challenges; we need to change.” And changing means moving to the cities and changing one’s lifestyle, which has a very strong linguistic component. In Peru, there are very few ethnic communities that have managed to create some sort of balanced bilingualism.

“It would be very difficult to find a situation in which somebody, freely, with all the conditions that one needs to have a good life, decides not to transmit their language.”

RZ: By far, my favorite Iskonawa word is Tamasari, which is the real name of a very old Iskonawa person, who was always called by his nickname, Winikera, by everyone, including anthropologists. One night, he told his wife, Nelita, “You know, woman, Winikera is not my real name; they called me this because I cried too much when I was a kid. My real name is Tamasari. I want you to give that name to Roberto.” I almost cried when Nelita told me that. Now, my soon-to-be-born son’s name will be Francisco Tamasari.

﻿This interview has been edited for clarity and length.

Sam Zuniga-Levy is the communications coordinator at Harvard Radcliffe Institute.