Three headstones in Upham’s Corner shed light on one of the city’s darkest chapters, which Gianna Cacciatore was able to uncover with a summer research grant from the Initiative on Harvard & the Legacy of Slavery.

Gianna Cacciatore ’17, EdM ’18, MTS '22 was stuck in traffic in the asphalt tangles of Upham’s Corner when she discovered forgotten remnants of slavery in her hometown.

At the time, Cacciatore was a ninth-grade English teacher at Brooke High School, a progressive charter school in Dorchester with a predominately Black and brown student population.

“I was working closely with the history teachers, so I was steeped in this curriculum where my students were learning about the history of slavery in the United States and specifically here in Boston,” recalled Cacciatore. “I was learning and reading these materials every day with my students. … I connected what I was teaching to the cemetery and wanted to know more, simply because I was surprised that there wasn’t more written about it already, or a marker or plaque.”

She left Brooke in 2020 and enrolled in the Harvard Divinity School, where she learned about the Harvard & the Legacy of Slavery Student Grant Program, which provides $1,500 stipends to undergraduate and graduate students. Because of her personal interest and curiosity about the cemetery, and having done some research already, Cacciatore jumped at the opportunity.

She began with a Google search, then a search of the Harvard Library online, and then several library visits and phone calls with various scholars. She spoke with someone at the Dorchester Historical Society and learned there that Betty and Cambridge were enslaved by Robert Oliver, a wealthy local businessman who fled his family’s sugar plantations in Antigua in 1736 in response to rumors of an island-wide rebellion. He settled in what is now known as Upham’s Corner with his family and several enslaved people, some of whom built the grand home in which they worked and lived at the intersection of Columbia Road, Massachusetts Avenue, and Boston Street.

Cacciatore pored over documents at the historical society and found “super tangible examples of what enslavement looked like in Oliver’s household.”

Much of this was unsettling, which made her all the more appreciative of the mentorship and support that she received through the grant program. She met regularly with her cohort—a group of students from across the University—who shared research strategies and a passion to learn more about slavery’s legacy at Harvard and beyond.

“This research can be really upsetting. You’re reading about people who were enslaved against their will, who died enslaved, and whose graves have been neglected and not honored in the way they should be through time; wills that list people as property. Being able to share with people doing similar work was really important.”

Cacciatore uncovered receipts, scraps of paper, and several advertisements placed in local newspapers that offered to give away or sell enslaved people. One ad sought the return of a man named George, who had escaped imprisonment after being accused of theft. Oliver’s will listed the names of the enslaved people in his household, with instructions that they be sent to live with his children upon his death. And the 1754 Slave Census listed 18 men and 17 women enslaved in Dorchester, a number some historians suspect to be an undercount as a result of slave owners trying to reduce their tax burdens.

She also found maps of Oliver’s Antigua plantations, which were not far from those owned by Isaac Royall Jr., whose wealth funded the first professorship in law at Harvard. Like Oliver, Royall and other members of his family are buried at the Dorchester North Burying Ground, where a sign, whose simplicity belies their wealth and affluence, marks the Royall Path leading to their grave sites, mere yards from Betty, Bristol, and Cambridge. 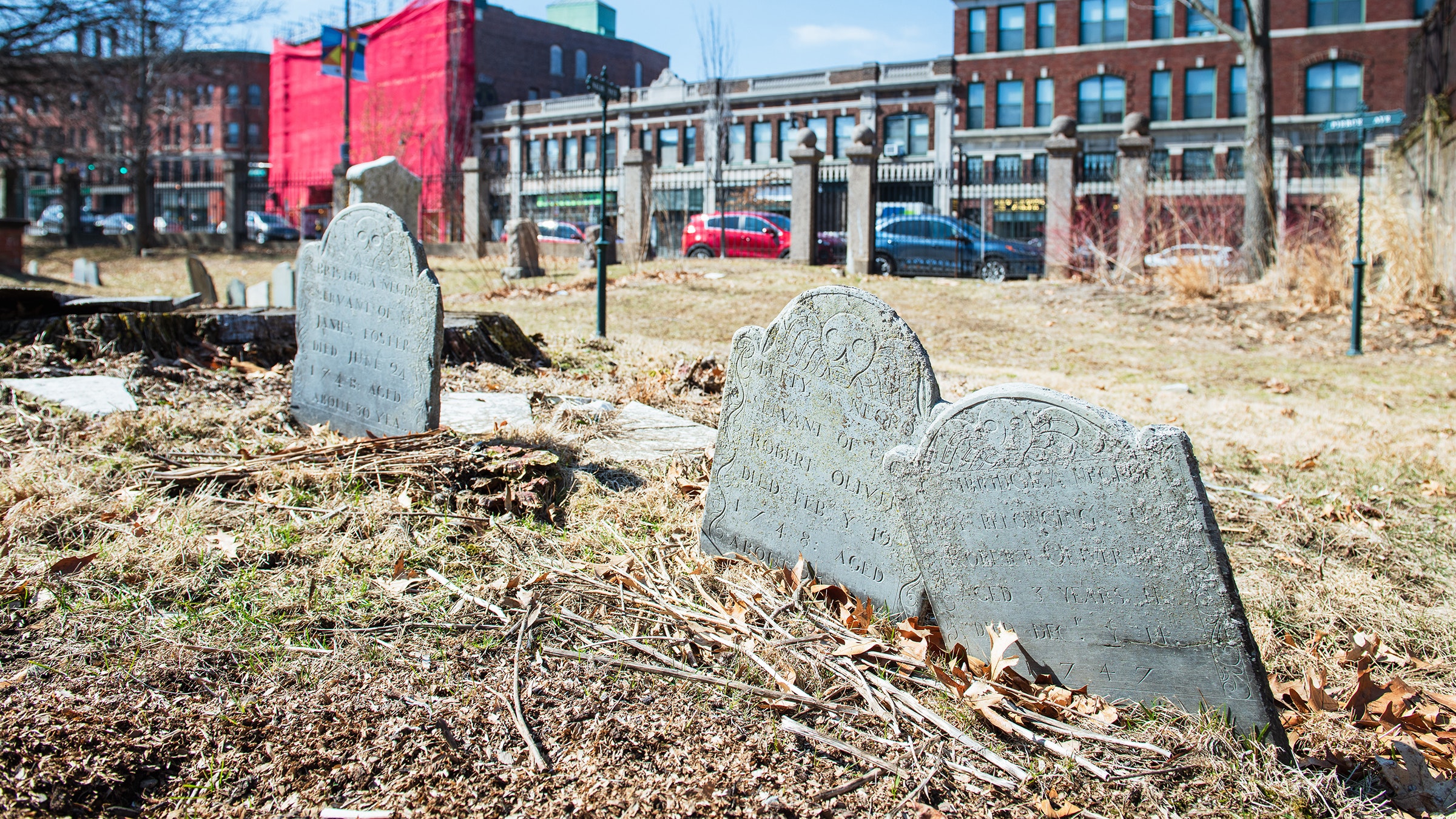 The gravestones of the enslaved individuals (from left to right) Bristol, Betty, and Cambridge can be found in the Dorchester North Burying Ground. Photo by Kevin Grady

“This research really underscores how present slavery was in Boston and how much a part of the daily life of the city it was,” Cacciatore said. “Boston was so small at the time, and 10 percent of the population were free and enslaved Africans in the early 1700s, so I think people have this idea that Boston was a white city or slavery wasn’t a part of our culture in the North and that Boston has always been on the right side of the Civil War, or however you want to put it, but it’s completely wrong,” Cacciatore said. “Slavery has been integral to Boston, and [it] is what brought all of the wealth into this city from the very beginning.”

During the summer of 2016, Cacciatore gave campus tours at Harvard, unaware of the University’s ties to slavery. “I had no idea,” she said. “If someone had asked me about it, I would have been dumbfounded and would not have known what to say."

“I think that context is so important to understanding our country as it is today. You need to know how it’s always been and how it started. You can touch the legacy of slavery on Harvard’s campus and can see it, if you know where to look,” Cacciatore says.

If she were to walk through Harvard Yard today, Cacciatore believes she would view it both as a place of wonder where she has fond memories of her undergraduate years and as one of historical weight and importance.

Cacciatore, whose research inspired her to pen an op-ed that was published in the Boston Globe, believes that the Harvard & the Legacy of Slavery initiative is an important and necessary enterprise. She hopes it will broaden Americans’ knowledge of this period in history and help the Harvard community and the world understand the injustices people of color experienced then—and still face now.

She says she regrets that it took her this long to understand. Her high school did not teach the history of slavery and its legacies in depth. In stark contrast, Brooke students learn about this legacy as well as African Americans’ battle for basic civil rights and Boston’s own school busing controversy.

“If you talk to an adult about slavery or racism in the United States, there’s sometimes a reluctance to accept history, whereas with my students, there was this clear understanding that these things are connected … to the world that we live in today,” she said.

These days, Cacciatore takes the subway to work at her job as a communications professional at a local nonprofit and is still very committed to learning much more about slavery in Massachusetts. She stops to read every plaque that she would not have noticed before. During drives to the beach that take her through the coastal town of Hingham’s Main Street, once decreed the nation’s most beautiful main street by First Lady Eleanor Roosevelt, Cacciatore says, “I think, How many of these houses were built by enslaved people? That will be my next project.”

As for the upcoming release of the Harvard & the Legacy of Slavery report, she added, “So much time and important research went into it, and so many pieces of history will be aired for the first time that will spark a lot of conversation. And it’s going to be good.”