Radcliffe's 2018 gender conference explored how gender is essential to our understandings of citizenship at the local, national, and global levels. 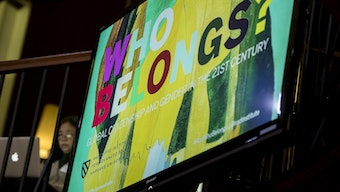 Play video
Who Belongs? Global Citizenship and Gender in the 21st Century The Power of Fear

Citizenship means more than just formal membership in nation-states; it means belonging in communities, which are defined in part by gender. Participants in Radcliffe’s 2018 Gender Conference explored these themes through an evening focused on film and citizenship, three panels, and a keynote conversation with the Pulitzer prize-winning author Jhumpa Lahiri.

Advances in communication, travel, technology, trade, and energy, and the ﬂow of ideas across borders, have unquestionably made our planet seem smaller, prompting some in a position to take advantage of those breakthroughs to think of themselves as “citizens of the world.” But issues raised at Radcliffe’s annual gender conference, this year titled “Who Belongs? Global Citizenship and Gender in the 21st Century,” under-scored the extent to which the privileges and protections of national citizenship still profoundly inﬂuence the well-being and basic survival of much of the world’s population.

“With more than 65 million people displaced from their homes, and with nationalism on the rise, citizenship has taken on even greater salience in our current moment,” said then-Dean Lizabeth Cohen in her introduction to the April gathering. Throughout the day, presenters considered how politics, racism, domestic violence, religious and cultural bigotry, poverty, and immigration and asylum are spheres where, in Cohen’s words, “gender intersects with citizenship in tangible ways.”

The conference was organized as part of Radcliffe’s two-year Institute-wide thematic focus on citizenship, and Cohen emphasized that “the link between gender and the rights and obligations of citizenship is hardly a settled issue.” Daniel Carpenter, the conference planning committee chair and faculty director of Radcliffe’s social sciences program, noted the inﬂuence of both “written and unwritten rules” in determining citizenship. Some imperatives are codiﬁed by law, he said, while others “are part of the fabric of our life but are less visible and sometimes entirely invisible.

The Washington Post columnist E.J. Dionne Jr. talked about an increasingly important unwritten factor in determining the sense of belonging and agency in the United States. “Socioeconomic status and growing income inequality are powerful forces shaping the contours of American society and politics,” said Dionne, a senior fellow at the Brookings Institution, a Georgetown University professor, and the William H. Bloomberg Visiting Professor at Harvard Divinity School. The persistent gender wage gap in the United States and women’s economic vulnerability compound the effects of other obstacles to political access and power, he observed.

Turning to immigration, the Boston College Law School professor Kari E. Hong categorized the Trump administration’s actions to block asylum seekers as “an attempt to weaponize misery.” Hong said the most shocking example is the tactic of forcibly separating children from their asylum-seeking parents in detention centers without adjudication at US border entry points.

Such practices, she stressed, are in keeping with “a 20-year attack on asylum” in the United States, where, since 1996, immigration oﬃcers have had the authority to deport certain undocumented noncitizens through a process called expedited removal. Of the 5.5 million people deported between 1996 and 2016, Hong noted, “4.2 million . . . were turned away by one immigration oﬃcer without a lawyer and without an appeal.”

“The rule of law, when it comes to citizenship, has always been a moving target,” commented the Johns Hopkins University legal and cultural historian Martha S. Jones. Inconsistent, politically driven interpretations of US citizenship have arisen over the years in part, she said, “because citizenship was ill-deﬁned” in our founding Constitution.

Race and gender were central and divisive issues in Reconstruction-era legislation that sought to codify citizenship rights, Jones noted. White abolitionist and women’s rights leaders such as Susan B. Anthony and Elizabeth Cady Stanton were in favor of the 14th Amendment’s guarantee of citizenship for freed slaves. But they notably parted ways with the African American abolitionist, suﬀragist, and poet Frances Ellen Watkins Harper, who supported the 15th Amendment—which granted voting rights to African American men—despite its failure to do the same for white (or African American) women. “In this country,” Jones observed, “thorny, complicated texture questions around citizenship are nothing new.”

The Road to Being Heard

For women to gain and exercise citizenship rights, their voices must be heard. More women have achieved leadership positions in recent years, but not nearly enough to constitute a critical mass, according to research by the Princeton University professor Tali Mendelberg. Sharing the results of a study that simulated women’s participation in decision-making groups such as legislatures and corporate boards, Mendelberg revealed that men’s opinions and priorities pre-vail until women reach a “supermajority” of 80 percent. Unfortunately, she observed, “the road to female supermajority in places of power is very long and painfully slow.”

Slow progress is better than no progress, especially in the Middle East and North Africa, where Sarah Leah Whitson serves as executive director for Human Rights Watch. In Lebanon and Indonesia, she noted, laws that permitted rapists to avoid jail if they married their victims were recently struck down, and Tunisia has become the eighth country in the region to allow women to pass nationality to their children at birth.

In Saudi Arabia, women may now drive cars, and some provisions of the entrenched system that requires women to have male guardians approve critical decisions on their behalf are falling away. Human Rights Watch partnered closely with Saudi women activists to produce a 2016 video and social media campaign that featured direct testimonials from Saudi women about the negative impact of the guardianship system on their lives. “The videos garnered 2.5 million views on Facebook,” said Whitson, who believes that further advances will be made in the region “as women redeﬁne their status as citizens, not subjects.”

Through different lenses, the Turkish sociologist Nilüfer Göle and the Pulitzer Prize–winning novelist Jhumpa Lahiri considered the concept of national identity for women whose lives traverse cultural and national boundaries.

Göle, a professor at l’École des Hautes Études en Sciences Sociales, raised the question of whether “we need to share the same norms in order to belong.” The complexity of the issue for minority women can be seen in the experience of the daughters of Muslim immigrants in Europe, who embrace their French, Italian, or German birthright but also choose to wear the hijab at school or at work. Göle said these young women are often perceived by Europeans “as being aggressive, political, and ideological” because their decision to cover their bodies “questions the secular, feminist way of emancipation.”

The Interpreter of Maladies (Houghton Miﬄin, 1999) and The Namesake (Houghton Miﬄin, 2005), Lahiri offered a reading of her recently published short story “The Boundary.” The story raises themes such as violence against immigrants, the toll that displacement takes on family relationships, and the sense of being suspended between cultures.

In a conversation with the best-selling author Celeste Ng, which followed the reading, Lahiri, who was born in England to Bengali parents who subsequently emigrated to the United States, revealed that the pull of conﬂicting cultural inﬂuences in her childhood kept her from developing a sense of national identity. “My mother lives in Rhode Island, but she feels Indian, and nothing will make her not feel that way—that is identity,” Lahiri stated, adding, “I don’t have that.”

Although, she said, the absence of “a feeling of being this or being that,” has at times been “a source of anguish,” Lahiri nevertheless believes that ideally, “the writer should have no identity whatsoever. It is what allows you to think your way, feel your way, and understand your way into other hearts, other souls.”

“This is not the America I know” is a complaint the University of Cincinnati nationalism scholar Rina Verma Williams has heard increasingly from those with widely divergent opinions about immigration and US citizenship as the country approaches what she termed “a tipping point in becoming a majority minority nation.” One of several speakers who addressed the global rise of nationalism, Williams sees growing tension in the United States between those who embrace civic nationalism—based on shared loyalties and beliefs—and those who sub-scribe to an ethnic national-ism, driven by the conviction that sociocultural loyalties and bloodlines determine who belongs.

The Harvard professor, CNN political analyst, and former White House advisor David Gergen noted that “pushback against immigrants and refugees can take forms that hinder efforts to empower women and ensure gender equality.” The Hastings College of Law professor Joan Williams said many white rural and Rust Belt women voted for Donald Trump in 2016 despite his aﬀronts to gender equality because his America- ﬁrst rhetoric and anti- immigration stance resonated with their sense that globalists and elites with cosmopolitan attitudes about citizenship are threatening local economic and social networks that have long de-ﬁned their sense of American pride. “To them,” Williams said, “talk of open borders shows a shocking and hurtful lack of social solidarity.”

The Harvard professor and former UN ambassador Samantha Power said political polarization has reached such a virulent pitch in the United States that it affects our beliefs not only about who belongs in our country, but also about who belongs in our families. Republicans and Democrats have made signiﬁcant progress toward consensus on favoring interracial and same-sex marriage in recent decades, she said, but a 2010 Pew Research poll indicated that 49 percent of Republicans and 33 percent of Democrats “would be upset if their child married someone in the other political party”—versus just 5 percent of Americans who felt that way in 1960.

Power also noted a 2017 Pew poll revealing that only 9 percent of Republicans and 8 percent of Democrats had themselves married outside their political party. “It’s extremely important to think about this,” she stressed, “as we consider the future of this country and the future of democracy, pluralism, and inclusion around the world.”

Deborah Blagg is a freelance writer.