Syjuco's work is much informed by the country of his birth. "I'm nothing but Filipino." Photo by John Goodman

Miguel Syjuco isn’t just writing characters—he’s writing a world. In its pursuit, he explored the history of his native Philippines. And then he embellished quite a bit.

It all began with a fictional novelist, Crispin Salvador, whose body turns up drowned in the Hudson at the beginning of Syjuco’s debut novel, Ilustrado (Farrar, Straus and Giroux, 2010). The book starts in familiar, albeit footnoted, first person, but the reader is soon plunged into format changes that indicate concurrent alternative narratives, literary excerpts in a number of genres, and Internet comment exchanges in their own millennial patois. There’s an unreliable narrator called Miguel Syjuco, there’s mystery, there’s scandal, there’s ennui—there’s a twist. Stick around, dear reader, you’re in for a ride.

That ambitious work—called “confident and quirky,” “dazzling and virtuosic” in the press—began as the thesis for Syjuco’s Columbia University MFA, and it earned him the 2008 Man Asian Literary Prize while still in manuscript.

Syjuco, born to some privilege in Manila, is officially an expat. He has spent the past 12 years living in such places as Adelaide (Australia), New York City, and Montreal and has become intimately acquainted with Hong Kong and Singapore. He’d love to expand that list to include several iconic cities in Europe; he references Milan Kundera’s characterization of the Continent as “maximum diversity in minimum space.” And he has a long list of other places he’d like to call home. “But I’m not that old yet,” he jokes. “I think if I make the necessary sacriﬁces and I work hard enough, I can do it.”

Yet Syjuco’s work is much informed by the country of his birth. “I’m nothing but Filipino,” he says. He acknowledges the problems, endemic to many developing nations, that trouble the Philippines: poverty, corruption, and class tensions, all of which show up in Ilustrado. This has made the book, now translated into more than 15 languages, relatable in India and Latin America, other places that bear the scars of colonialism. “I see the third world as one place that’s kind of spread around the planet,” Syjuco says.

Still, he believes that living abroad provides a critical distance that is absolutely necessary to his personal view of the world as well as to his work. That distance has resparked his interest in Philippine history and politics: he often writes opinion pieces in the British and North American media about Philippine current events. And it has been a boon to his ﬁction. “By putting distance—whether geographical or ﬁgurative or fictional distance—I feel like I’m empowered to do a lot more with satire and parody than I could if I was dealing with nonfiction or living in the Philippines,” he says. “I can tell the truth about people because, well, they can’t reach me.”

As well received as it was, Ilustrado did elicit some responses that have urged Syjuco to go in a slightly different direction with his second novel. Readers had bones to pick with him over, for example, the exact nomenclature of the Philippines’ legislative system and whether a certain bridge over the Pasig River actually floods. “They get stuck on these things,” he says, “and they use that to reject the bigger issues that I try to get at in the book—I wanted to get away from that. Because ultimately, the book isn’t about those facts.”

Syjuco continues his deep dive into corruption and social issues in his next effort and has decided to shake things up a bit. Although I Was the President’s Mistress!! (Farrar, Straus and Giroux, forthcoming) takes place in a fictional society modeled after the Philippines, he never mentions Manila or Tagalog, as he does in Ilustrado. The action also draws inspiration from Greece, India, and Mexico.

I Was the President’s Mistress!! begins with a scandal familiar to readers of Ilustrado: “Sexy-Sexygate.” At the center of that scandal is Vita Nova, a starlet engaged in an extramarital affair with President Fernando Valdez Estregan. When she is caught trying to uncover his suspected embezzlement, she fears for her life and goes public. Told in transcripts from interviews with Vita and her 12 lovers dating back to high school, this is a deconstructed novel. “I wanted to enlist the reader,” Syjuco says.

The novel tackles issues such as reproductive health, gender relations and roles, religion and its influence on public policy, pornography, sex in general, and celebrity—in 13 different voices, each with its own angle and representing a facet of the developing society. In order to approximate how people really speak, Syjuco sneaks in slang, glam-rock lyrics, indirect Deepak Chopra references, and a generous sprinkling of likes: “I’m trying to write literary prose in a very colloquial way,” he says, “without it being too much like a parlor trick of ventriloquism.”

It’s a challenge he’s enjoyed, and one that has required him to indulge in “lots of tabloids, lots of cheesy love songs.” He admits to a soft spot for low culture, including Internet message boards, saying, “I don’t know why I’m so addicted to them.” Of course all are in service to filling out his world and depicting his featured character, Vita Nova.

The audacious Vita Nova was first introduced in Ilustrado. She bursts onto Syjuco’s fictional scene with her song “Mr. Sexy-Sexy” and its very popular accompanying dance. From there, she becomes a “bold star” in the movies by taking off her clothes, and her fame quickly rises. Syjuco sees her as an archetypal character, especially in the Philippines: the shrewd young thing who claws her way out of poverty and obscurity with the help of stunning looks and moderate talent. Syjuco points out that entertainment is seen as a stepping-stone in his home country—many Philippine politicians got their start that way, and so did his fictional president.

Syjuco has had a lot of fun constructing Vita’s career: He’s written lyrics for several songs, choreographed the dance that catapults her to fame, named the various movies in her oeuvre. Vita even has a real presence on Facebook—and she is the “creator” of the Miguel Syjuco FanShrine (www.miguelsyjuco.com). 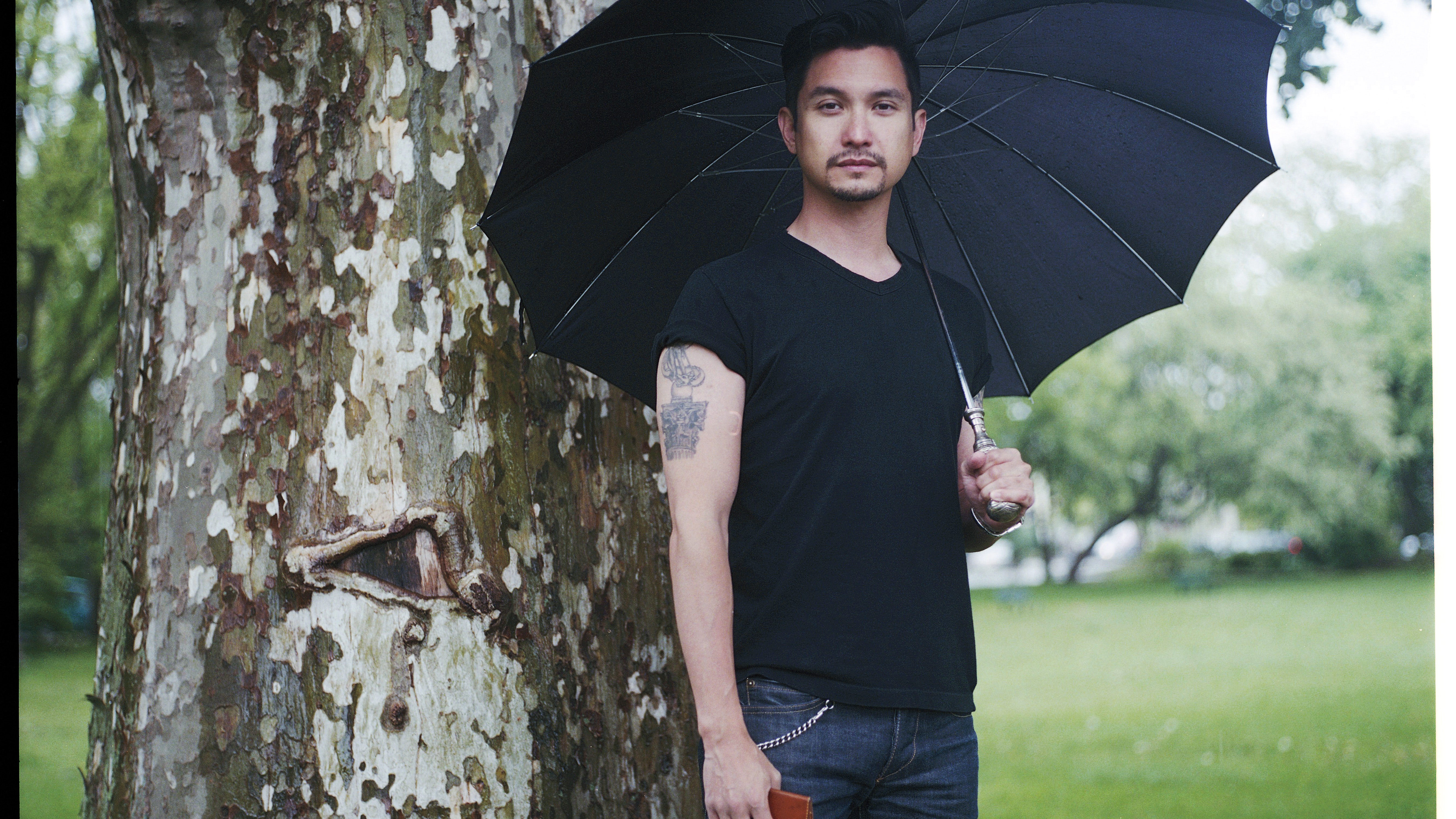 Inspiration can strike anywhere, so Syjuco carries a little leather-bound notebook in which to jot his thoughts. Photo by John Goodman

Indiana Seresin ’15, a joint concentrator in literature and the studies of women, gender, and sexuality, is assisting Syjuco as a Radcliffe Research Partner this year. Her own nonfiction writing, published in campus periodicals such as the Harvard Advocate and Manifesta, employs what she characterizes as “a lyrical literary prose.” Seresin has written about terrorism, state propaganda, and feminism—all issues present in Syjuco’s fictional society. “I wanted to work with a novelist, and he’s really interested in the things that I study,” she says. “It was kind of a perfect union.”

In the fall, Seresin and two other Research Partners, Mercedes Flowers ’16 and Rosie Putnam ’15, carried out research projects on topics that turn up in President’s Mistress, such as microlending and reproductive rights in the third world. Now that Syjuco has completed the manuscript, they’ve been his first readers. “I think my role specifically has been responding to the more contentious issues to do with gender and sexuality and giving him advice,” Seresin says. “The things that come up are potentially controversial.”

Syjuco hints that some of his characters are far from politically correct: they’re crude or misogynistic, traits anathema to Syjuco himself. But, the writer points out, he’s not interested in producing agitprop. “It’s not propaganda, but it should be more than a great story,” he says. “Everything I do is in service to and as a result of my interest in equality.”

Seresin agrees. “Writing an intentionally feminist-friendly book is totally different than writing from a feminist perspective,” she says. “It’s a very difficult line to tread.”

Now that Syjuco has moved on to the editing phase of President’s Mistress, he’s looking forward to his next book, for which he has just started the research. Whereas Ilustrado covers the past by reaching 150 years back into Philippine history, President’s Mistress is based on the Philippines of the present. “My third book, Lichtenberg, is about the future of this fictional third-world country that I’m developing, and how it wrestles with climate-related change,” he says. It will complete the trilogy inspired by the Philippines.

Syjuco cites the denial of climate change—or even suppression of the subject—that especially threatens developing island nations. He envisions his protagonist as someone who is politically and economically powerful yet unable to effect change. “For me it’s a thought experiment in which I’m trying to figure out what the forces are against the change that everybody knows is necessary,” he says. “So if you’ve got a character who’s got all the power, what are the forces acting against him or her?”

Starting on the Future

Syjuco doesn’t know yet which in his long list of cities will host the writing of that next book. In the meantime, he’ll move ahead with the finishing touches on President’s Mistress—“I can see the summit, and it feels good”—and continue the journalism and editorial work he does when not writing fiction. As he looks forward to returning to that hustle, he’s especially grateful to Radcliffe for providing an entire year during which he could focus on his novel, calling the Institute “a lifeline.” “In terms of giving me a space to work and a support group and the influence of other people’s perspectives and their work . . . priceless is a cliché, but that’s really what it’s been,” he says. “I also count myself very lucky that I’ve got a two-book deal and that I have readers who are interested in my next book.”

Gratitude aside, Syjuco has one wish: “I’d like to become famous enough that everyone knows how to pronounce my name.” (For the record, it’s “see-WHO-ko.” And he’s got a pretty good start.)