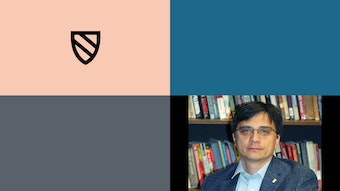 Play video
The Popularization of Doubt: Scientific Literacy and Alternative Forms of Knowledge in the Soviet Union after World War II A Fact is No Match for a Martian Summer of X

Alexey Golubev is an assistant professor of Russian history and digital humanities at the University of Houston. His research interests lie in understanding the historical experience of 20th-century Russia and other socialist and post-socialist societies in the context of global modernity.

While at Radcliffe, Golubev is working on a new book project: a history of Soviet efforts to produce mass scientific literacy after World War II, when tens and later hundreds of thousands of members of the Soviet intelligentsia were recruited to communicate scientific knowledge to the public through popular science lectures, publications, public experiments and debates, and television shows. This mass scientific literacy campaign resulted in a diverse and autonomous network of people and ideas in the late Soviet Union that was only superficially controlled by the state, and it eventually undermined the public trust in officially sanctioned knowledge. As a result, this project is also an inquiry into a pressing social question, especially in the age of COVID-19, of why mistrust of science remains a persistent feature in modern societies.

Golubev’s most recent publication is The Things of Life: Materiality in Late Soviet Russia (Cornell University Press, 2020), about the impact of materiality on the organization of the Soviet social life during the late socialist era. He is also a coauthor of The Search for a Socialist El Dorado: Finnish Immigration to Soviet Karelia from the United States and Canada in the 1930s (Michigan State University Press, 2014). Golubev earned his PhD from the University of British Columbia.