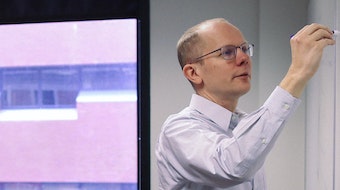 Paul Martini is a professor in the Department of Astronomy and member of the Center for Cosmology and AstroParticle Physics at the Ohio State University. Martini’s research includes building instrumentation for telescopes and the analysis of their data to answer fundamental questions in astrophysics and cosmology. Martini is presently the instrument scientist for the Dark Energy Spectroscopic Instrument (DESI), which is poised to begin the largest spectroscopic survey of the sky ever conducted.

During his year at Radcliffe, Martini is working on analysis tools and data from DESI to address the mystery of cosmic acceleration. The most prevalent view is that cosmic acceleration is due to some negative pressure associated with the vacuum of space, which is commonly referred to as dark energy. Other hypotheses include a modification to the theory of gravity, that is Einstein’s general theory of relativity, and an additional, scalar field that would act like an extra force of nature.

Martini has been a faculty member at Ohio State since 2005, and he was a visiting professor at the University of Virginia and visiting astronomer at the National Radio Astronomy Observatory in 2012–2013. Prior to joining Ohio State, he was a Clay Fellow at the Harvard-Smithsonian Center for Astrophysics and a Carnegie Starr Fellow at the Observatories of the Carnegie Institution for Science. Martini earned his PhD in the Department of Astronomy at the Ohio State University.