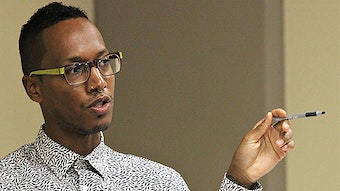 Uri McMillan is a performance historian at UCLA, where he is an associate professor in the Departments of African American Studies, of English, and of Gender Studies. His research—a synthesis of art history and visual culture, feminist theory, performance studies, and Black diaspora studies—is primarily centered on African diasporic artistic production, with a particular focus on aesthetic and performance cultures.

As the Walter Jackson Bate Fellow, McMillan is completing “Airbrush, Instamatics, and Funk: Art, Pop, and New York City’s Long 1970s.” In this dynamic cultural history, he traces a network of select New York City–based artists who restlessly and promiscuously moved across fields of cultural production in dual efforts: to creatively explore new aesthetic forms and melt the edges between seemingly disparate mediums and disciplines.

McMillan holds a PhD in American studies and African American studies from Yale University. He is the author of Embodied Avatars: Genealogies of Black Feminist Art and Performance (NYU Press, 2015), which was awarded the William Sanders Scarborough Prize from the Modern Language Association and the Barnard Hewitt Award for Outstanding Research in Theatre History and Errol Hill Award from the American Society for Theatre Research. McMillan’s essays and interviews have appeared in Aperture, ASAP/Journal, The Routledge Companion to African American Art History (Routledge, 2019), GLQ, and Women & Performance: a journal of feminist theory. His work is also featured in museum-based publications for the Brooklyn Museum, MCA Chicago, and the Studio Museum in Harlem.