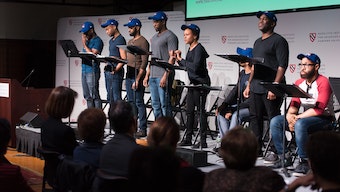 Over the past four decades, the phrase “Title IX” has become practically synonymous with women’s sports. The events leading up to Title IX’s passage in 1972 and the struggle ever since to figure out how to implement the law fairly demonstrate how athletics became part of the broader political and cultural struggles of contemporary American life. The history of Title IX also confirms the difficulties—and the rewards—of putting abstract principles like equal opportunity and gender equity into concrete, everyday practice. Do women and girls enjoy more equitable access to sports than they did 45 years ago? Absolutely. Have they reached athletic parity with men? Definitely not.

The key provision of Title IX is only 37 words long, but from the start, it sparked high expectations as well as conflict and ambiguity—all of which continue to this day. Legislators originally conceived the law as a general tool to combat sex discrimination in educational institutions but failed to grasp its potentially revolutionary impact on athletics. Over the years, Title IX has continued to evolve. Today, it is an effective but often controversial tool on campus for mobilizing against sexual harassment and violence against women—another outcome not anticipated by its original sponsors.

The 45 years that Title IX has been in effect has been a period of enormous change in women’s (and men’s) lives, on and off the playing field. The women’s sports revolution is here to stay, but gender equity in education and society in general is still incomplete. Title IX remains an important tool in the ongoing struggle.

For most of American history, sports have been a male preserve. Competitive athletics were seen as natural for men, but somehow unnatural for women. Girls were supposed to be graceful and attractive, not sweaty and disheveled. That disapproval never stopped girls and women from embracing the joys of physical activity, either recreational or competitive, but they played sports according to different rules, wearing different outfits—who can forget the dreadful one-piece gym suits with snaps?—and enjoying very little support. That was just the way things were until Title IX and the revival of feminism changed the rules of the game. 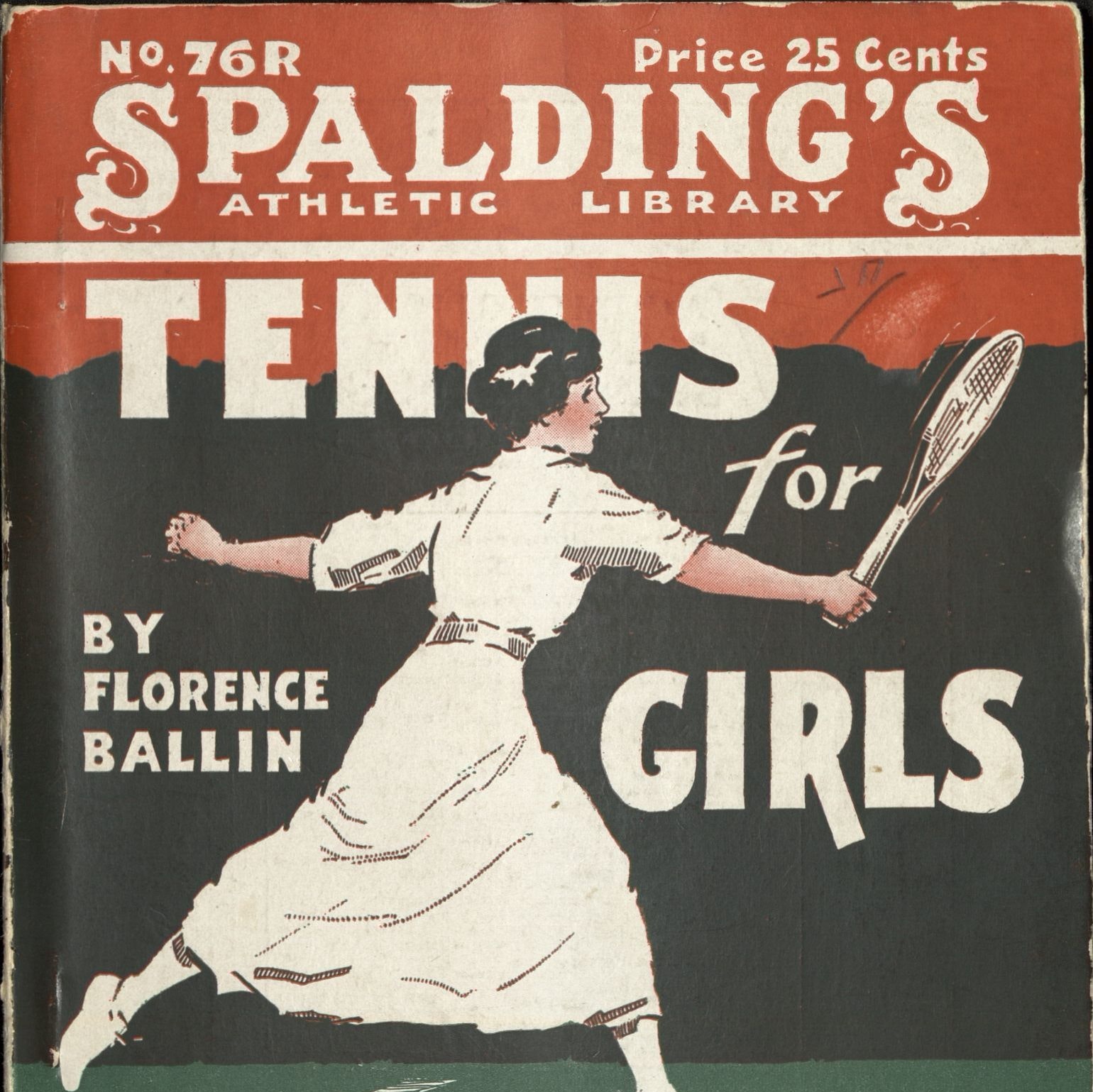 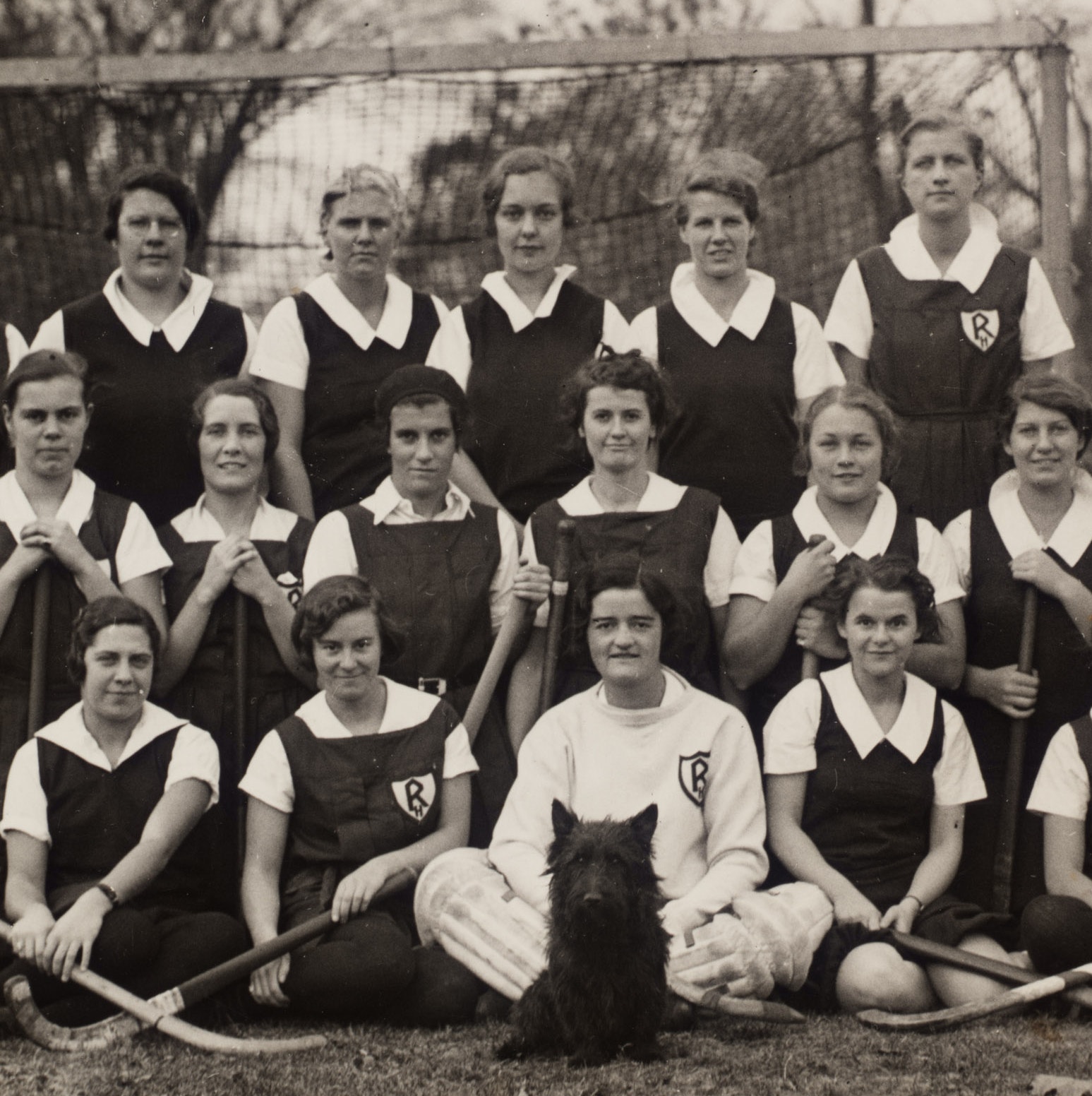 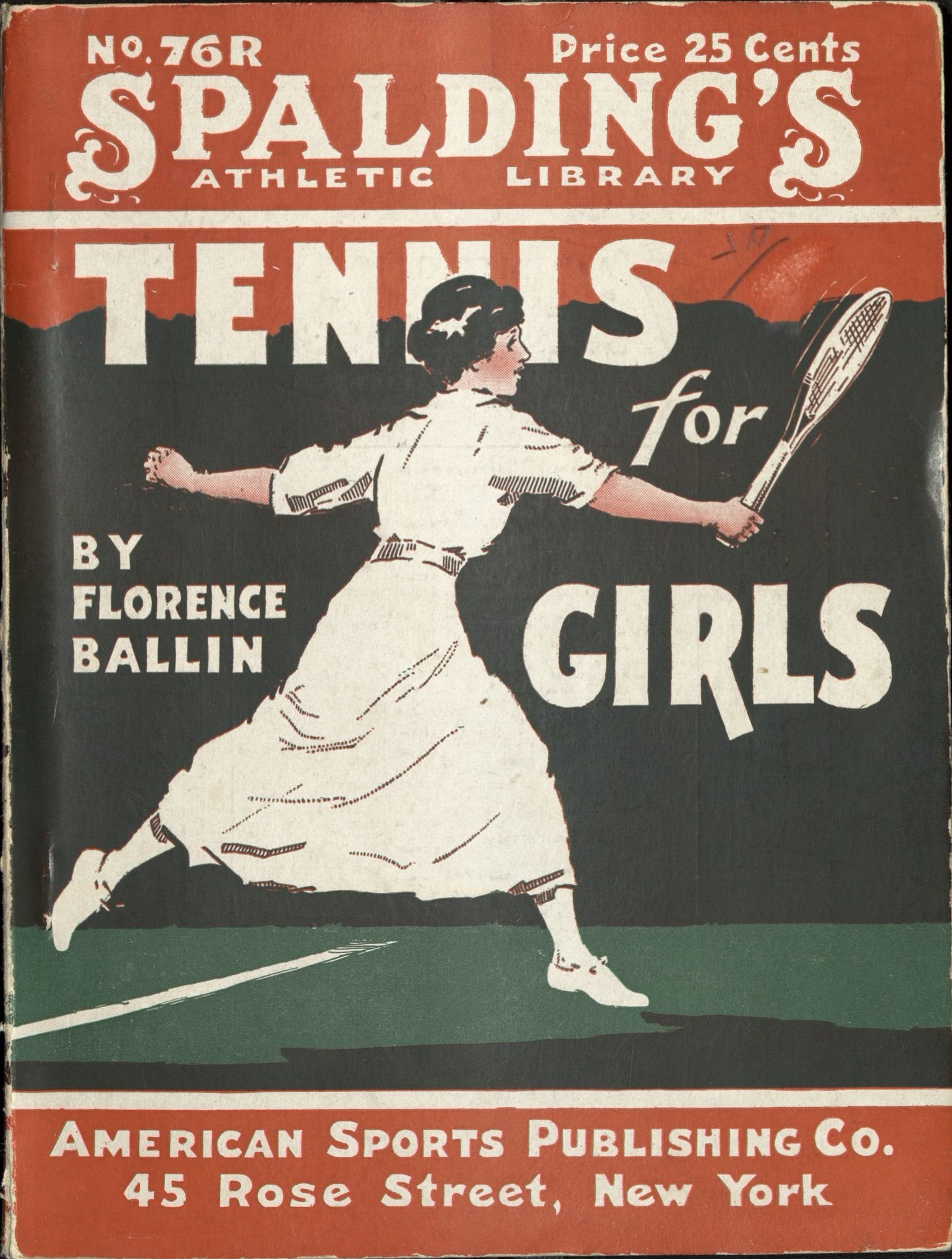 Tennis for Girls by Florence A. Ballin, part of Spalding's Athletic Library, 1924. Courtesy of Schlesinger Library 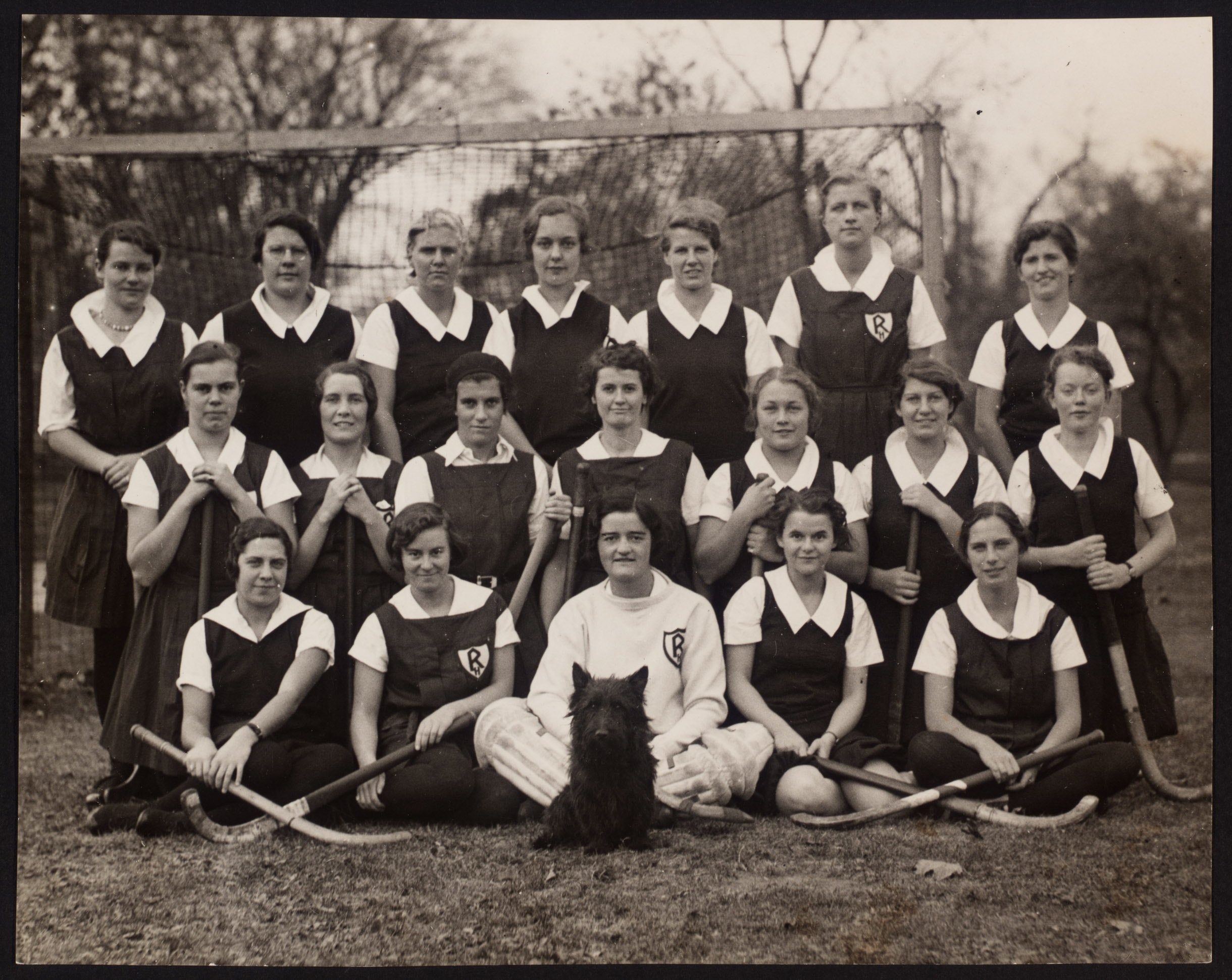 The Early Years of Title IX

When President Richard Nixon signed the Education Amendments Act of 1972 containing Title IX, no one realized that its most far-reaching impact would be on sports. But the disparities were too striking to ignore. For example, in 1973–1974, the University of Washington’s men’s teams had a budget of $2.5 million, while the school’s women’s teams received only $18,000. Government bureaucrats and school administrators dragged their feet as they struggled to figure out what equal athletic opportunity meant in terms of funding, access, and support. Finally they began to get the message: if schools were going to give out jock straps to the men, then they should provide sports bras for the women. 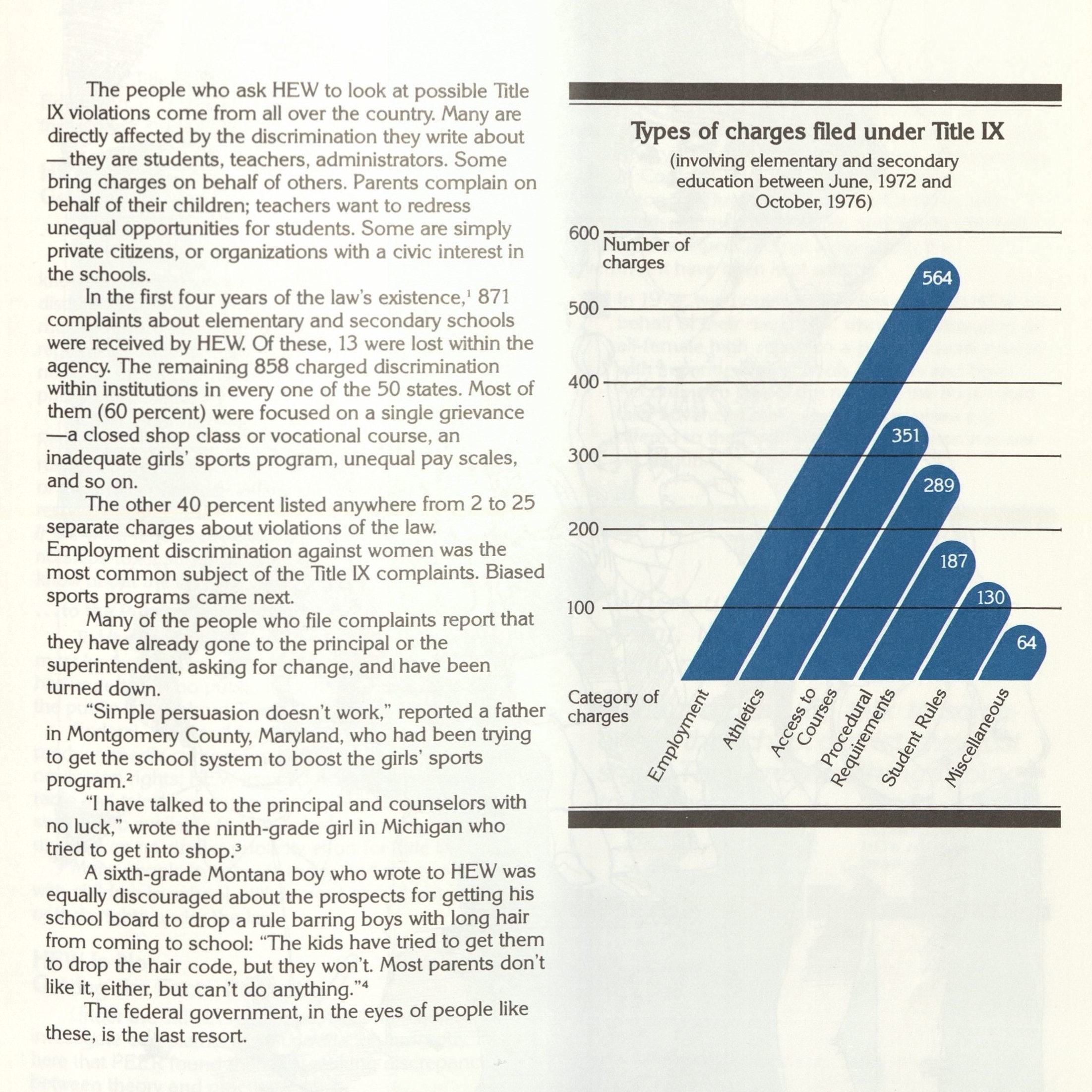 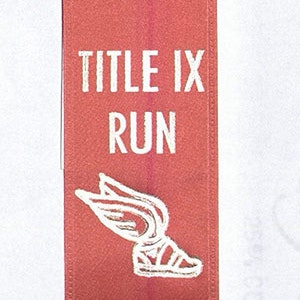 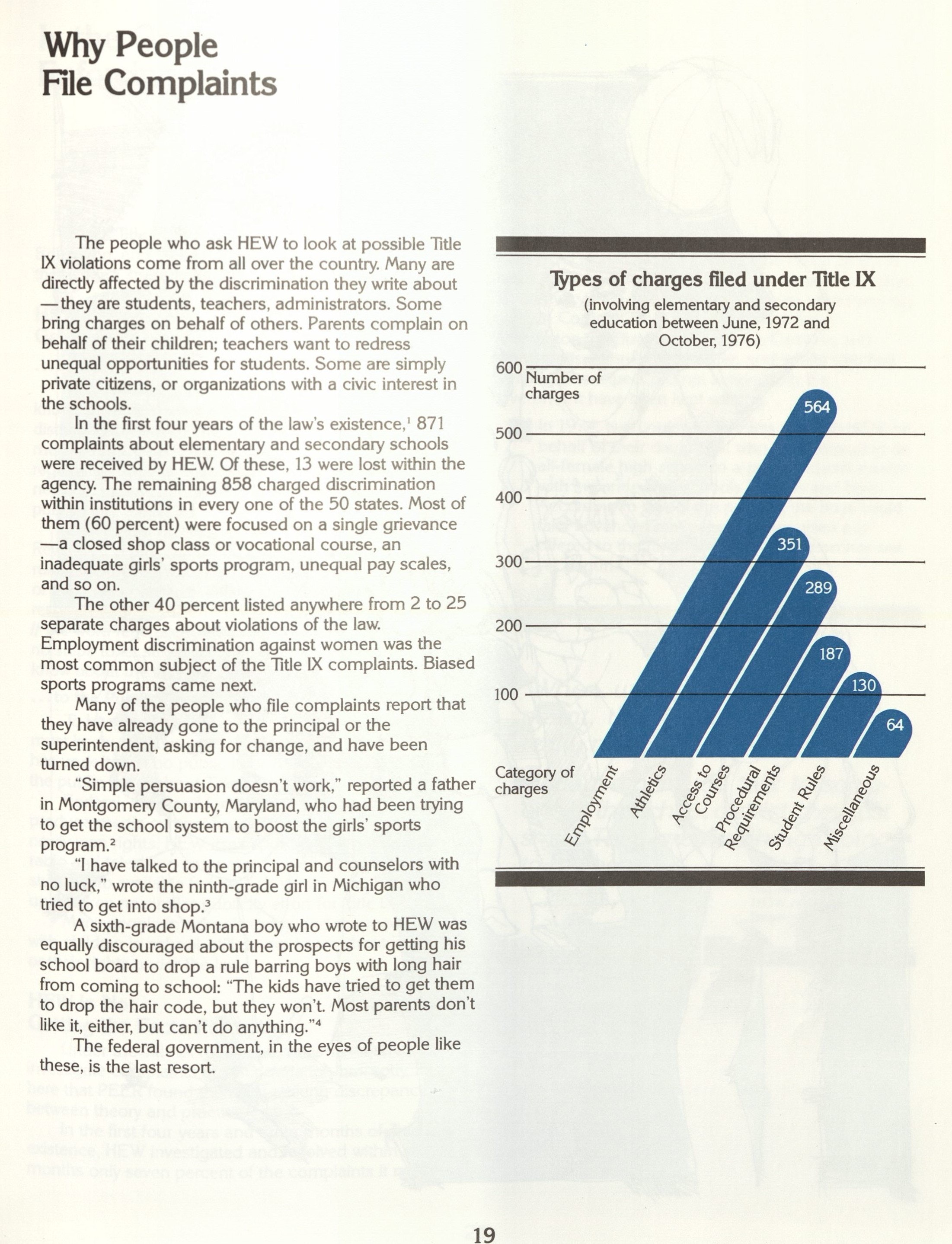 From Stalled at the Start: Government Action on Sex Bias in the Schools, published by the Project on Equal Education Rights, NOW Legal Defense and Education Fund, 1978. Courtesy of Schlesinger Library 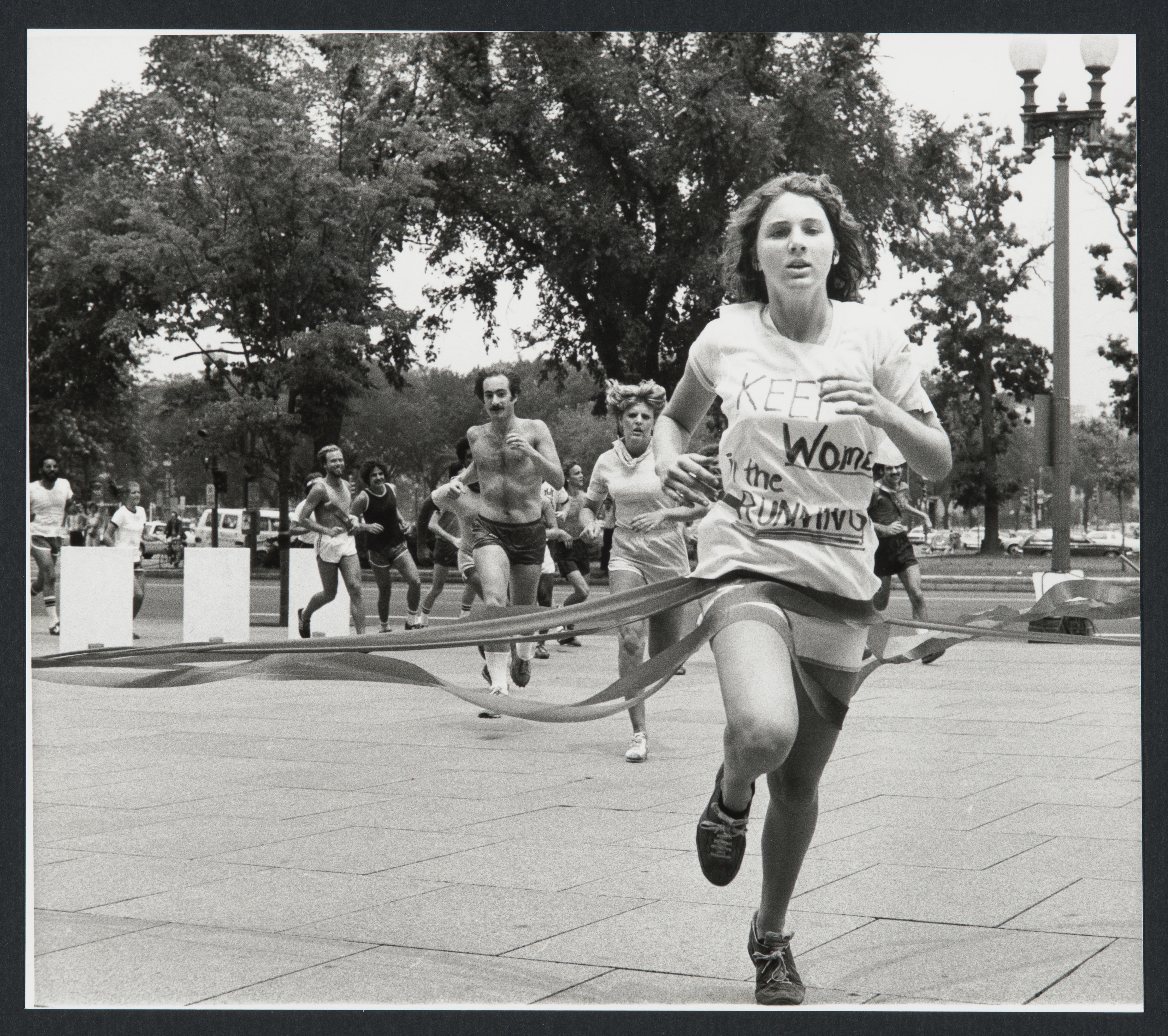 The Break-the-Red-Tape Run and Rally was sponsored by the National Coalition for Women and Girls in Education to protest the government's non-enforcement of Title IX, June 26, 1978. From In the Running, 1978. Courtesy of Schlesinger Library

Ribbon from the Break-the-Red-Tape Run and Rally, June 26, 1978. Courtesy of Schlesinger Library

According to the Project on Equal Education Rights and the Women’s Equity Action League, the implementation of Title IX was moving at a snail’s pace. To the National Collegiate Athletic Association, the conservative activist Phyllis Schlafly, and especially football coaches, Title IX was moving way too fast. The Department of Health, Education, and Welfare had to balance those competing viewpoints as it drew up guidelines for enforcing the law. Should girls’ and boys’ teams be combined, or should sports follow a separate-but-equal approach? Did giving more opportunities to girls mean taking them away from boys? Who was going to pay for all these new teams? “I think almost everybody in higher education believes the goal of Title IX is worthy,” noted the president of the University of Miami. “The controversy is whether the end justifies the means, and that’s the battleground where this is being fought.” 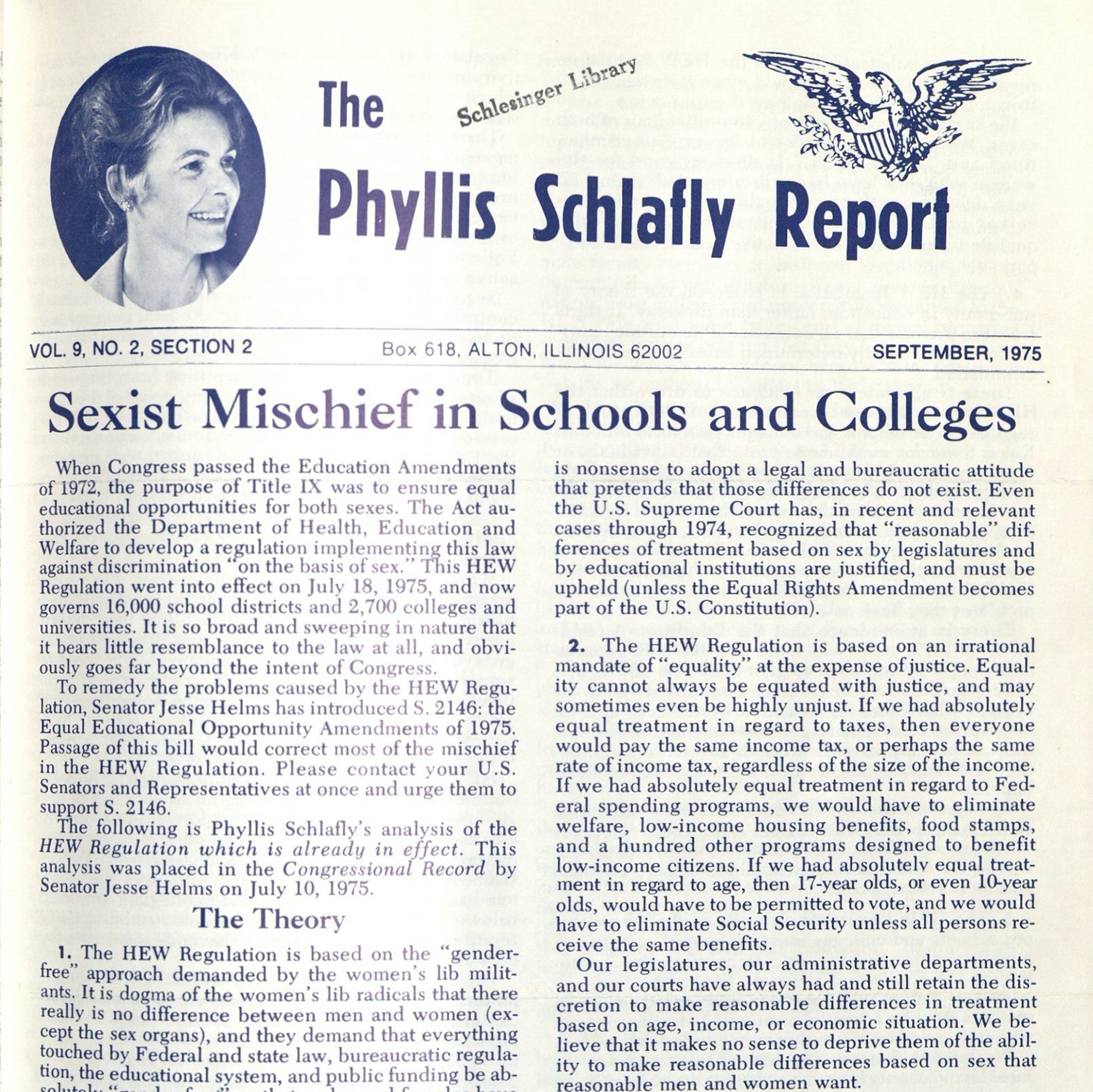 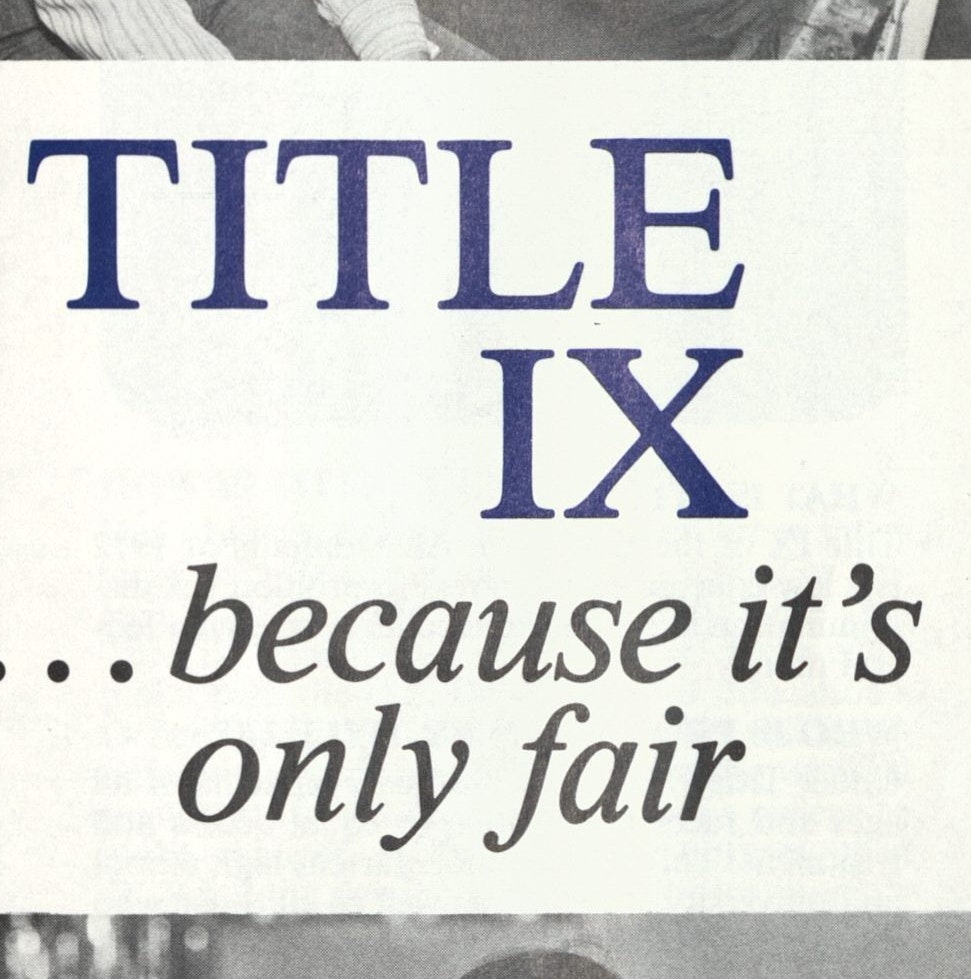 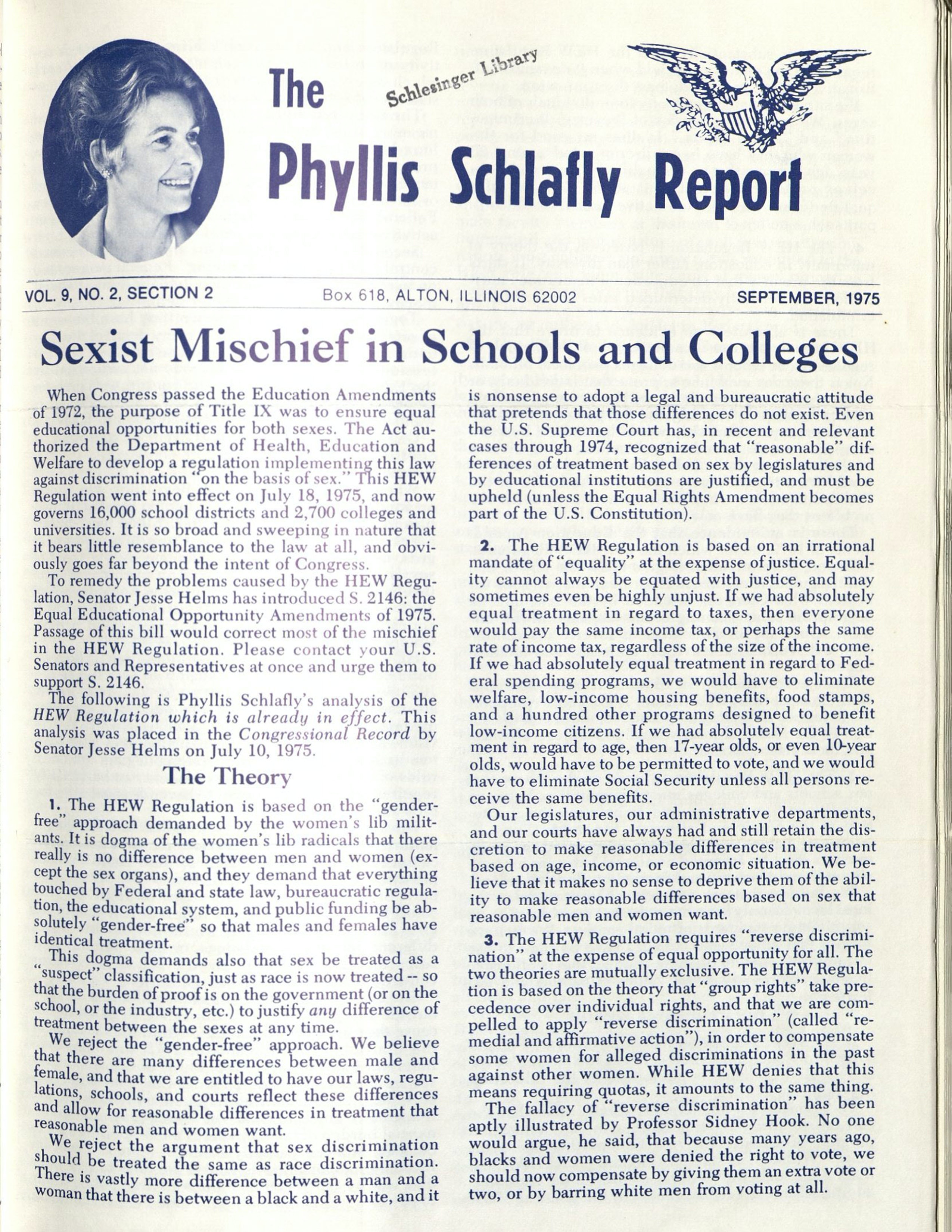 From the Phyllis Schlafly Report, September 1975. Courtesy of Schlesinger Library

Title IX is a very flexible law. Instead of telling schools what they have to do, it allows them to choose how to accomplish its goals. The law does not mandate equal expenditures for both sexes, nor does it require that equal numbers of men and women participate on teams. It does require that participation opportunities for male and female athletes be substantially proportionate to their general enrollment. Because women started practically at zero, they saw dramatic increases almost overnight. Suddenly, the world of sports looked very different: no longer exclusively male and with a diversity of women taking the playing field. Women’s success at the 1984 Olympics, made possible in part by access to coveted athletic scholarships previously reserved for men, put them on Wheaties boxes. Along with advances in sports came breakthroughs in other traditionally male fields like science, technology, and the military. 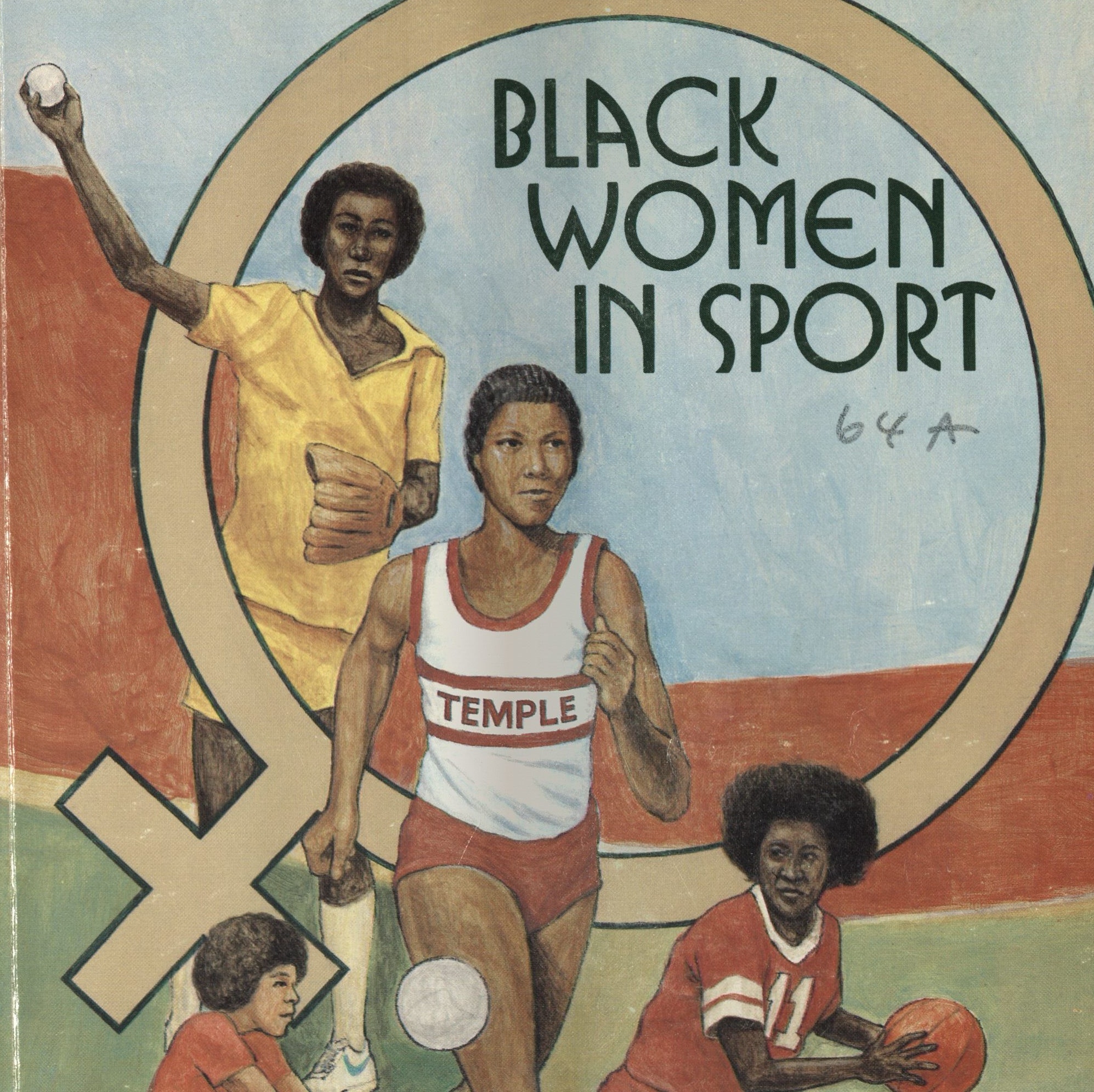 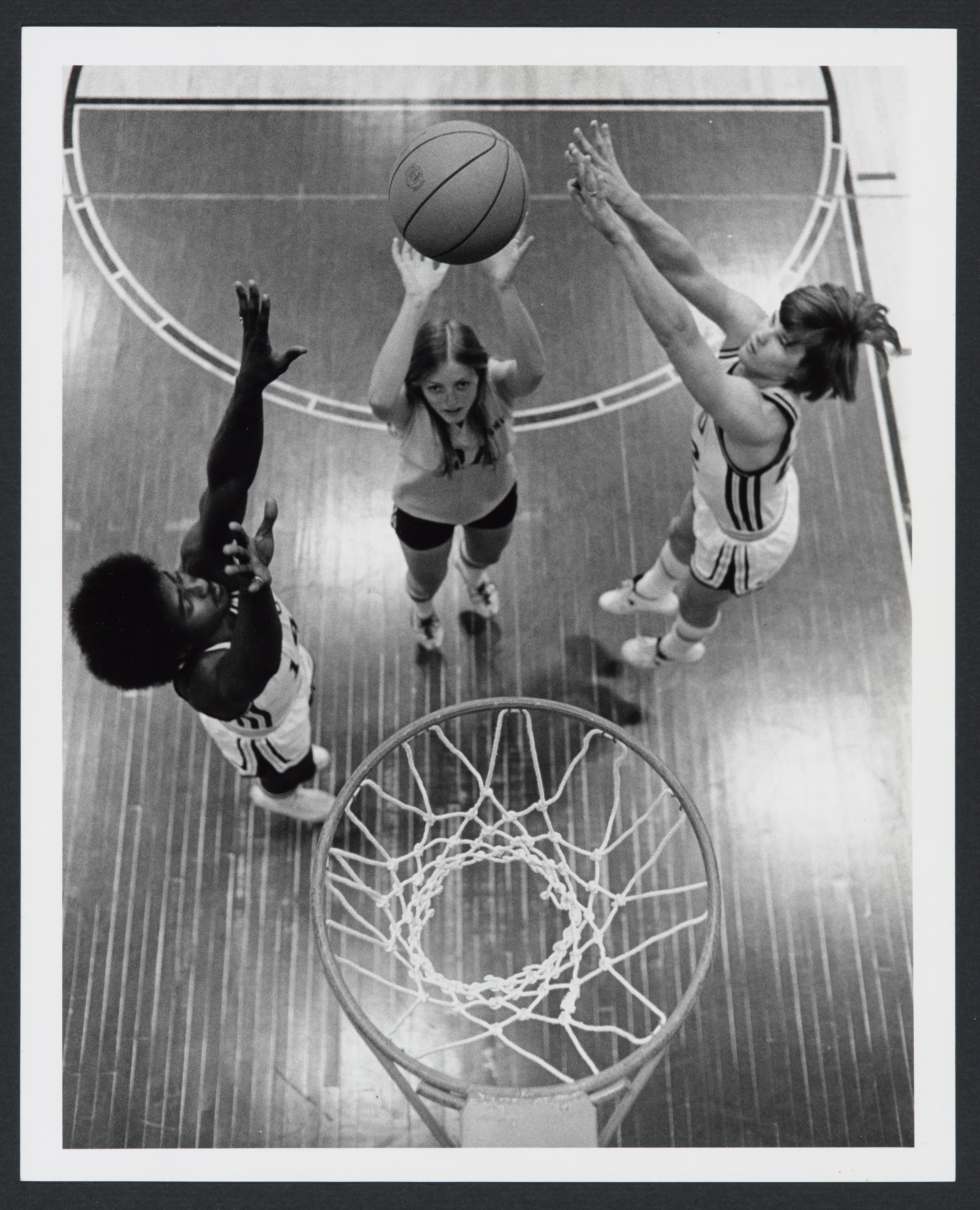 From the records of the Project on Equal Education Rights. Photograph by the National Education Association. Courtesy of Schlesinger Library 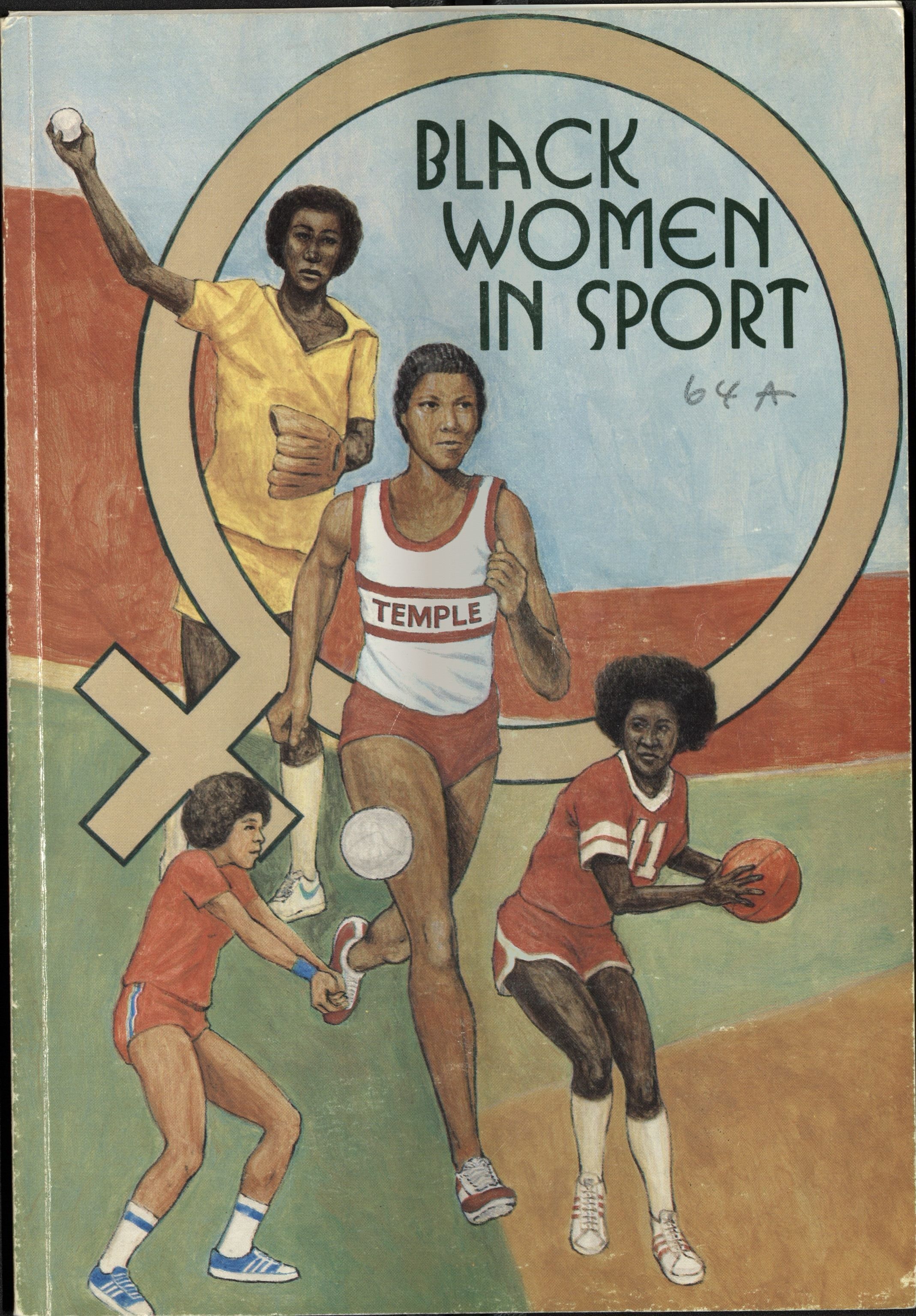 Title IX covers all aspects of sex discrimination in education, and its impact goes far beyond athletics. In the 1970s, Title IX outlawed arbitrary caps and quotas on women’s enrollment in certain professional schools, helped challenge the tracking of boys into vocational classes while girls studied home economics, and ended the practice of automatically expelling female high school students for becoming pregnant. Starting in the 1990s, Title IX became linked to the fight against sexual harassment and violence against women on campus, a topic which has been extensively explored by feminist scholars. Backed by the threats of Title IX lawsuits and the possible loss of federal funds, women had an important tool to force change at their institutions. 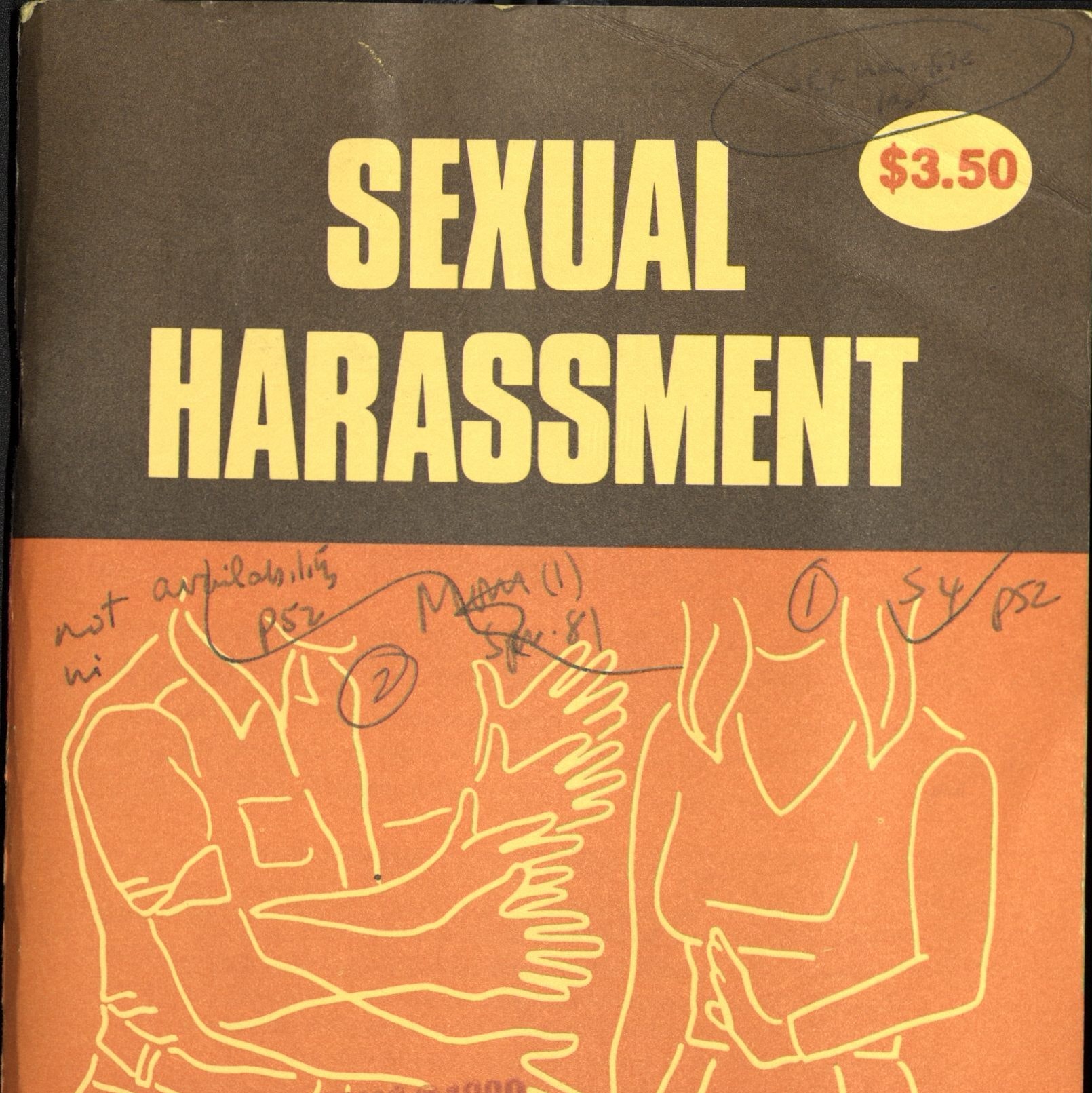 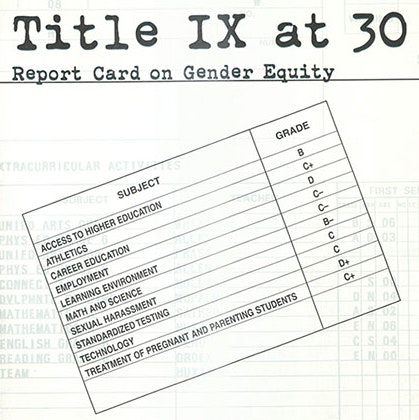 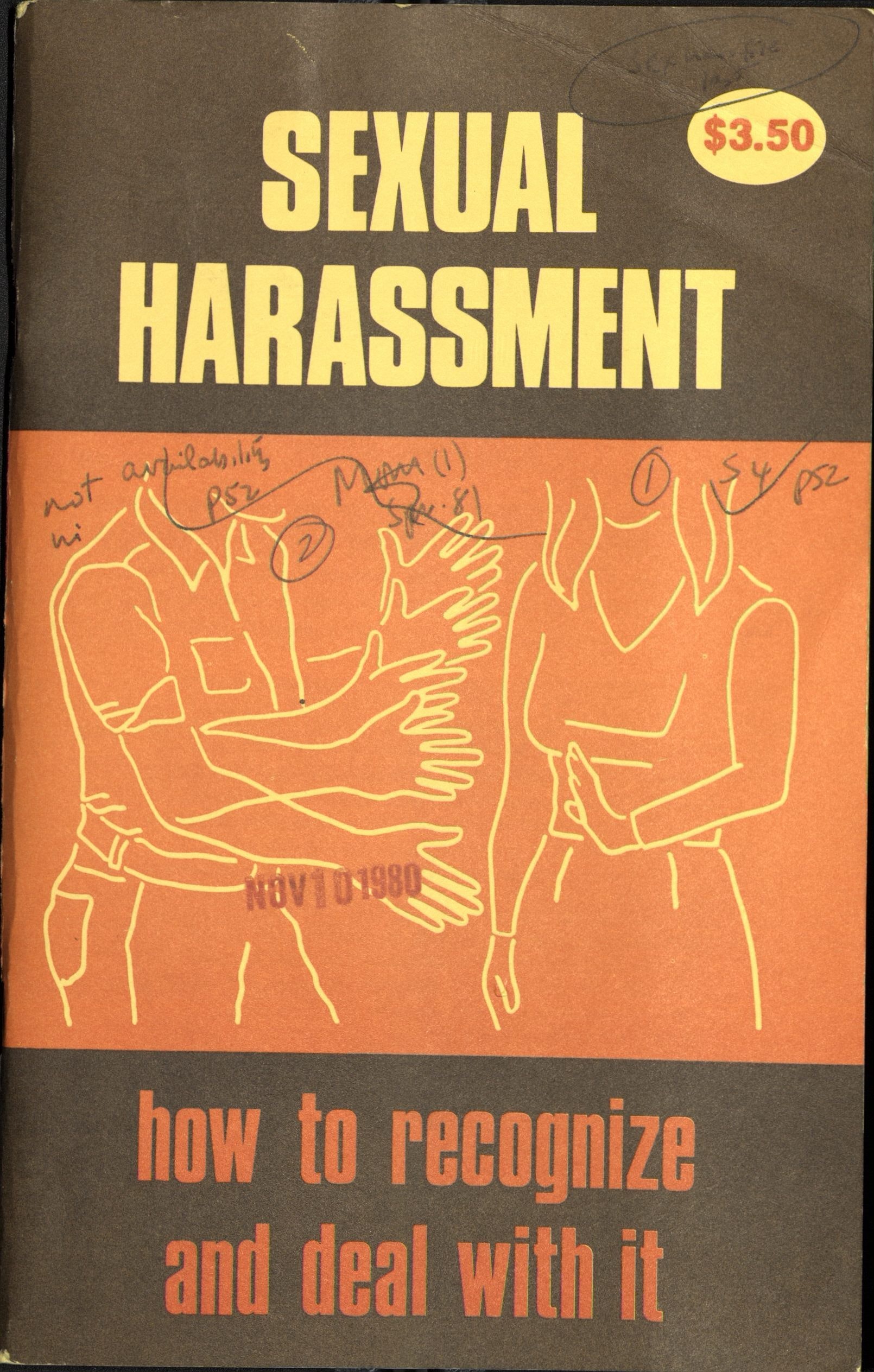 Sexual Harassment: How to Recognize and Deal with It by Mary M. Fuller, 1979. Courtesy of Schlesinger Library 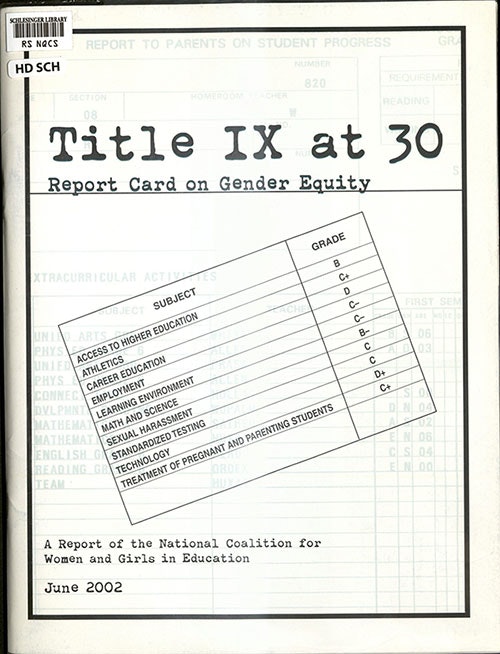 Title IX at 30: Report Card on Gender Equity, published by the National Coalition for Women and Girls in Education, 2002. Courtesy of Schlesinger Library

Welcome to the brave new world of women’s sports. Companies, often founded by women, cater to the gear and equipment needs of women athletes. Women are on the covers of mainstream media publications and participate in major sporting events like March Madness and the World Cup, although they receive far less overall coverage than men. Girls can envision a future playing professional sports, but at salaries that are a pittance compared to male superstars. Strong, athletic bodies sell products—but advertising also promotes unrealistic and sexist expectations about what the female body should look like, part of the ongoing tension between athletic achievement and femininity. Women’s sports have indeed come a long way, but gender equity is still an elusive goal. 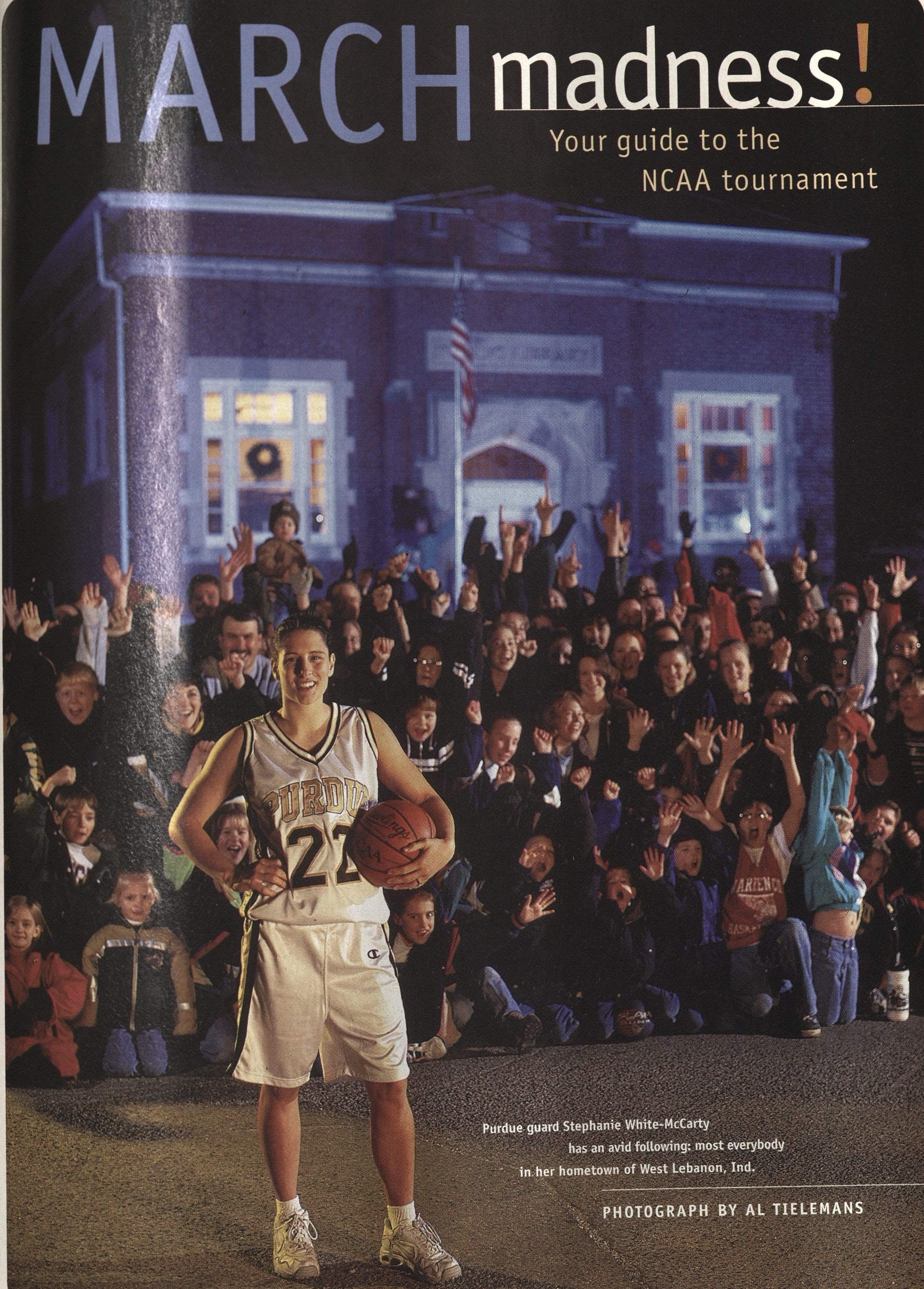 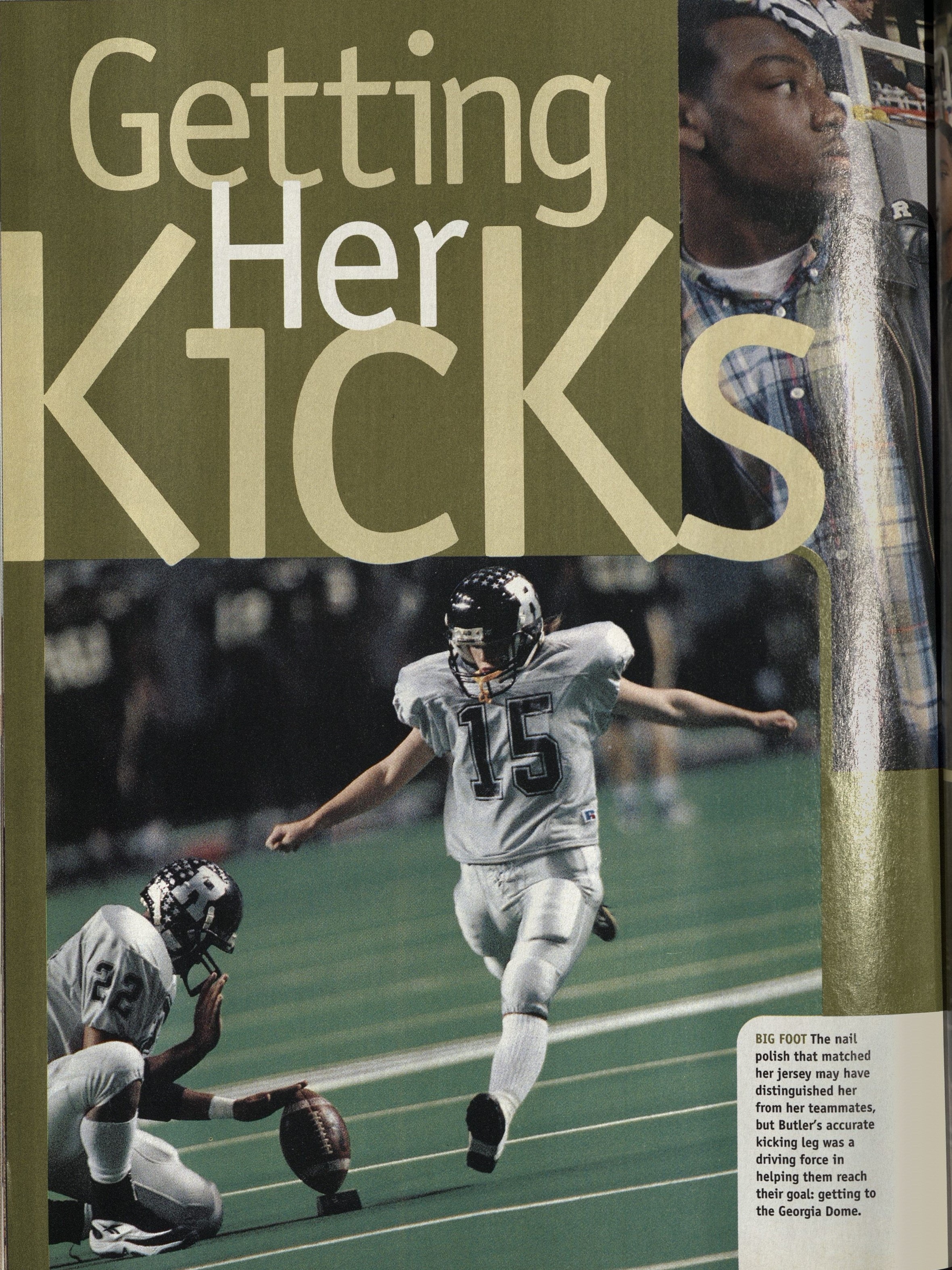 Getting Her Kicks, from Sports Illustrated for Women, spring 1999. Courtesy of Schlesinger Library

Radcliffe women had been rowing on the Charles long before Title IX, although they were restricted to the recreational Weld Boathouse. When Harvard and Radcliffe entered into their “non-merger merger” in 1971, the formerly separate athletic departments combined. Most women’s teams adopted the Harvard name, but the crew team voted to continue competing as Radcliffe—and still competes under that name. In 1974, the Radcliffe heavyweight crew won the first Ivy League women’s championship. Acknowledging their debt to Title IX, the Radcliffe Crew later named one of their boats in its honor.