This suffrage button was one of many created in the long fight to win the vote for women in the United States. Supporters marched, petitioned, and lobbied until the adoption in 1920 of the 19th Amendment to the U.S. Constitution, allowing women to vote. From the collections of the Schlesinger Library 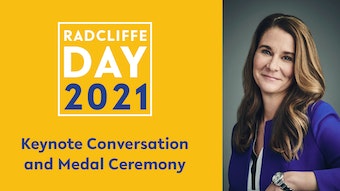 On Radcliffe Day 2021—Friday, May 28—we will honor Melinda French Gates through a program on how best to achieve gender equity in the United States. It is a question at the forefront of Gates’s advocacy and philanthropy and one that continues to challenge scholars, policy makes, and practitioners.

We invited several leading figures representing diverse fields to offer their perspectives on the long and ongoing journey toward gender equality in the United States.

Margaret H. Marshall is the 24th—and first woman—chief justice of the Massachusetts Supreme Judicial Court, and the recipient of the 2012 Radcliffe Medal, among many other honors. Marshall has been a champion of justice and equality throughout her life, including early in her career when she organized student protests against apartheid in South Africa.

Noting her own surprise at her answer to the question of how best to achieve gender equity, Marshall implores us to “defend our right to vote with everything we have.” Calling democracy an insufficient but “absolutely necessary” condition for achieving gender equity, she calls on women to “stand up, disrupt, fight” and, indeed, shame those who work to make voting more difficult.

Claudia Goldin is the Henry Lee Professor of Economics at Harvard University and former director of both the American Economic Association, and the Development of the American Economy program at the National Bureau of Economic Research. She is the author of several books, including Understanding the Gender Gap: An Economic History of American Women and the forthcoming Career and Family: Women’s Century-Long Journey toward Equity.

In the pursuit of gender equity, Professor Goldin directs our attention to the interaction between the family and the marketplace—“two sides of the same coin.” She goes on to explain the concept of couple inequity, a function of the high cost of flexibility and control in our professional lives, which she terms “greedy work.” A feature of most relationships, couple inequity among heterosexual partners is a key driver of gender earnings gaps, Professor Goldin argues.

Carmen Yulín Cruz Soto is the Harriet L. Weissman and Paul M. Weissman Distinguished Fellow in Leadership at Mount Holyoke College and former mayor of San Juan, Puerto Rico. She is the author of El Poder está en la Calle (Power is in the Street), serves on the board of directors of Annie’s List, and delivered the keynote address at Radcliffe’s 2019 conference “Unsettled Citizens.”

Yulín Cruz, like Margaret H. Marshall who contributed our first video in this series, emphasizes the power of the vote. Yulín Cruz calls for efforts to elect women “up and down the ballot,” but she also argues we must work to support women “in the classroom and in the boardroom,” and calls on us to “mobilize, organize, and strategize” to achieve policy outcomes that have lasting impact for women.

Amanda Nguyen ’13 is the CEO and founder of Rise, a social movement accelerator that fights for the rights of sexual violence survivors worldwide. Nguyen played an instrumental role in securing the passage of the Survivors’ Bill of Rights Act of 2016—the 21st bill in modern US history to pass unanimously on the record. In 2019, she received the 24th Annual Heinz Award in Public Policy.

To achieve gender equity in the United States, Nguyen says, “we must invest in women of color,” and further notes that “the people who have the solutions to the most complicated problems are the people who live that problem every day.” She goes on to reflect on her experience seeking justice for survivors of sexual violence, saying that it showed her that “no one is invisible when we demand to be seen.”