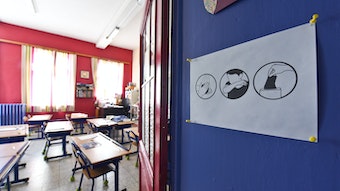 Play video
Is Now the Time to Build a Better System? K–12 Education and Systemic Racism in the Era of COVID-19 Ensuring Health Equity for Persons with Disabilities Health, Inequity, and COVID-19

With Pride canceled and many other community and social supports suspended during the pandemic, COVID-19 presents particular challenges to the health and well-being of LGBTQ people, who already experience health disparities. Drawing from LGBTQ history and recent political events, this Radcliffe webinar brings together historians, physicians, and organizers to discuss the disparate impact of the pandemic on the physical and mental health of sexual and gender minorities, as they explore the resilience of queer communities in times of crisis.

Biographical information has been provided by program participants and has not been edited.

Katie Batza is an associate professor in Women, Gender, and Sexuality Studies at the University of Kansas. Her research explores the intersection of sexuality, health, and politics in the late 20th-century United States. She is currently working on a book project that explores the experiences of the early AIDS crisis in the Heartland, a walking tour and podcast project on reproductive justice in Boston, and a cross-disciplinary analysis of access to healthcare for gender non-conforming people who also have a disability. Her first book, Before AIDS, was published by the University of Pennsylvania Press in February 2018 and explores gay health activism in the period before AIDS. She has published on the history of lesbians and the fertility industry, mapping queer health history, and neoliberalism. She played an active role in the National Park Service’s LGBTQ initiative, contributing a chapter to the award-winning National Park Services LGBTQ Theme Study. Her work has been funded by Point Foundation, the National Endowment for the Humanities, the American Council of Learned Societies, the American Philosophical Society, a Mellon-Schlesinger Fellowship from Harvard University, and the Whiting Foundation.

Jessica Halem, MBA, is currently the LGBTQ Outreach and Engagement Director at Harvard Medical School and remains unique in her role among medical schools in the United States. Under her leadership, the first-year class has grown from 4% to 15% self-identified LGBTQ and she secured a $1.5 million-dollar grant to overhaul the curriculum to integrate sexual and gender minority health equity. Prior to joining Harvard, Jessica ran the Lesbian Community Cancer Project in Chicago where she implemented the nation’s first cultural competency trainings for the CDC, served on then-candidate Obama’s first LGBT Advisory Committee, and she began fighting for the inclusion of transgender health equity since 2001. She coaches individuals and groups on dealing with difficult moments using improv skills and is a sought-out speaker nationally on issues of workplace diversity and inclusion. She currently serves on the Board of the Tegan and Sara Foundation and can be found on social media at @jessicahalem.

Cecil R. Webster, Jr., MD is a child, adolescent, and adult psychiatrist in Boston. He is a lecturer in psychiatry at McLean Hospital and Harvard Medical School, and consultant for diversity health outreach programs at the Massachusetts Institute of Technology and other area schools. Dr. Webster is a candidate in child and adult psychoanalysis and a member of the board of trustees at the Boston Psychoanalytic Society & Institute. His areas of expertise include identity formation and related influences such as sexuality, gender, race, ethnicity, and inter-cultural experiences in psychotherapy.

Article released by the HRC about LGBTQ people and COVID-19

BAGLY: The Boston Alliance of LGBTQ+ Youth (BAGLY) was formed in 1980 and is a youth-led, adult-supported organization committed to social justice, and creating, sustaining and advocating for programs, policies and services for the LGBTQ+ youth community.

Resources for Massachusetts LGBTQIA+ Youth During COVID-19: created by the Massachusetts Commission on LGBTQ Youth. *This is a very comprehensive list that is updated frequently and includes community partners such as Boston GLASS, the-AGLYs, OUT MetroWest and more. Topics include information on Financial Relief, Healthcare, Mental Health & Support, Food, Housing, and many other resources.