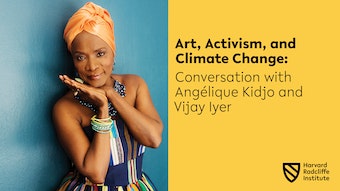 Harvard Radcliffe Institute and the Mahindra Humanities Center at Harvard University present a series of virtual programs focusing on the intersection of art, activism, and climate change. The programs will feature leading figures in the arts and humanities engaging in conversations about their commitment to art and activism as a means to combat climate change, the origins of their interests, and their hopes for the future. With so much at stake for our planet, the work of artists and activists is essential in reaching and moving the public, as well as scientists, policy makers, and journalists. Such cross-disciplinary approaches are central to the multi-year initiatives of both Mahindra and Radcliffe focused on climate change, with a particular emphasis on environmental justice.

The first program in the series will feature Leanne Betasamosake Simpson in conversation with Tania Willard.

Harvard Radcliffe Institute gratefully acknowledges the Ethel and David Jackson Fund for the Future Climate, which is supporting this event.

Leanne Betasamosake Simpson (Michi Saagiig Nishnaabeg) is an independent scholar, writer, and artist whose work offers a leading voice and perspective on contemporary Indigenous issues. Simpson is a member of Alderville First Nation. She has taught at universities in Canada and the US using Nishnaabeg intellectual practices, and she has deep experience with Indigenous land-based education. Storytelling features prominently in her work, which incorporates Indigenous worldviews, including many relating to the environment. Simpson’s art and activism, including her active participation in the Idle No More movement, focus on building collective futures while protecting and living in concert with our natural world. She powerfully critiques extractivism, both in the removal of natural resources from the Earth and through the appropriation of Indigenous ideas.

Simpson received her PhD from the University of Manitoba and she teaches at the Dechinta Centre for Research and Learning in Denendeh, located near Yellowknife, Northwest Territories. She is the author of eight books, including A Short History of the Blockade: Giant Beavers, Diplomacy, and Regeneration in Nishnaabewin (University of Alberta Press, 2021) and the novel Noopiming: The Cure for White Ladies (University of Minnesota Press, 2022). Her writings have been short listed for the Governor General’s Literary Awards for fiction and nonfiction, the Dublin Literary Prize, the Rogers Writers’ Trust Fiction Prize, and the Trillium Book Award. As a musician, Simpson’s 2021 album, Theory of Ice, was named to the Polaris Prize short list, and she is the 2021 winner of the Prism Prize’s Willie Dunn Award.

Tania Willard is a mixed Secwépemc and settler artist whose research intersects with land-based art practices. Her practice activates connection to land, culture, and family, centering art as an Indigenous resurgent act, though collaborative projects such as BUSH Gallery and support of language revitalization in Secwépemc communities. Her artistic and curatorial work includes Beat Nation: Art, Hip Hop and Aboriginal Culture at the Vancouver Art Gallery (2012-2014) and Exposure: Native Art and Political Ecology at the IAIA Museum of Contemporary Native Arts, Santa Fe (ongoing). Willard’s work is included in the collections of the Vancouver Art Gallery, Forge Project, Kamloops Art Gallery, and the Anchorage Museum, among others. In 2016, she received the Hnatyshyn Foundation’s Award for Curatorial Excellence in Contemporary Art. In 2020, the Shadbolt Foundation awarded her their VIVA Award for outstanding achievement and commitment in her art practice, and in 2022 she was named a Forge Project Fellow for her land-based, community-engaged artistic practice.