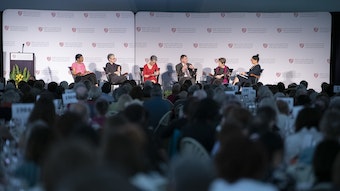 On Radcliffe Day 2018, Friday, May 25, we will award the Radcliffe Medal to Hillary Rodham Clinton.

As an attorney, a first lady, a senator, a secretary of state, and the first woman nominated by a major party for the US presidency, Secretary Clinton has worked tirelessly over the course of decades in the public eye, often under unprecedented scrutiny, to make meaningful change. Radcliffe Day will feature a personal tribute to Secretary Clinton delivered by the global affairs trailblazer, former secretary of state, and 2001 Radcliffe Medalist Madeleine Albright and a wide-ranging keynote conversation between Secretary Clinton and Massachusetts Attorney General Maura Healey ’92.

The day’s program will open with a panel titled “Toward a New Global Architecture? America’s Role in a Changing World.” In 2009, then–Secretary of State Clinton outlined a vision for a global architecture “in which states have clear incentives to cooperate and live up to their responsibilities, as well as strong disincentives to sit on the sidelines or sow discord and division.” Nearly a decade later, the US is still grappling with complex questions about its role in global affairs. Nicholas Burns, the Roy and Barbara Goodman Family Professor of the Practice of Diplomacy and International Relations at Harvard Kennedy School and a career diplomat who served as US ambassador to NATO and under secretary of state for political affairs, will moderate a discussion exploring these issues featuring the foreign policy experts Michèle Flournoy ’83, David Ignatius ’72, Meghan O’Sullivan, and Anne-Marie Slaughter JD ’85.

Panel: Toward a New Global Architecture? America’s Role in a Changing World

Nicholas Burns is the Roy and Barbara Goodman Family Professor of the Practice of Diplomacy and International Relations at Harvard Kennedy School, where he is also faculty director of the Future of Diplomacy Project and the Transatlantic Relations Initiative. A career foreign service officer, Burns served in the US government for 27 years.

Madeleine K. Albright is the chair of Albright Stonebridge Group, a global strategy firm, and chair of Albright Capital Management LLC, an investment advisory firm focused on emerging markets. She was the 64th secretary of state of the United States. Named in 1997, she was the first female secretary of state and became the highest-ranking woman in the history of the US government at that time. From 1993 to 1997, Albright served as the US permanent representative to the United Nations and was a member of the president’s cabinet. She is the Michael and Virginia Mortara Endowed Distinguished Professor in the Practice of Diplomacy at the Georgetown University School of Foreign Service. Albright chairs the National Democratic Institute’s board of directors. She is also the president of the Harry S. Truman Scholarship Foundation and a member of the US Department of Defense’s Defense Policy Board. The 2001 Radcliffe medalist, she was chosen by President Obama in 2012 to receive the nation’s highest civilian honor, the Presidential Medal of Freedom, in recognition of her contributions to international peace and democracy.

Maura Healey ’92 is the attorney general of Massachusetts, leading the People’s Law Firm in the fight for fairness and equality. Healey has gained national prominence for her leadership in Massachusetts since she took office, in January 2015.

A Conversation with Hillary Clinton

Toward a New Global Architecture? America’s Role in a Changing World