On May 25, 2018, Hillary Rodham Clinton received the Radcliffe Medal, in the largest Radcliffe Day celebration yet. 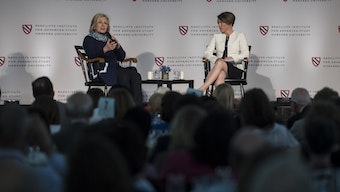 May 25 was a beautiful, sunny day and the largest Radcliffe Day ever. Nearly 2,000 attendees gathered in two tents—one in Radcliffe Yard and one across the street in Greenleaf Yard—to celebrate The Radcliffe Campaign and watch Hillary Rodham Clinton receive the Radcliffe Medal.

America’s Role in a Changing World

The morning panel—titled “Toward a New Global Architecture? America’s Role in a Changing World”—re-called Clinton’s work as US secretary of state from 2009 to 2013. “The challenges Secretary Clinton grappled with almost 10 years ago are still very much with us,” said then–Radcliffe Dean Lizabeth Cohen. “And many of them feel only more urgent today.”

Nicholas Burns—a foreign service officer for 27 years before he joined Harvard Kennedy School as the Roy and Barbara Goodman Family Professor of the Practice of Diplomacy and International Relations—moderated the panel.

Burns paid tribute to Cohen, who was presiding at her last Radcliffe Day before stepping down as dean after seven years in the position. “She has led this Institute,” he said, “with strength and dynamism and passion and an unfailing belief that reason and empirical thought and the pursuit of knowledge represent the highest values of the Radcliffe Institute and of Harvard University.”

As prelude to the panel, Burns enumerated many of Hillary Clinton’s diplomatic achievements. “She pioneered an important conceptual change about how we should think about diplomacy,” he said. “It was her insight that American diplomacy, American development, and American defense must all be linked in one cohesive national strategy.”

“This panel is meeting at a time when America’s greatness on the global stage is being challenged as never before,” Burns said. He pointed out that every president after World War II until President Trump believed that US pow-er and purpose were based on “enduring foundations such as NATO, free trade, and a willingness to keep America’s doors open to immigration and refugees.” Now, he said, “we are retreating in all of those areas.”

The four panelists, beginning with Anne-Marie Slaughter JD ’85, addressed questions posed by Burns. Slaughter was a professor at Harvard Law School from 1994 to 2002 and from 2009 to 2011 served as director of policy planning at the State Department, where she worked with Clinton.

DOES THE UNITED STATES STILL LEAD IN THE WORLD?

Burns asked Slaughter whether she agreed or disagreed with the view that the United States is no longer leading in the world. “Right now,” she responded, “we are less the global hegemon than the global hypocrite.” In her view, “we need to make foreign policy and diplomacy the work of many, many more people than those of us on this panel and in this University and in Washington.” Slaughter pointed out that cities throughout the country are playing an important role in ﬁghting terrorism and climate change. “We are going to meet our commitments through those cities’ efforts and the efforts of universities, businesses, nonproﬁt leaders—all of us.”

What Should President Trump Do about Putin and the Defense of Democracy?

Michele Flournoy ’83, who served as the undersecretary of defense for policy from 2009 to 2012—when she, too, worked with Clinton—tackled Burns’s question about Putin. “The most important step we need to take is to re-establish a very clear policy of deterrence,” she said. “We need to clarify where the lines are with Putin with regard to us and our European allies.” Above all, she said, the United States has to deter Russian meddling in the next round of US elections. “This is the biggest threat to our democracy that exists,” she said.

The United States Has Been the Most Important Outside Power in the Middle East Since the 1970s. Is There an Overarching Strategy That Our Government Should Pursue There?

Megan O’Sullivan, the Jeane Kirkpatrick Professor of the Practice of International Aﬀairs at Harvard Kennedy School, who served as a special assistant to President George W. Bush and was the deputy national security advisor for Iraq and Afghanistan, was the ﬁrst panelist to address this question. “In fact,” she said, “it still is very much in US interests to be engaged in the Middle East and to be invested in a better outcome for that part of the world.” But one strategy won’t suffice, she said, to address all the challenges there.

David Ignatius ’72, an associate editor and columnist for the Washington Post and a fellow at Harvard Kennedy School’s Belfer Center, said that much of the Middle East, but particularly Syria, is a tragedy. “We feel a sense of horror,” he said, “for what’s happened to people.” Ignatius recalled traveling two months earlier through Raqqa, the capital of the Islamic State. “It looks like the pictures we remember of the Battle of Berlin at the end of World War II,” he said. “It’s a nightmare.” While Syria as a whole is a failed state, he said, in the east of the country, US Special Forces and our allies have almost completely destroyed ISIS. The United States can “bring to bear a level of military power that people just have to take seriously.

Healey
I know there are a lot of people in the audience who wish Chelsea well, and Charlotte and your grandson, and are also looking for some advice on how to raise strong girls and women in today’s world. Do you care to say anything to that?

Clinton
I want to mention one area that I feel really strongly about. We need to develop empathy and kindness in our children, for themselves and for others. I was really fortunate because when I was very young, through my church I had a lot of those experiences. . . . There are many ways of trying to raise strong, bright kids, but I hope we can raise strong, bright, kind, and empathetic kids as well.

Healey
Just weeks ago on this very campus, Parkland students came to town. We see this incredible surge in energy by young people all across the country. What do you make of this, and what would your advice be to young people today?

Clinton
I’m thrilled by the activism we’re seeing. One of the most difficult issues we confront is the tragically high rate of gun deaths in this country and the constant pattern of mass shootings. . . . What the Parkland students are trying to do—and I’m very much admiring of this—is to turn commonsense gun safety laws into a voting issue. People will say, “Well, it’s always been a voting issue, hasn’t it?” It has been for the other side.

Former Secretary of State Madeleine Albright delivered a testimonial about her friend Hillary Rodham Clinton. Here is an excerpt:

I would not have been secretary of state if it hadn’t been for Hillary. . . . President Clinton said so publicly. . . . We were actually traveling abroad, and we were at a foreign embassy. We used to have this thing where I’d introduce Hillary, and she would introduce him. . . . During this period of great mentioning, Hillary came to him—she said, “Why wouldn’t you name Madeleine? She is most in tune with your views, expresses them better than anybody else, and besides, it would make your mother happy.” . . . As I think many of you here can attest, there’s nothing like a good job recommendation when you need it.