Looking to the Past to Understand the Future of Climate Change

In the past 100 years, “we’ve experienced more drastic climate change than any other human has ever experienced. There’s no analogy in human society,” says Hong Yang, the 2022–2023 William and Flora Hewlett Foundation Fellow. Since we cannot consult a historical record to see how past humans adapted to climate change, we turn instead to the geological one.

One of the few glimpses the Earth offers of what our warming future could look like comes to us via 15-million-year-old sedimentary rocks and fossils found at a geological research site near the small town of Clarkia, Idaho (population less than 336). These layers of rock preserve a record of a time when atmospheric CO2 levels were very similar to where they will likely be in the next 20–30 years if we don’t control the current rate of greenhouse gas emissions.

Yang went to college in Wuhan, China, and studied geology. “At the time, we were taught that we needed coal and petroleum deposits and gas fields for energy, but few people realized that burning fossil fuels creates emissions that cause climate change. As an earth scientist, I would have never dreamed something that in the past has happened over millions of years [climate change] could happen in the span of a lifetime,” says Yang, adding that it’s only in the past 10 or so years that scientists realized just how fast the rate of change is.

Harvard Radcliffe Institute: How and why did you first become interested in studying climate change?

Hong Yang: As an earth scientist, studying long-term climate change has always been a part of my profession. But the Clarkia site I’m working on gave me a fresh look at the rate and impact of climate change in the short term. When the site was discovered in the 1970s, it was significant geologically because it contains some beautifully preserved fossils and a suite of biomolecules like no other site. But only quite recently did we realize that the site may hold keys to understanding the near future of climate change. We recently dated volcanic ash embedded in sedimentary rocks that are around 15 million years old—a geological period known as the Miocene Climate Optimum. We were able to reconstruct that the CO2 level at this time was around 500–550 parts per million (PPM). That is roughly double the preindustrial level [preindustrial CO2 was around 280 PPM] but close to where we will be in the next few decades if we don’t control the current rate of emissions. And because the site is a lake deposit, we were able to demonstrate its annual resolution, giving us an unprecedented, high-resolution climate record of an ancient past with a near-future CO2 level. Essentially, it offers an “imaginary” picture of what this type of climate change—and associated ecological impacts—looks like.

HRI: Could you describe in more detail the work that you are doing at Radcliffe?

HY: My Radcliffe project has two components. The first one is scientific: continuing to work on the geological site that I mentioned. As part of a prior National Science Foundation–funded project, we looked at temperatures and CO2 changes during the Miocene Climate Optimum. Now, we’re focused on figuring out the role of another very important greenhouse gas, methane. We’re collaborating with Ann Pearson, who is a former Radcliffe fellow and now the chair of the Harvard Department of Earth and Planetary Sciences, and we have student Radcliffe Research Partners in the lab working on sediments from the Clarkia site.

The second aspect of my project is educational. I am working with another Radcliffe Research Partner to explore how to best convey scientific information [about climate change]. Our current plan is to interview climate change education leaders and experts in the Harvard community and survey Harvard students. The question we are investigating is, “What kind of intellectual capacity or competency regarding climate change do college students, regardless of their majors, need in order to make sound arguments and to adapt to the new climate environment?” I’m also trying to collaborate with artists to visualize the impact of climate change based on what we’ve learned from the geological record. I haven’t identified a particular format yet but, later this month, I have artists coming from Ohio to visit me so we can brainstorm.

“The question we are investigating is, ‘What kind of intellectual capacity or competency regarding climate change do college students, regardless of their majors, need in order to make sound arguments and to adapt to the new climate environment?’”

HRI: Based on what you’ve seen in your research, what kinds of changes resulting from high CO2 levels can we expect in the next 20–30 years?

HY: What we’ve seen at our site, which offers insight into a scenario that is likely (but we hope to avoid) in the near future, is that the global temperature was about five or six degrees Celsius warmer. Scientists believe that this warming period was caused by greenhouse gases emitted during volcanic eruptions. As a result of higher global temperatures, there was either an absence of Arctic ice or very little of it, and without the Arctic ice, the Earth system changed a lot. The sea level was about two meters higher. There was also a shift of vegetation about 20 degrees North.

For example, in our Clarkia site, we found fossils of redwood trees, such as the Metasequoia, or dawn redwood, a rare species currently growing only in southern China. We also found abundant fossils of the bald cypress (Taxodium), which currently grows in Florida and Georgia. The presence of these fossils at the Clarkia site indicates that these trees were abundant at higher latitudes during the warm period in the Miocene epoch, as opposed to the relatively low latitudes they occupy today.

HRI: You’ve said that one of your goals is to communicate information about climate change science to a broader audience. What are some of the challenges of communicating scientific data to the general public or to people from other disciplines?

HY: Climate change information is particularly difficult to get across because we can’t see or smell CO2. But CO2 molecules are there, and their concentration, although in trace amounts, can be precisely measured and has been well documented. We must rely on scientists to tell us that the levels are increasing at an unprecedented rate. It is also difficult for people to comprehend just how fast the rate of change is. Fifteen million years ago was the last time Earth had a CO2 level around 500 PPM; it took 15 million years for it to decrease to the preindustrial level. But it took us humans less than 100 years to go from the preindustrial level of CO2 to nearly 500 PPM (today’s global average CO﻿2 level is 416 PPM). That timescale is very difficult to comprehend, even for scientists. Nobody has seen the ecological impact of such a high-CO2 world. I think that’s why there is misinformation about climate change. 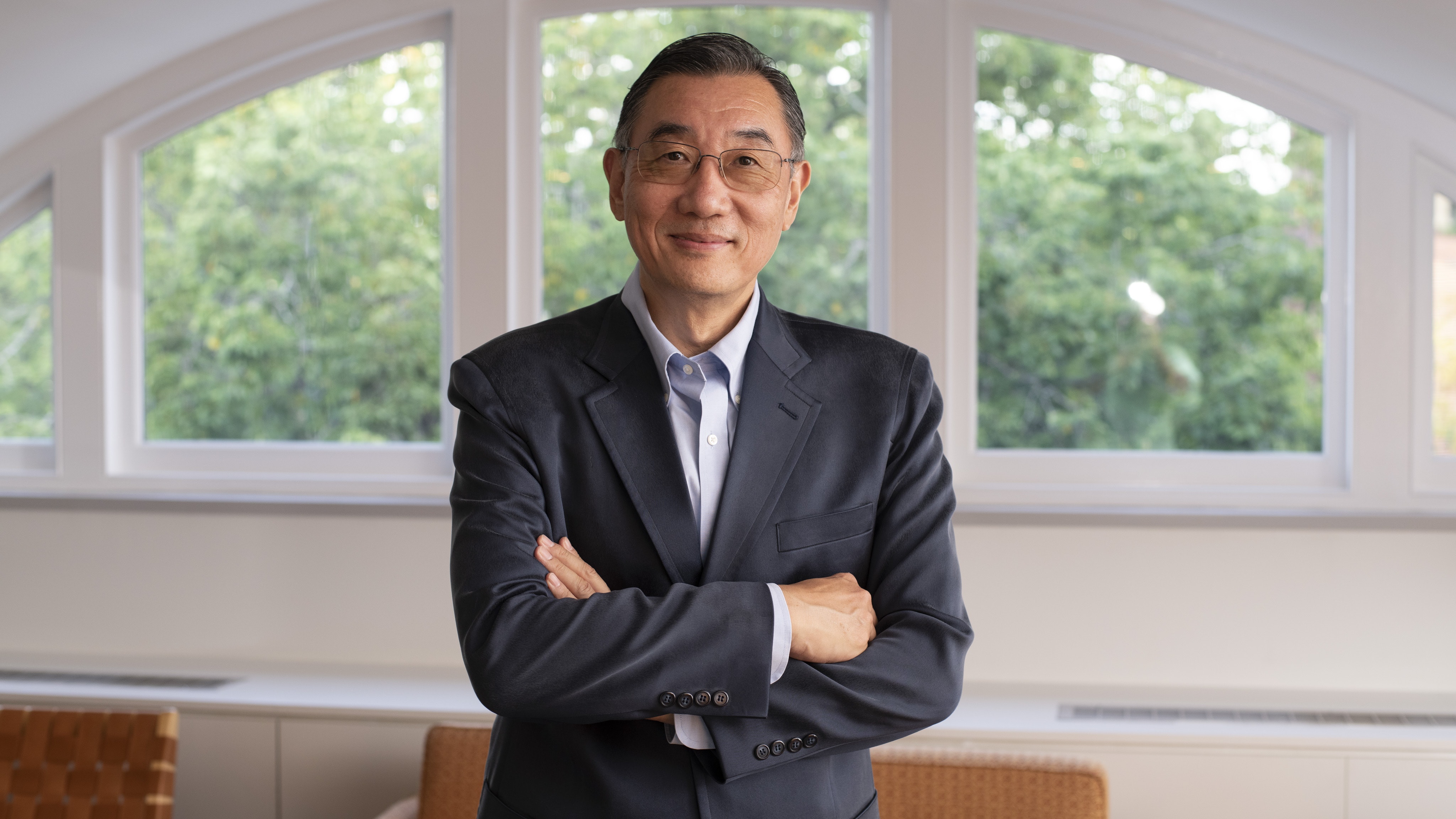 Yang says that climate change is a particularly difficult issue to communicate to the general public because CO2 is invisible to our senses. Photo by Tony Rinaldo

HRI: Are there any misconceptions about climate change that you’d like to dispel?

HY: Just the other day, I was riding the bus from Harvard Square, and next to me was a tourist from Amsterdam. We’re chatting, and I ask, “Why are you here?” And he says, “to visit Harvard.” Then he asked me why I’m here. I told him I’m here as a Radcliffe fellow working on climate change. Suddenly his eyes lit up and he said, “Oh, there’s something I want to talk to you about. Don’t you think that the Earth has been warm in the past? Hasn’t it always switched back and forth between warm and cold? Is climate change really caused by humans?”

I said, “Well, my research data shows it is.” And I start to explain quickly because it’s a short stop. I’m not sure I could convince him that while Earth is always changing its CO2 level and temperature, it has never been as rapid a rate of change as we are experiencing now. This change is clearly caused by human activities.

HRI: What kinds of policies would you like to see implemented at the local and/or national level, to combat climate change or mitigate its consequences?

HY: For one thing, there needs to be more international collaboration. Nations will have to work together to keep their promise of reducing CO2 and other mitigation and adaption goals. It’s also important to incorporate climate justice into the conversation, because even though climate change impacts everyone, everywhere, the distribution of the impact is uneven. And we must keep in mind the source of the problem, which is the burning of fossil fuels. How we change from a fossil-fuel-based economy to a new, greener economy is a major challenge that we have to tackle through policy and technological innovation, and I think that atmospheric CO2 will continue to increase in the next few decades without a dramatic technological revolution to capture carbon.

“Even though climate change impacts everyone, everywhere, the distribution of the impact is uneven.”

HRI: Is there anything happening right now that gives you hope for the future when it comes to solving or at least surviving climate change?

HY: Yes. Even though I’m looking at the data and I feel the urgency, I’m optimistic. I remember someone compared climate change with aging. Aging is hard to prevent or reverse, and we have to live with that. Yet, how we make our lives better matters; individual choices matter. I think the same for climate change.

It’s almost inevitable that the CO2 level is going to rise in the next 20 or 30 years, unless some miraculous technological breakthroughs happen quickly, but I do think there are ways to reduce the rate of change. There are some promising technologies for sequestering carbon and switching to greener energy sources. Hopefully, the technology will catch up to us so that we can slow down the rate of increase, if not decrease the CO﻿2 level. Let’s not forget, although “efforts to keep the rise in global temperatures to 1.5 degrees above pre-industrial levels is [sic] ‘on life support,’” as UN Secretary-General António Guterres pointed out recently, there is still a narrow window of time to prevent Earth systems from going over climate tipping points, if we get our act together. At the same time, we need to be prepared to live under new circumstances. We need a new map for the “new world,” and I hope that my scientific research will generate data to help draw that map and navigate that world.

Sam Zuniga-Levy is the communications coordinator at Harvard Radcliffe Institute.