Harvard Radcliffe Institute’s Climate Change Initiative is an effort to explore the impacts of the climate crisis through an interdisciplinary lens and to address issues of climate justice—particularly the disproportionate effects on marginalized communities locally and globally. 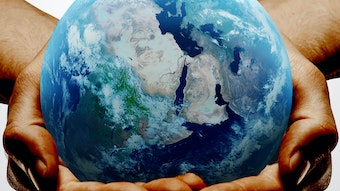 Play video
A Pale Blue Dot under Pressure: Climate Change, Justice, and Resilience in Our Rapidly Warming World Trauma to Transformation: A Set of Existential Opportunities to Address Environmental Justice and the Climate Crisis Hurricanes and Breezes: Visualizing Climate Change

At the heart of this work is the Institute’s commitment to supporting and sharing research that promotes innovative solutions and greater equity. This initiative is driven by the mounting urgency of the global climate crisis and our belief that Radcliffe’s unique approach—interdisciplinary by design and animated by a legacy of promoting inclusion—will generate valuable new insights.

The Institute brings together scholars, students, and practitioners to engage with issues that can only be fully understood by drawing on research from across all disciplines. Climate change is precisely such an issue, one already affecting the lives and livelihoods of people around the world. Radcliffe’s interdisciplinary approach has repeatedly proven to advance research in unexpected and fruitful ways by placing scientific inquiry in dialogue with insights into human behavior and other fields of study. The Institute will support research on issues as varied as reducing human-caused climate change, developing public education on the causes and consequences of the climate crisis, and mitigating the effects of climate change, particularly on the most vulnerable.

The legacy of Radcliffe College—an institution created to allow women access to a Harvard education—animates our ongoing commitment to opportunity and inclusion. This is the foundation upon which we continue to engage with issues affecting historically marginalized communities, which stand to be hardest hit by climate change. Women in particular bear a disproportionate burden, as the United Nations has documented.

Human-induced climate change … has caused widespread adverse impacts and related losses and damages to nature and people. Across sectors and regions, the most vulnerable people and systems are … disproportionately affected.
—Intergovernmental Panel on Climate Change (IPCC) Sixth Assessment Report

On a global scale, the most severe climate risks threaten nations in the Global South, which often lack the resources to mitigate climate impacts. While climate change affects the Global South most acutely, its causes lie primarily in the Global North: the World Resources Institute found that from 1850 to 2011, the United States produced 27 percent of the total climate change–causing carbon dioxide emissions worldwide. No other single country came close.

Over the next five years, Harvard Radcliffe Institute will support our interdisciplinary community of faculty, fellows, staff, and students in their pursuit of climate solutions that address critical questions of human impact and equity. Radcliffe’s work will also include a range of efforts implemented in partnership with Harvard’s Salata Institute for Climate and Sustainability.

The climate crisis and its devastating effects demand urgent action and bold solutions. Indeed, by supporting rigorous interdisciplinary research, I believe that we can generate powerful new tools for reducing threats to our planet and the inequitable impact of the climate crisis locally and globally.
—Tomiko Brown-Nagin, dean, Harvard Radcliffe Institute

Among other activities, Harvard Radcliffe Institute will convene leading scholars, policymakers, artists, activists, and others to:

Explore several strands of our climate work below:

Harvard Radcliffe Institute invests in the work of leading scholars, public intellectuals, and practitioners focused on climate change and climate justice through its Fellowship Program. Radcliffe also sponsors private multidisciplinary seminars led by Harvard- and Radcliffe-affiliated scholars to launch and support important research agendas. Each seminar convenes 10–15 scholars and practitioners from around the world to advance their work in a collaborative setting.

In addition, the Harvard Radcliffe Institute awards grants to undergraduate and graduate students at Harvard who are pursuing research, service, and creative projects in fields related to climate justice and climate science.

Pedagogy of the Rainforest: An Indigenous Yanomami Perspective (October 12, 2022)

Trauma to Transformation: A Set of Existential Opportunities to Address Environmental Justice and the Climate Crisis (October 25, 2022)

Previous programs related to climate include:

Next in Climate Change: The Ethel and David Jackson Next in Science Program, 2022

Thea Riofrancos | Brine to Batteries: The Extractive Frontiers of the Global Energy Transition, 2021

Protecting People from the Ocean, and the Ocean from People, 2016

From Sea to Changing Sea: A Science Symposium about Oceans, 2016

Kerry A. Emanuel | Predicting and Adapting to Increased Hurricane Risk, 2016

Cloudy with a Chance of Solutions: The Future of Water, 2012

Something in the Air: Climate Change, Science, and Policy, 2011

Radcliffe’s Schlesinger Library on the History of Women in America is accessible to researchers inside and beyond Harvard University. The Schlesinger Library is a resource for discussion about not only the threats to archives that climate change presents but also its threats to the cultural heritage of vulnerable communities. Among the Library’s holdings, there are also collections that reflect the lived experiences and environmental activism of American women, including: