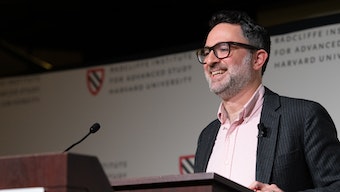 Play video
The Lost Book of Moses: The Hunt for the World's Oldest Bible

Chanan Tigay is an award-winning journalist and nonfiction writer who has covered the Middle East, 9/11, and the United Nations for such outlets as AFP, the Atlantic, GQ, and the New Yorker. His first book, The Lost Book of Moses: The Hunt for the World’s Oldest Bible (Ecco, 2016), tells the story of the oldest Bible in the world, how its outing as a fraud led to a scandalous death, and why archaeologists now believe it was real—if only they could find it. At once historical drama and modern-day investigation, the book simultaneously explores the 19th century disappearance of a controversial Bible and Tigay’s own hunt for the manuscript across eight countries and four continents.

As a fellow at the Radcliffe Institute, Tigay is working on a book about antiquities looting in the Middle East in the aftermath of the Arab Spring.

Tigay received a BA in political science from the University of Pennsylvania and an MFA in writing from Columbia University. He is an associate professor of creative writing at San Francisco State University, a member of the Sami Rohr Jewish Literary Institute, and the recipient of a fellowship from the Investigative Reporting Program at the UC Berkeley Graduate School of Journalism. As a journalist, he has interviewed such leaders as Hillary Clinton, John McCain, and the Israeli Prime Ministers Ehud Olmert and Shimon Peres. Most recently, he profiled Los Angeles Mayor Eric Garcetti. In 2018, Tigay starred in a two-hour special on the History channel, God Code.