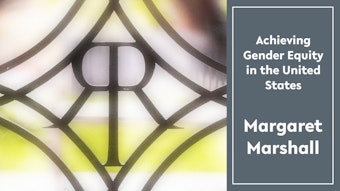 Claudia Goldin is the Henry Lee Professor of Economics at Harvard University and director of the National Bureau of Economic Research’s Development of the American Economy program. Goldin’s research is in American economic history. Many of her most recent papers on the rise of mass education in the United States and its impact on growth and inequality will form the core of a book, “The Race between Education and Technology” (with Lawrence Katz).

Goldin’s most recent papers about gender issues have explored the impact of “the pill” on women’s career and marriage decisions, women’s surnames after marriage as a social indicator, and why the majority of undergraduates are now women. Goldin has also explored the career and family trade-off among college-graduated American women in the past century. At the Radcliffe Institute, she will pursue a wide-ranging project on the family and career “transitions” of male and female graduates of selective universities from the late 1960s to the present.

Goldin has served as both president and vice president of the Economic History Association and as vice president of the American Economic Association. Her research has been funded by the National Science Foundation and the Spencer Foundation, and she has been a John Simon Guggenheim Memorial Foundation Fellow. She is the author or editor of several books, most recently Corruption and Reform: Lessons from America’s Economic History (with Edward Glaeser; University of Chicago Press, 2006). Goldin received her BA from Cornell University and her PhD from the University of Chicago.

Racial Wealth Gap May Be a Key to Other Inequities (Harvard Gazette, 6/3/21)