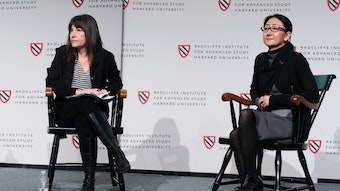 Esra Akcan is an associate professor in the Department of Architecture at Cornell University and the director of the Cornell Institute for European Studies. Akcan’s research on modern and contemporary architecture and urbanism foregrounds the intertwined histories of Europe and West Asia and offers new ways to understand architecture’s global movement as well as its role in global and social justice. Her most recent book, Open Architecture: Migration, Citizenship, and the Urban Renewal of Berlin-Kreuzberg by IBA-1984/87 (Birkhauser, 2018), develops a theory of open architecture as an appropriate response to the reverberations of migration on architecture and urbanism.

During her time at Harvard, Akcan is researching her next book project, which will explore architecture’s role in transitional justice after intense upheavals and internal conflicts, such as state violence, environmental disasters, civil wars, ethnic cleansing, and economic meltdown. This book will both critically examine opportunistic responses to crises that foreclose the right to heal and pinpoint best practices that move toward a more meaningful reconstitution.

Akcan received her architectural degree from Middle East Technical University, in Turkey, and a doctoral degree from Columbia University. She is the recipient of numerous awards, including from the American Academy in Berlin, the Canadian Centre for Architecture, the Clark Art Institute, the Getty Research Institute, the Graham Foundation, Humboldt University, and the Wissenschaftskolleg zu Berlin. She has authored five books in two languages, guest edited three journal issues, and published well over a hundred scholarly articles and critical essays in multiple languages.