Radcliffe: From College to Institute

Responding to calls for equal educational opportunities for women, Harvard President Charles Eliot warned in his 1869 inaugural address that the world “knew next to nothing about the natural mental capacities of the female sex.” In keeping with this belief, he rebuffed attempts to allow women to access a Harvard education. Undeterred, in 1879 a group of reformers founded the Harvard Annex, where women could receive instruction from Harvard faculty. The Annex was soon incorporated as the Society for the Collegiate Instruction of Women under the leadership of Elizabeth Cary Agassiz (1822-1907).

A decade later, the Harvard Annex had grown to include more than 200 students and, in 1894, it was chartered as Radcliffe College, with Agassiz as its first president. From the beginning, degrees were countersigned by the Harvard president to attest that they were, in Eliot’s words and despite his reservations, “equivalent in all respects to the degrees given to the graduates of Harvard College.”

Some 60 years later, women still faced barriers to educational opportunity. Radcliffe’s fifth president, Mary Ingraham Bunting, a noted microbiologist and educator, gained national prominence soon after joining Radcliffe, when she was featured on the front of Time Magazine. The cover article reported an intellectual crisis underway: “The proportion of girls in college has slipped from 47% in 1920 (a vintage feminist year) to 37% now. Only a little more than half of all college girls get a bachelor's degree. For every 300 women capable of earning a doctorate degree, only one does.” Bunting was among those leaders concerned by what they were witnessing. She memorably remarked, “Adults ask little boys what they want to do when they grow up. They ask little girls where they got that pretty dress.” (Time, Nov 3, 1961).

“Adults ask little boys what they want to do when they grow up. They ask little girls where they got that pretty dress.”

In order to combat the pervasive “climate of unexpectation” that was undermining the intellectual and creative lives of women, Bunting founded the Radcliffe Institute for Independent Study in 1960. So the seed of today’s Harvard Radcliffe Institute was planted. She designed a fellowship program to provide time, financial support, community, access to the University’s resources, and “a room of one's own” to woman scholars and artists.

The Institute’s work continues to be shaped by this history. Radcliffe’s defining commitment to women and the study of gender endures in the Institute’s programs and the world-class collections of its Schlesinger Library. But the legacy of Radcliffe College is not simply coeducation at Harvard; it is the recognition that universities will always be greater when they draw wisdom and talent from the widest possible pool. This principle has guided Radcliffe’s work for nearly a century and a half. 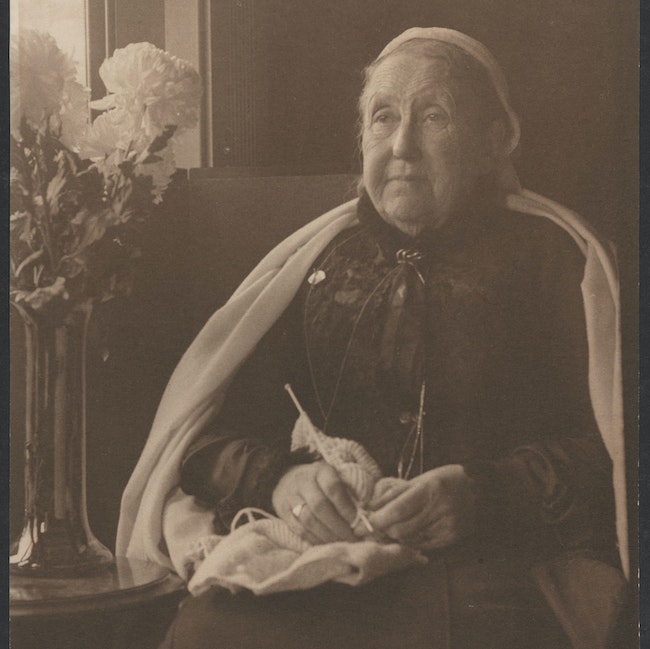 Elizabeth Cary Agassiz (1822-1907) served as the first president of the Society for the Collegiate Instruction of Women, which enabled women to receive instruction by Harvard faculty. When Radcliffe College is chartered, Agassiz becomes its first president. 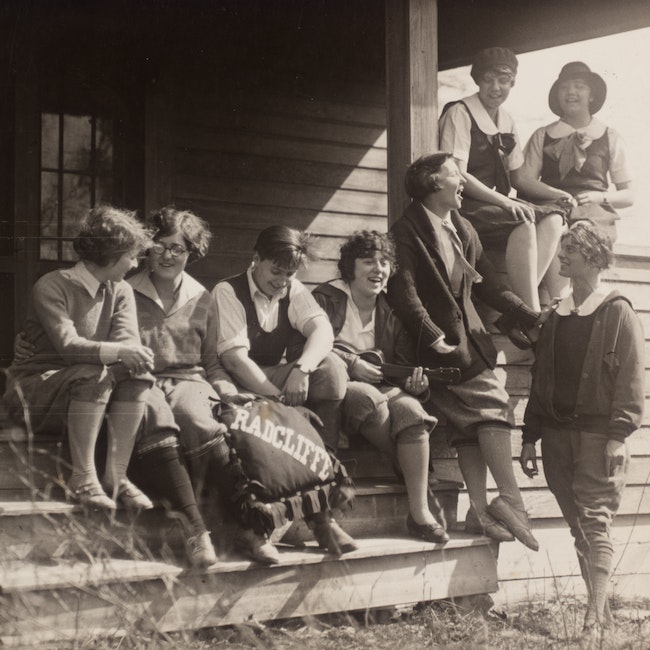 Radcliffe College is chartered by the Commonwealth of Massachusetts, named to honor of Ann Radcliffe, Lady Mowlson, who was responsible for establishing Harvard College’s first undergraduate financial aid scholarship fund in 1643. 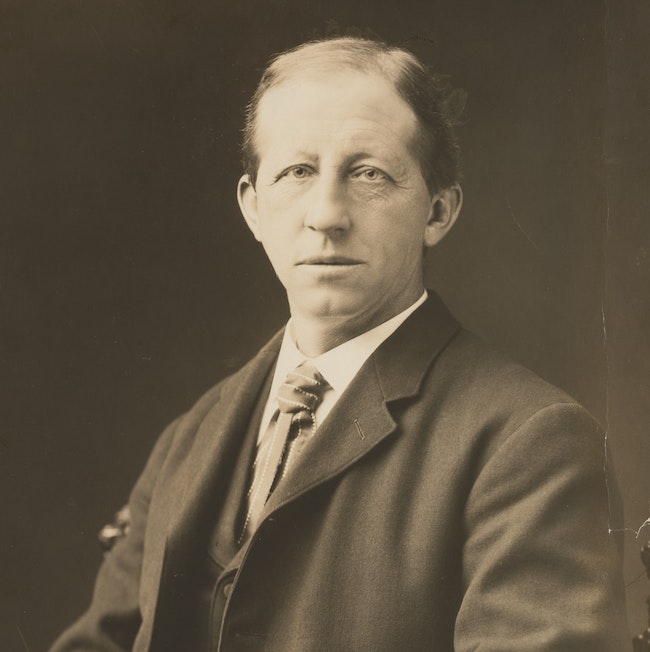 Le Baron Russell Briggs becomes the second president of Radcliffe. During Briggs’s tenure, the College purchased the Greenleaf estate and added five new dormitories. Before Briggs left office, he wrote, “I believe...Radcliffe will become a women’s college in Harvard, but that neither institution is as yet prepared for such a union.” 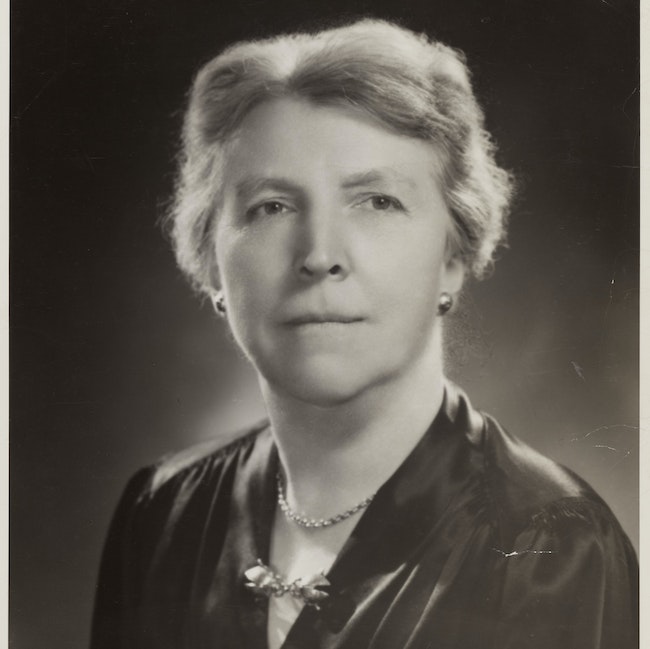 Ada Louise Comstock becomes the third—and first full time—president of Radcliffe College. In 1943, Comstock and Harvard’s dean and president reached a Harvard-Radcliffe agreement for joint instruction, which was an important step forward for women at Harvard. The agreement did not, however, require coeducational classes. 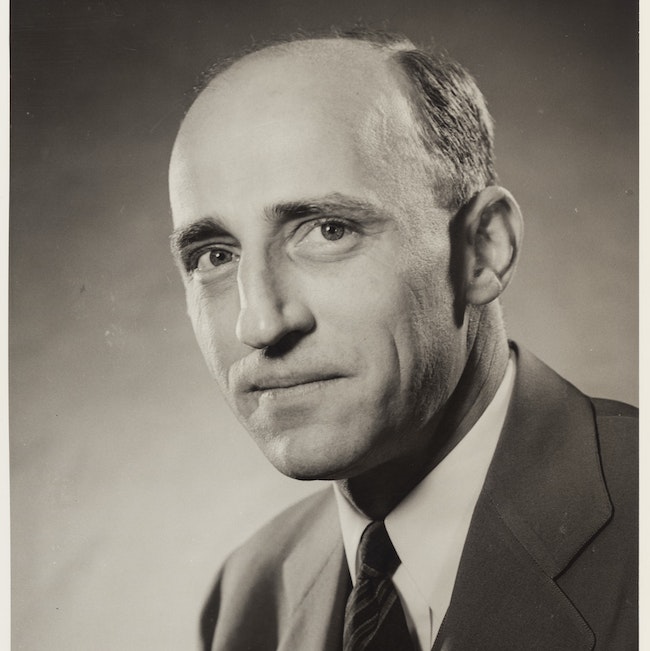 Wilbur Kitchener Jordan becomes the fourth president of Radcliffe College. Among his achievements, after Maud Wood Park, Class of 1898, gave her suffrage collection to the College in 1943, Jordan worked with Arthur M. Schlesinger to ensured that these records became the cornerstone of the Women’s Archives at Radcliffe 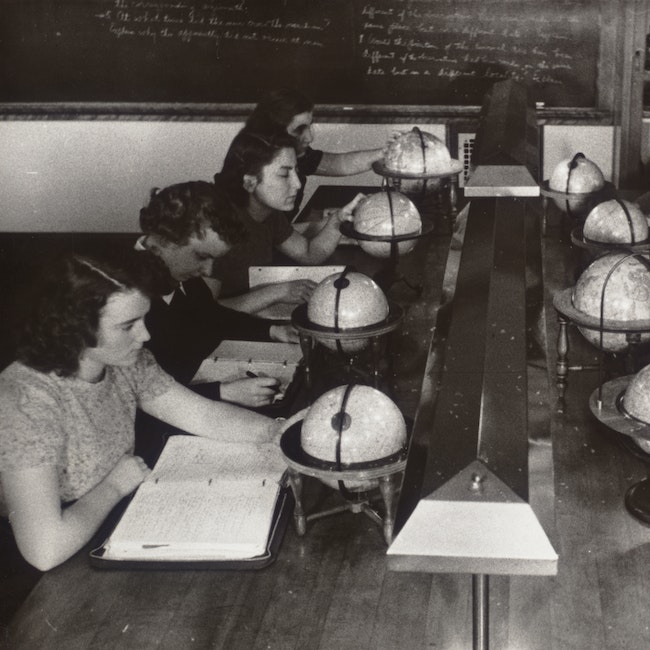 During World War II, Harvard and Radcliffe sign an agreement opening Harvard classrooms to women students for the first time. 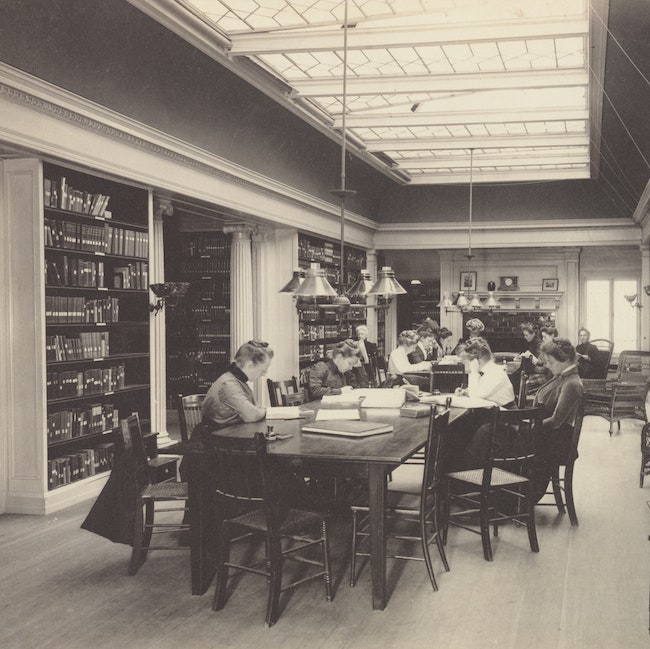 Maud Wood Park's suffrage papers, which were donated in 1943, form the nucleus of the Schlesinger Library on the History of Women in America. The Library’s opening ceremonies are held on the 23rd anniversary of the signing of the 19th Amendment. 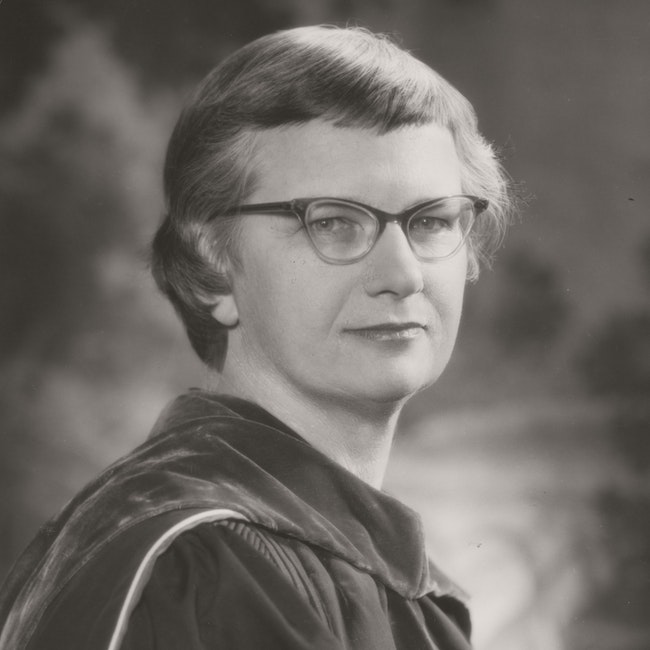 Mary ("Polly") Ingraham Bunting becomes the fifth president of Radcliffe College. Concerned about the “climate of unexpectation” facing women, Bunting establishes a community of scholars, scientists, and artists known as the Radcliffe Institute for Independent Study, later renamed in her honor. 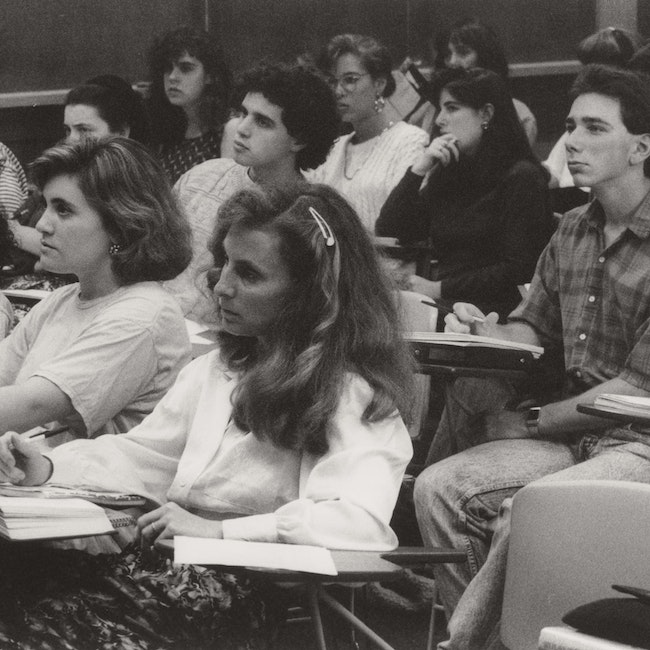 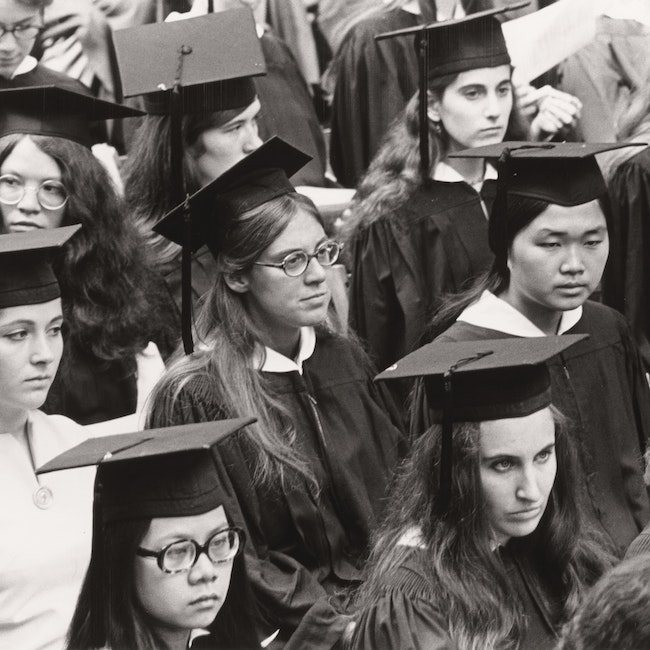 The first joint Harvard and Radcliffe commencement is held in Harvard Yard. 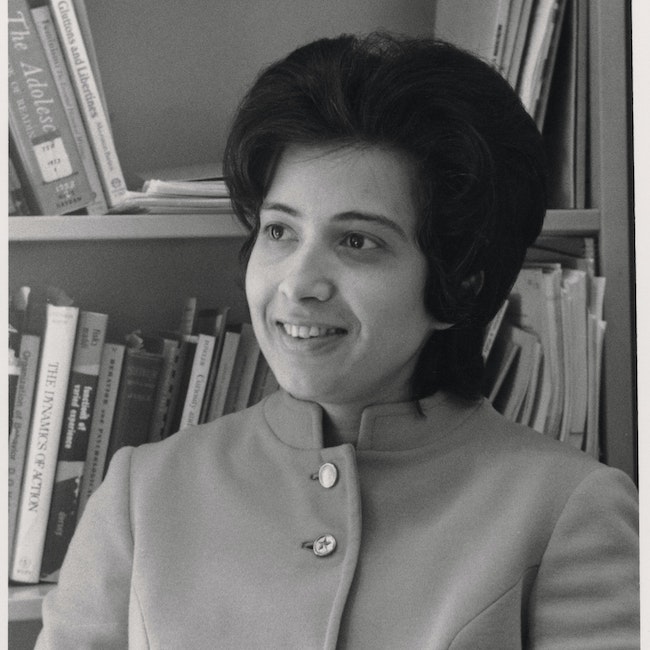 Matina Souretis Horner becomes the sixth president of Radcliffe College. During her presidency, the Harvard and Radcliffe offices of admissions merge, the quota for women students is abolished, and Harvard Yard is opened to female residents. 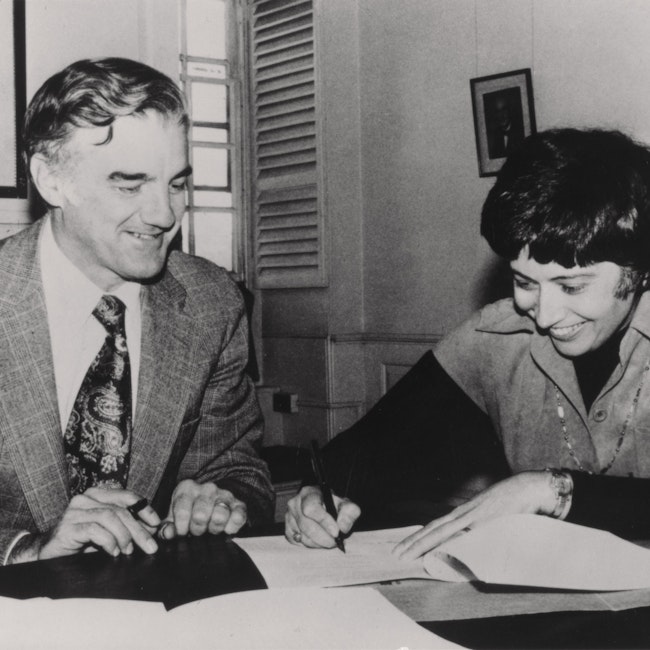 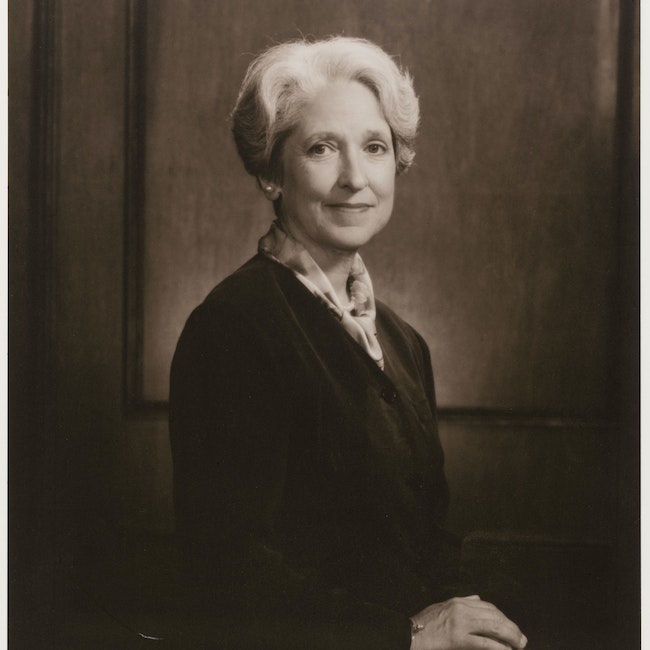 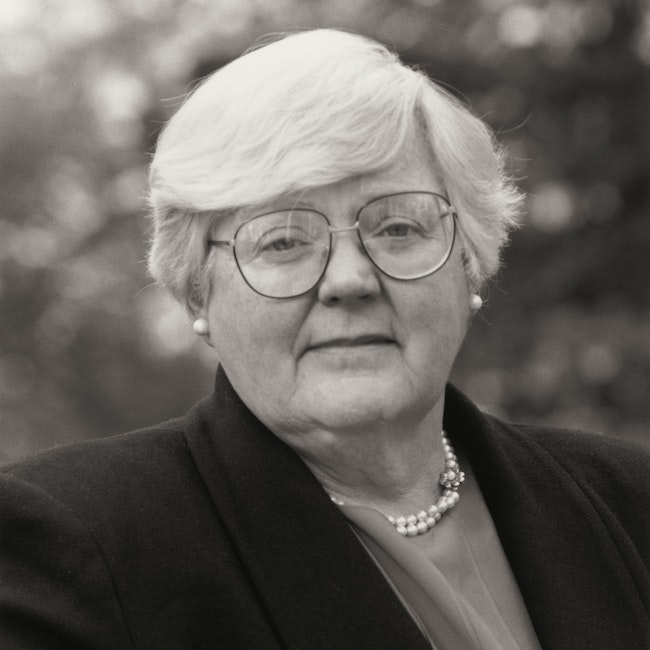 Radcliffe College and Harvard University officially merge, thereby establishing the Radcliffe Institute for Advanced Study at Harvard, where individuals pursue advanced learning at its outermost limits and create new knowledge in every field from poetry to biomimetics. Mary Maples Dunn serves as acting dean of the Radcliffe Institute. 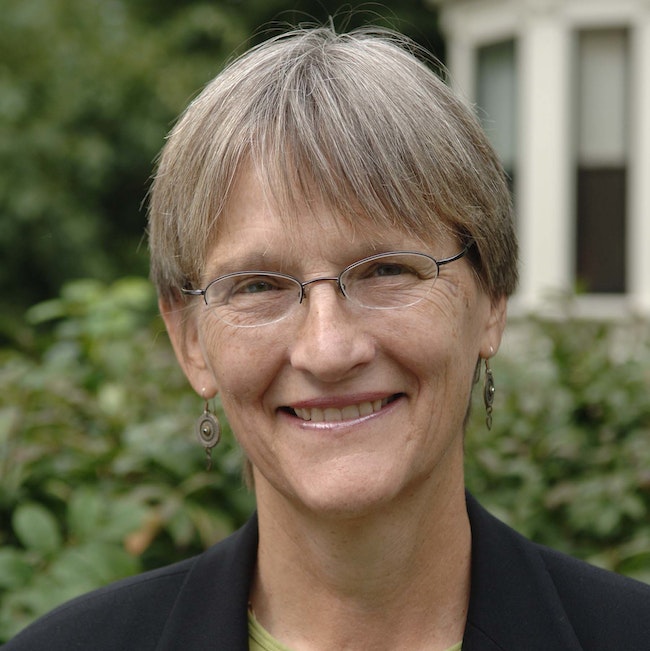 Discovery of the Radcliffe Wave Rocks the Scientific World

Astronomers Alyssa Goodman and João Alves announce, in January 2020, the discovery of a gaseous structure—the largest ever seen in our galaxy—made up of interconnected stellar nurseries. The discovery transforms a 150-year-old vision of the Milky Way. Dubbed the “Radcliffe Wave” in honor of the Institute, where this project was developed and where Alves discovered visual artist Anna von Mertens's work on Radcliffe graduate Henrietta Leavitt, which he credits with helping the team of astronomers to “see more.”

Read about the creative inspiration behind the Radcliffe Wave
02 / 09

In 2020, Radcliffe’s Schlesinger Library receives national media attention when the #metoo Digital Media Collection is opened to researchers. A powerful example of the need to invest in “born digital” archival preservation, the #metoo archive documents the digital footprint of the #metoo movement and the accompanying political, legal, and social battles in the United States.

Economist Michael Kremer, Radcliffe’s 2013–2014 Katherine Hampson Bessel Fellow, and two colleagues from MIT win the 2019 Nobel Prize in Economics for their pioneering use of field experiments to assess the effectiveness of anti-poverty programs.

The Papers of Angela Davis Acquired by Radcliffe's Schlesinger Library

In February 2018, Radcliffe’s Schlesinger Library on the History of Women in America announces its landmark acquisition of the papers of activist and feminist thinker Angela Y. Davis. Jane Kamensky, the Carl and Lily Pforzheimer Foundation Director of the Library, describes the Davis papers as "a remarkable collection documenting a remarkable life."

Radcliffe Organizes Conference to Explore the History of Universities and Slavery

On March 3, 2017, Harvard Radcliffe Institute’s daylong conference “Bound by History,” featuring a keynote conversation between Ta-Nehisi Coates and Drew Gilpin Faust, explores the relationship between universities and slavery, across the country and around the world. The event draws researchers from more than 30 universities and is an important step in Harvard’s reckoning with its own history.

The October 2016 opening of "teamLab at Radcliffe: What a Loving and Beautiful World" serves as the inauguration of the Johnson-Kulukundis Family Gallery, a unique space created at Radcliffe to showcase artistic experimentation and dialogue. The multimedia exhibition by teamLab immerses viewers in a dreamlike world that is digitally generated and interactive. Based in Japan, teamLab is an interdisciplinary consortium of artists, engineers, and computer scientists.

Supreme Court Associate Justice Ginsburg is awarded the Radcliffe Medal in May 2015. She is lauded by Dean Lizbeth Cohen, as “a passionate advocate for equality and a dispassionate jurist for justice.”