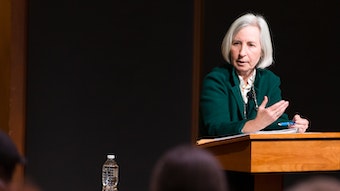 Play video
Should Law Foster Forgiveness?: Child Soldiers, Sovereign Debt, and Alternatives to Punishment Harvard & the Legacy of Slavery: Reckoning with the Past to Understand the Present

Martha Minow’s scholarship and advocacy pursues human rights with a particular focus on advocacy for members of racial and religious minorities and for women, children, and persons with disabilities and on responses to ethnic and religious conflict. She is the Carter Professor of General Jurisprudence at Harvard Law School, where she served as dean between 2009 and 2017.

Her current work considers whether and when legal systems and rules should promote forgiveness. When people violate criminal laws, fail to pay debts, or run afoul of immigration laws, should law promote forgiveness by those who have been harmed? When should governments pursue amnesties, pardons, or alternatives to legally authorized sanctions? What should be unforgiveable? Looking at issues within the United States and at international debates over sovereign debt and treatments of child soldiers, the project considers legal, historical, religious, and cultural resources.

Minow received her AB from the University of Michigan, EdM from the Harvard Graduate School of Education, JD from Yale University, and nine honorary degrees. Her books include In Brown’s Wake: Legacies of America’s Constitutional Landmark (Oxford University Press, 2010); Between Vengeance and Forgiveness: Facing History after Genocide and Mass Violence (Beacon Press, 1998); and Making All the Difference: Inclusion, Exclusion, and American Law (Cornell University Press, 1990). She serves as vice chair of the board of the Legal Services Corporation, supporting civil legal assistance for low-income Americans, and previously founded the Imagine Coexistence Project with the United Nations High Commissioner for Refugees.